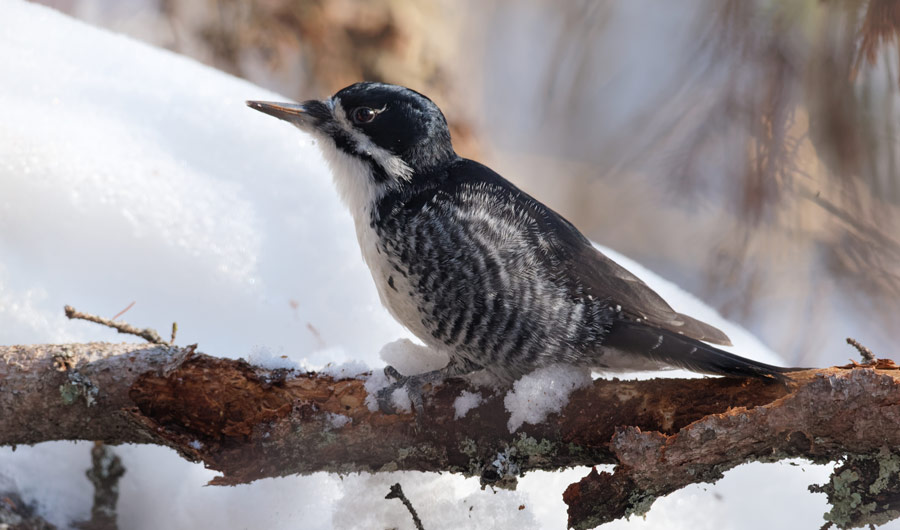 (Inside Science) -- After the fire, life rises from the charred woods in forests across the Western U.S. But too much fire might leave only ashes, at least for certain species.

In California, where climate change is worsening the state's wildfires, the black-backed woodpecker (Picoides arcticus) nests in recently burned trees that still stand. Called snags, the dead trees provide shelter and food. “A forest of dead trees is like a plaza of fast food restaurants” for these birds, because they eat the larvae of beetles that live in the dead wood, said Andrew Stillman, an ecologist and doctoral candidate at the University of Connecticut in Storrs. 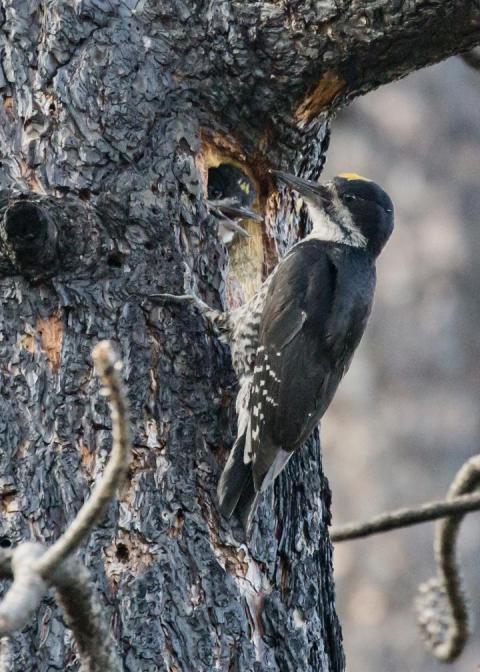 A black-backed woodpecker visits its nest in a burned tree trunk.

Still, not all fires are necessarily good for the birds. In a new study, published today in The Condor: Ornithological Applications, Stillman and his colleagues analyzed the nesting pattern of black-backed woodpeckers after six wildfires in Northern California. After monitoring 118 nests for eight years, they found that the woodpeckers prefer to nest in highly burned patches, but near the edges -- within 500 meters (1,640 feet) of unburned areas.

In previous research, Stillman and his team also found that while the adults liked to stay around snags, the fledglings preferred to live in areas with more live trees. He emphasized that this species needs “pyrodiversity” -- areas with different sizes and intensities of fire -- so there are more edges where both adults and fledglings can thrive.

The increasing frequency of “megafires” -- wildfires that burn more than 10,000 hectares -- may eventually decrease this pyrodiversity in California, since big fires burn large patches with high severity, Stillman said. This could negatively impact a population some researchers argue is already at risk in the state. In 2010, scientists at the Earth Island Institute and the Center for Biological Diversity tried to list the black-backed woodpecker as threatened under the California Endangered Species Act. They argued that the Californian population was reduced to as few as 161 pairs as a result of the U.S. Forest Service’s policies of fire suppression and logging snags after a wildfire. But four years later, the California Fish and Game Commission decided not to grant the bird the protected status, citing a lack of information at the time showing the importance of burned forest for the woodpeckers.

Changing fire management techniques may help the birds, Stillman said. Although the study did not look into benefits of prescribed fires on the woodpecker’s habitat, he said that these types of controlled fires are very important. By studying wildlife, he added, scientists can help provide the information needed to manage forests after they burn.

This way, “we can promote both health of the forest and health of wildlife communities, and also promote the need for humans to reduce the risk of megafires in the future,” Stillman said.

Protests, A Retracted Paper, and a Super-Earth Planet
Why Is an Empty Shampoo Bottle So Easy To Knock Over?
COVID-19 Vaccine, Monkeys and Bumblebees
Smart Speakers Could Detect Cardiac Arrest
Light And Art Come Together
END_OF_DOCUMENT_TOKEN_TO_BE_REPLACED