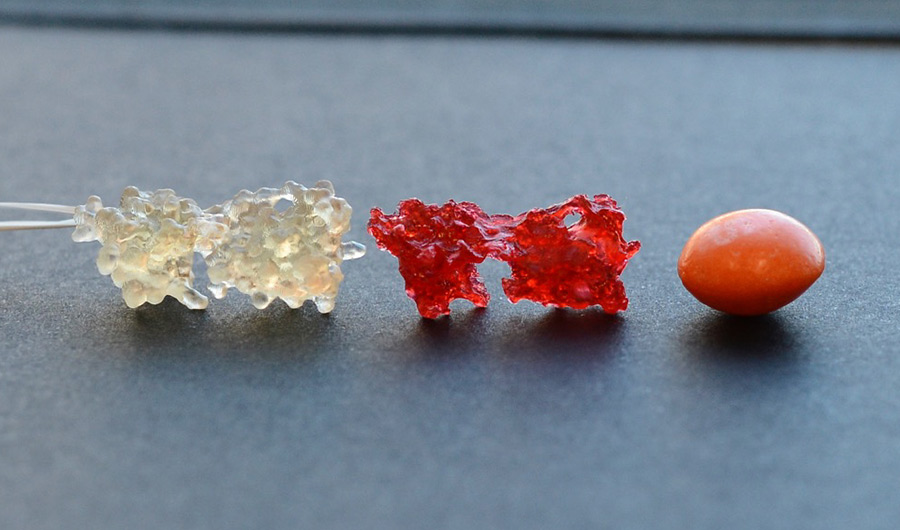 (Inside Science) -- Bite-size, candylike 3D models could help students -- especially those with blindness -- visualize molecules with their mouths about as well as they can with their eyes or hands, a new study finds.

Roughly 36 million people worldwide are blind, including 1 million children. Students who are blind often use handheld models to help them envision complex 3D objects such as molecular structures. However, such models can prove large and expensive, making it impractical to provide a model for every corresponding picture in a textbook, often leaving blind students without the same chances to learn about these structures as those with sight.

Biochemist Bryan Shaw at Baylor University in Waco, Texas, wondered how well students might fare with tiny models they could probe not with their hands, but with their tongues. "The tongue is our finest tactile sensor," Shaw said. "It is twice as sensitive as our fingertips."

Now, using 3D printing and silicone molds, Shaw and his colleagues have created millimeter-scale models of proteins that can fit in the mouth. Made from either edible gummy bear gelatin or nonedible surgical resin, each model is roughly the size of a peanut or a grain of rice.

The inspiration for this work began with a birthday party for Shaw's 10-year-old son Noah, who lost one eye during infancy to cancer and has partial vision in his remaining eye. One 3-year-old boy at the party was completely blind, and while crawling around, would pop items in his mouth.

"I thought, 'That sense of touch, by mouth, must be important to him,'" Shaw recalled. A short time later, while Shaw was eating blackberries, he noticed the bulbous shape of the fruit "was sort of like the electron clouds in molecules," he said. "Sometimes an idea comes like a light bulb."

Eight different models of proteins, whose functions often depend greatly on their folded shapes, were tested with 281 blindfolded sighted college-age students. The volunteers could recognize the 3D structures with their mouths with roughly 85% accuracy, similar to how well they could recognize them not just by hand while blindfolded, but also visually from computer animations.

"I knew the mouth would be good at visualizing these molecular models, but I didn't think it would be as good as eyesight," Shaw said. "And none of the students were trained to recognize the molecules using their mouths. That just suggests tactile sensing with our mouths is a very intuitive, natural thing, perhaps going as far back as the 'rooting reflex' as newborns look for their mother's nipple to breastfeed."

The idea of being able to experience these proteins in a new way "is truly amazing," said chemist Ashley Neybert at Independence Science in West Lafayette, Indiana, who did not participate in this study. "As a blind student, I had some difficulty getting some of the necessary models for my studies and had to create several models myself."

The scientists noted they could add different flavors to these models that could help encode details about the molecules -- for instance, blueberry or cherry flavors could reflect whether parts of a molecule's surface are positively or negatively charged. Since previous work has found tastes and scents can be strongly linked with memories, perhaps flavors added to these models could help students remember more about molecules, Shaw added.

"It is common for young children as they mature and conduct investigations of their surroundings to put items into their mouths," said chemist Cary Supalo, a research developer at the Educational Testing Service in Princeton, New Jersey, who is blind and did not take part in this research. "By returning to one of our first ways of exploring the world, future research in this area may unlock this previously untapped approach to sparking children's wonder and interest in scientifically investigating their world."

The researchers noted that none of the volunteers in this study were blind or had low vision, save one, Shaw's son Noah.

"Being blindfolded is not equivalent to being blind," Supalo said. "This study may have been enhanced if the authors included more blind and low-vision participants." Neybert agreed that future research should incorporate more blind students, "but it is always a challenge to get statistically significant results from these populations due to numbers, so it might have to be a more qualitative study."

All in all, the researchers suggested these bite-size molecular models are likely cheaper and easier to make, store and transport than conventional models. They added one could easily create models of any 3D structure, such as organelles within cells, and produce them from a variety of materials, such as taffy or chocolate.

Shaw also noted hand models still likely have some advantages over bite-size versions. For instance, large models allow more detailed inspections, and it may also be easier to compare two different models at the same time with both hands.

One concern with these models is that they could be choking hazards. Shaw noted the nonedible versions each had an eyelet for a safety lanyard made of thread or dental floss or could be 3D-printed with lollipop sticks. Still, eating anything in a science class is often strongly discouraged because of various risks, like the presence of dangerous lab chemicals. "It would be important to mitigate risks -- for example, through ensuring clean components and properly stored and prepared items," or eating these models outside a lab setting, Supalo said.

All in all, such models could prove useful for sighted and blind students. "Three-dimensional models are for everyone," Shaw said.

The scientists detailed their findings online May 28 in the journal Science Advances.