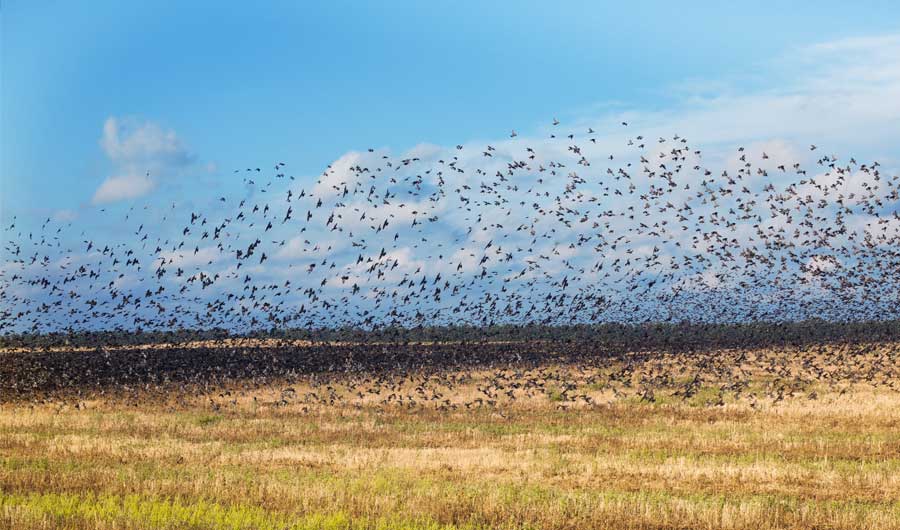 (Inside Science) -- The first documented collision between a bird and an airplane was reported by the Wright brothers in the early 1900s. Now, about three dozen bird strikes happen each day in the United States, with 5 to 7 percent damaging the plane, according to Michael Begier, the Department of Agriculture’s National Coordinator for the Airport Wildlife Hazards Program.

Scientists, government planners and airports are working together to try to bring the number down.

In a study published in the upcoming issue of Agriculture, Ecosystems & Environment, scientists found that changing the type of agricultural crops planted around airports could reduce the risk of bird strikes.

“Although the [Federal Aviation Administration] recommends against planting agricultural crops in and around airports, it is still a curse,” said Mississippi State University wildlife ecologist Raymond Inglay, the lead author on the study. When airports have extra land, it is not uncommon for them to lease it to farmers for agriculture. Inglay’s study aims to determine which crops are better for air safty, based on the type and number of birds they attract.

The FAA received reports of 51,826 collisions between birds and civil aircraft between 2009 and 2015, with numbers increasing each year. The frequency of animal-vehicle collisions grows as more people move around, both in the air and on the roads, said Travis DeVault, a wildlife research biologist with the U.S. Department of Agriculture and another author on the study. “Most people are familiar with the problem from driving and nearly hitting animals occasionally," he said. He studies how land use decisions impact the problem.

The FAA ranks bird species based on how hazardous they are to airplanes. For example, large flocks of European starlings are more hazardous than species that tend to fly solo, like the meadowlark. The Canada goose, the undoing of US Airways Flight 1549 in the “Miracle on the Hudson,” is high on the list. “If we can make an airport that is less attractive to hazardous species, then that would be great,” Inglay said.

To figure out how that might be done, the team used a standard bird survey method called a point-transect on 22 wheat, corn or soybean farms near Oak Harbor, Ohio. Scientists trained in bird identification stood at the edge of the field, counted the birds they observed, and used a rangefinder to estimate the distance between the bird and observer. Over two years, they counted more than 4,000 birds of 40 different species.

“All three crops don’t look good in terms of aircraft safety,” Inglay said. “However, most farmers in that area do crop rotation. We determined it was better to keep your crop as soybeans.” The soybean fields they observed had fewer flocking birds than the corn and wheat fields, which often had large groups of starlings, presenting a higher potential for bird strikes.

Yet keeping the crops as soybeans could pose a quandary for farmers because crop rotation benefits the farm in many ways. It can boost soil quality, reduce weeds and help manage pests. For example, having a break from soybeans could boost the crop yield by diminishing the survival ability of a common soybean parasite, the soybean cyst nematode.

This study is one of the few to investigate which birds use crop fields, Inglay said, and there is still more work to do. To make more comprehensive recommendations to airports, the scientists plan to compare their agriculture results with other types of ground covers, including turf grass, the typical “front lawn” for many airports. The grass is not ideal either, DeVault added, since the soil environment is sterile and maintenance contributes to carbon dioxide emissions. One goal of the work is to find viable options to reduce both turf grass and bird strike hazards.

Begier, whose role with the Airport Wildlife Hazards Program is to assist with wildlife mitigation at airports, welcomes this type of research. “We have a responsibility to make recommendations based on research with science underpinnings,” he said.

Airports use a variety of techniques to keep birds away from planes. According to Begier, the best thing to do is make the surrounding habitat less attractive to birds. “This research allows us to give more focused habitat recommendations so wildlife are less likely to be near the airport and the probability of an incident occurring is lower,” he said.

In addition to determining which agricultural crops pose the least strike threats, scientists are considering other types of land use such as solar panels and storm water retention ponds. DeVault said it is up to the airports and farmers to decide how to use their land.

“The goal is not to come up with a single solution for all locations, but to come up with a suite of alternative land uses that an airport can choose for their situation,” he said. A better understanding of how landscapes attract wildlife should lead to safer airports for birds and humans.

Protests, A Retracted Paper, and a Super-Earth Planet
Why Is an Empty Shampoo Bottle So Easy To Knock Over?
COVID-19 Vaccine, Monkeys and Bumblebees
Smart Speakers Could Detect Cardiac Arrest
Light And Art Come Together
END_OF_DOCUMENT_TOKEN_TO_BE_REPLACED