From Caves to Stonehenge, Ancient Peoples Painted with Sound 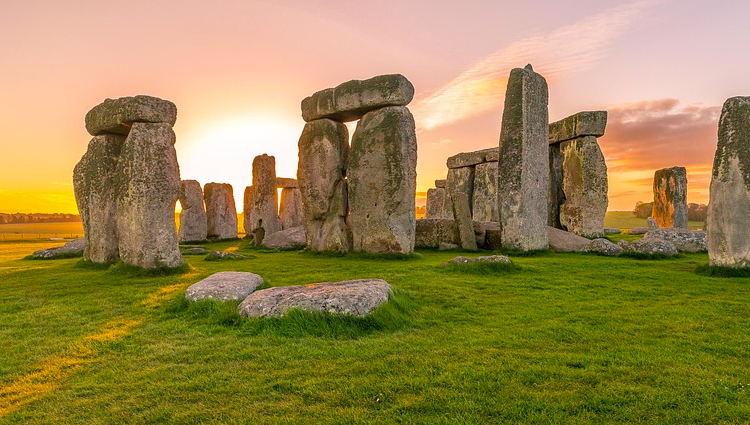 (Inside Science) -- Stone Age cave paintings evoke reverent silence in most people. But David Lubman, Miriam Kolar, and Steve Waller prefer to shout and clap instead.

They are among a growing number of researchers probing the acoustic properties of ancient sites. Their research, presented this week in Vancouver, British Columbia at the meeting of the American Association for the Advancement of Science, shows that ancient peoples created sophisticated sonic illusions in ceremonial spaces ranging from Mayan temples to Stonehenge.

Lubman, a consultant in acoustics, speculates that the association between art and echoes was originally unintended. Instead, ancient artists painted on solid rock because porous rock absorbed their pigments. Solid rock created better echoes.

Paleolithic musicians may have used caves to amplify and focus music, just as choirs use vaulted churches today.

Many civilizations created sophisticated sonic illusions. The Mayans built two of the most impressive at Chichen Itza, a ceremonial site in Mexico, 1,000 years ago.

At a pyramid temple, the pairing of seasonal shadows and sound reflection produces a striking combination. Starting on the spring equinox, in which day and night are equal lengths, a shadow glides down the temple steps and, over several days, transform into different shapes as it moves across the courtyard.

Most scholars believe the shadow represents the serpent god Kulkulkan wearing feathers of the resplendent quetzal, a bird the Mayans called the messenger of the gods.

Lubman thinks the shadow is the bird itself. Its path down the temple represents the straight-down mating dives of quetzal males, wings folded and tail feathers fluttering, that occur at spring equinox. Lubman believes priests stood at the bottom of the temple and clapped their hands. Each of the temple's 91 stairs scatter the sound. Together, they reflect back a series of echoes that makes a tonal sound resembling a quetzal's chirp. Lubman suggested that Mayan priests used this uncanny echo to reinforce their role as interpreters of their gods' messenger.

Lubman also studied the sonic illusions Chichen Itza's ball court. At 541 feet long and 240 feet wide, it was the largest in Mesoamerica, with walls on two sides and small temples at either end.

The temples formed a whispering gallery that amplified sounds spoken within them. A person speaking in a normal voice in one temple could be heard by those standing in the other temple 540 feet away, and to players on the ball field. Such voices would have sounded like they were coming from thin air.

"They could create other sounds, like a whooping bird flying from left to right," Lubman said. "The ball court was a matter of life and death for the players, and priests could also make sounds that sounded like fierce animals, such as rattlesnakes and jaguars."

Further south and 1,500 years earlier, the Chavín culture in the Peruvian Andes built a maze-like ceremonial building at Chavín de Huántar. Its air vents, hallways, and chambers were linked to amplify and direct sounds, said Kolar, a graduate student at Stanford University's Center for Computer Research in Music and Acoustics.

Kolar found carvings of conch shell trumpets at the site. She tried playing them in the building, and found that its coupled passages amplified their frequencies and directed them towards three openings in front of the building.

She tested her hypothesis by having two musicians play conch shells.

"It creates a wavering sound that vibrates the whole body. It feels like it is coming out of the floor," Kolar said.

Meanwhile, Waller, who has a doctorate in biochemistry but studied archeological acoustics for decades, argues that the design of Stonehenge, in the United Kingdom, might be based on a sonic illusion.

To see how ancient people might have heard these interference patterns, Waller attached an air pump to two flutes in an open field and circled them as they played the same note. He found their interference pattern created alternating loud and quiet areas.

"Sometimes it sounded like there was something between me and the pair of flutes, and other times I felt the noise easily getting through," Waller said.

He repeated the experiment with blindfolded volunteers, then asked them to draw what the experiment looked like. Most drew flutes surrounded by large stone monoliths, trees, or walls.

"When we removed the blindfolds, it was like, 'Whoa!' They could not believe there was nothing there," Waller said.

Most archeologists believe Stonehenge was designed as an astronomical observatory starting 5,000 years ago. Claims that it is based on an acoustic illusion may be a stretch.

Yet it took decades for researchers to convince archeologists that ancient humans understood astronomy as well as they apparently did. Our understanding of what humanity knew about sound is still evolving.

It poses questions best answered by shouting and clapping.

Alan S. Brown is a long-time freelance writer who has written extensively about science, engineering, technology-related businesses and technology policy