Snake species recycles poison collected from its own prey.
Image 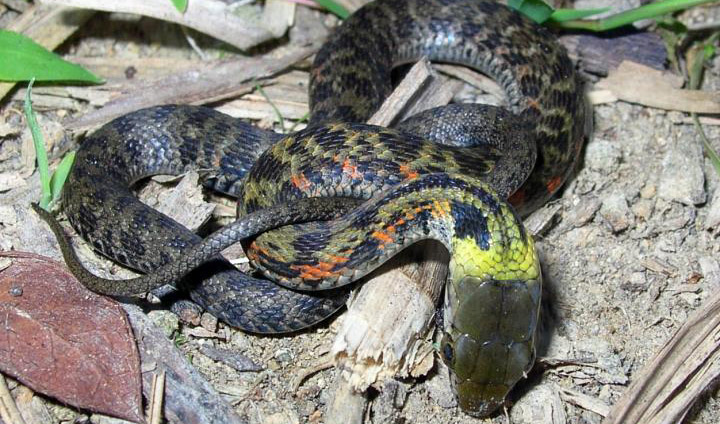 (Inside Science) -- Keelback snakes are master chemists. These unusual snakes possess glands in their skin that contain heart-stopping toxic steroids to defend against predators. When an attacker tries to eat them, the glands rupture, releasing a mouthful of potentially fatal poison.

But these snakes, native to China, Japan and Southeast Asia, don't have the biochemical machinery to produce these toxic chemicals themselves. Instead they gather them from their own prey -- poisonous toads -- and repackage them into their own chemical defense.

About 15 million years ago, however, some species of keelback snakes in China changed their diet -- they switched from eating toads to eating earthworms. But somehow they retained their glands and kept them filled with poison.

"When we investigated the worm-eating species and found they still posses the toxins but the worms they were eating did not, then the hunt was on for the source of the toxins," said Alan Savitzky, a herpetologist at Utah State University in Logan.

The researchers didn't have to look far. The toxins the snakes use are called bufadienolides, a class of steroid toxins related to those in the foxglove plant. They are rare in the animal kingdom. "Only two groups of animals are known to produce these toxins themselves, toads and fireflies," said Savitzky.

Working with the world’s foremost expert on keelback snakes, Akira Mori from Japan's Kyoto University, Savitsky and his colleagues determined that the worm-eating species were indeed feeding on firefly larvae, and that the bufadienolide toxins in their glands were chemically similar to the firefly version, but not the toad one. Their work was published last week in the Proceedings of the National Academy of Science.

It's the first recognized example of a predator switching its prey and maintaining a chemical defense, said Savitzky, but the researchers aren't sure how the snakes knew to make the switch. It's possible that they are able to detect the presence of the toxin itself, by picking up chemical cues called vomodors with their flicking tongues. For now, though, it remains an evolutionary mystery.