Chimps May Play Dumb to Fit In

Migrating chimpanzees appear to conform to local nut-cracking culture, even when they know a better way.
Image 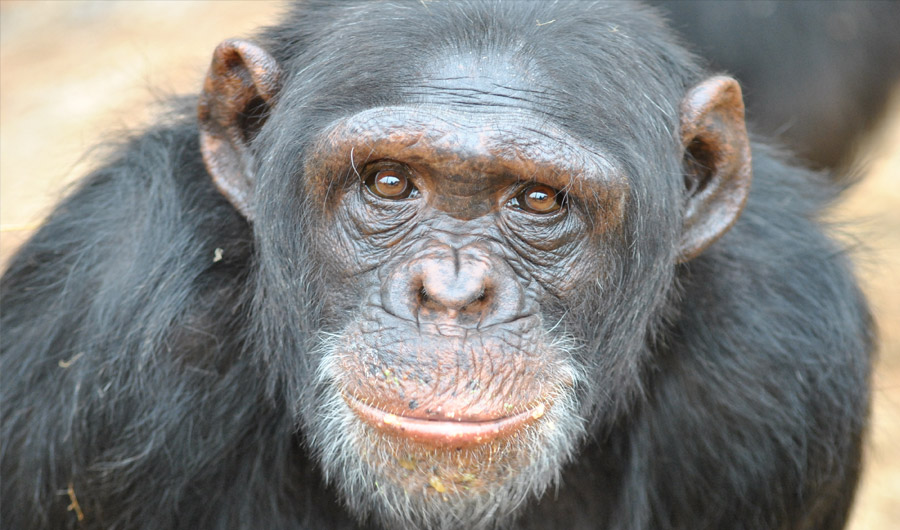 (Inside Science) -- Doing something just for the sake of fitting in may seem like a uniquely human sort of foolishness. But now, it appears that our closest primate relatives may also partake in such conformist behavior.  A combination of direct and circumstantial evidence suggests that when chimpanzees migrate to new groups, they will abandon their old technique for cracking nuts and adopt the method of the local culture -- even when that method is less effective.

"The possibility that they do so even if that might compromise individual fitness and foraging success is very surprising," wrote Lydia Luncz, an anthropologist and primatologist at the University of Oxford in England, in an email to Inside Science. "There must be a strong social benefit in exchange for it."

More on chimpanzee research from Inside Science:

A Chimp's Point Of View

The research focused on three neighboring communities of chimpanzees in Taï National Park in the Ivory Coast. Chimpanzees in all three groups rely primarily on coula nuts for food during the four-month-long coula nut season. They crack coula nuts by bracing them against tree roots, then striking them with "hammers" of wood or stone.

"A skilled nut cracker can make it look so easy," Luncz recalled. "It wasn´t until I tried myself that I realized how much experience and practice goes into this."

In three studies published over the past seven years, Luncz and her colleagues found that each of the three groups has its own nut-cracking customs. The South group uses primarily stone hammers for the entire nut season, but the East and North groups use more and more wood as the season progresses. This shift may reflect the fact that coula nuts get softer and easier to crack late in the season. Chimps in the East group show an especially strong tendency to choose wood late in the season, and they also wield their hammers differently, using fewer strikes per nut than the other two groups.

The differences between the groups probably aren't due to differences in environment, because the researchers found the same abundance of wood and stone in all three chimpanzee territories. They can't be explained by genetics either, because the customs of each group remain consistent even as individual chimps migrate between groups. Instead, the nut-cracking customs appear to be an example of culture.

In a new study published in the March issue of the journal Animal Behaviour, Luncz and her colleagues investigated whether these cultural variations are equally efficient, or whether some come at a cost. In each group, they recorded what types of hammers chimps used to crack nuts, how many times they hit each nut, and how many nuts they ate per minute.

Stone hammers clearly worked better than wood throughout the nut-cracking season. In addition, chimps did better when they used a larger number of light, precise strikes, rather than a few hard strikes. Hard strikes can smash nuts, forcing chimps to waste time collecting broken pieces, according to the researchers.

The East group was less efficient at cracking nuts than the other two groups, apparently because of its penchant for hard strikes and for wooden hammers late in the season. The researchers estimated that compared to a South-group chimp, an East-group chimp would eat about 5,400 fewer nuts per season, translating to a nutritional cost of 74,000 calories.

The researchers were not able to analyze the time and effort chimpanzees spent obtaining hammers, because it's not obvious to observers when chimps are looking for hammers. But Luncz acknowledged that wood is more abundant in the chimps' habitat than stone, so some of the advantages of stone hammers might be offset by the effort needed to find one. The difficulty of finding stone hammers could also be why some groups use more wood late in the season, according to Luncz.

Female chimpanzees typically join new groups when they reach adulthood, so each group's adult females presumably abandoned the nut-cracking methods they grew up with in order to adopt the local custom. The researchers even managed to observe such a shift in one female named Diva, who gradually switched from wooden to stone hammers after joining the stone-loving South group in 2007.

The researchers have not yet observed a female migrating into East group and adopting that group's less efficient customs. But the researchers infer that this likely happens, or else the East group would use a more efficient technique.

Why might a chimpanzee switch to a sub-optimal method when she already knows a better one? It's possible the switch is part of a larger strategy that works out well on average, even if it results in a few bad decisions, said Giulia Sirianni, a primatologist at the Max Planck Institute for Evolutionary Anthropology at Leipzig, Germany and one of the study's authors. A chimp may be wise to copy all her new group's behaviors by default, assuming that in most cases, they know best how to survive in their environment.

But there's also the possibility of peer pressure. The researchers have not observed any obvious cases of chimps punishing each other for "wrong" nut-cracking methods, or otherwise trying to pressure one another to crack nuts differently. But that doesn’t necessarily mean such social pressures don't exist. While the new study focused on nutritional costs from eating fewer nuts, "you have to somehow take into account that there is another cost that individuals might afford if they do not conform," said Sirianni.

Roy Baumeister, a social psychologist at the University of Queensland in Australia who was not involved in the study, noted that for humans, the need to belong is a fundamental motivation -- an idea he himself proposed in an influential 1995 paper. There's no question that humans will conform to harmful cultural practices for the sake of social acceptance, said Baumeister. The notion that nut-cracking chimpanzees act on similar motivations is, he said, "tempting."

"[The study] is cool and thought provoking," said Baumeister. "How much this is really about building a common way of doing things -- upholding the customs in the group for the sake of cultural solidarity -- and how much is just, like, oh, 'I guess that's how you do it,' isn't fully clear to me."

To the best of Sirianni's knowledge, this is the first example of maladaptive social learning in wild animals outside the lab. The discovery could put the kibosh on a dubious distinction that some researchers have ascribed to humanity, said Sirianni -- the idea that ours is the only species with detrimental cultural practices.