Droplets of water combine, and then jump from the insect's water-repellent wings. 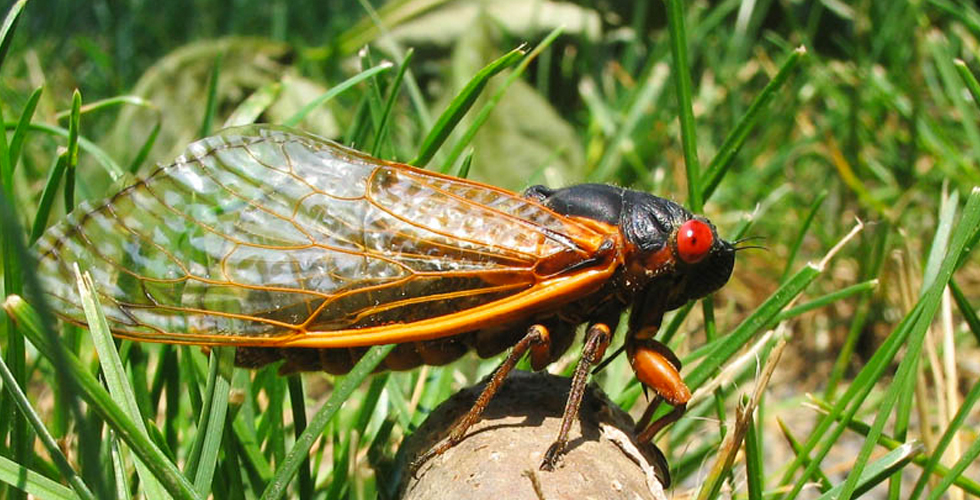 Scientists had known that cicada wings are super-water-repellent, or super-hydrophobic. This is different from a great many substances that are simply water-repellent, or hydrophobic — for instance, oil and water famously do not mix. But a number of surfaces such as lotus leaves can make themselves even more water-repellent by covering themselves with microscopic bumps, so water drops can float on top much as mystics can lie on beds of nails. For example, cicada wings are covered in rows of waxy cones about 200 nanometers or billionths of a meter high. In comparison, the average human hair is roughly 100 microns or millionths of a meter wide.
When it rains the super-hydrophobic nature of cicada wings can help them get clean — droplets rolling or splashing off them can remove soil, dust, pollen and microbes. But what if there is no rain, especially in the four to six weeks adult cicadas have to live above ground before dying?
Now scientists find rain is not necessary to keep cicada wings clean. Apparently, grime can simply leap right off them, given dew.
Mechanical engineer Chuan-Hua Chen at Duke University in Durham, N.C., and his colleagues were investigating a number of natural and artificial super-hydrophobic surfaces when they noticed drops of water at times rapidly disappeared. They were mystified by this behavior for years until they made observations from a different angle — they used a high-speed video camera to watch the droplets from the side of these materials instead of from above.
"That's when we saw them jumping upward," Chen recalled.
The scientists found that when these surfaces are exposed to water vapor, dew can condense on them. When growing droplets fused together, the merged drop then leapt off the super-water-repellant surfaces. These drops, each up to a few microns to a few hundred microns wide, can jump up to a few millimeters in the air.
"We've since found this happens on almost all normal super-hydrophobic surfaces," Chen said. "If you take a lotus leaf or any of the many other super-water-repellant surfaces out there and you let it cool in your freezer and then take it out, as humidity in the air condenses on it, you can see with your bare eyes that water drops will jump in the air."
When small water droplets combine on super-water-repellent surfaces, a single bigger drop results that has less surface area than its original parts. As such, energy that is no longer needed to flatten that water across the surface the smaller droplets once occupied gets released, popping the drop upward, Chen explained.
"These findings show that super-hydrophobic surfaces don't need water driven by gravity to take contaminants away — jumping droplets can do so," Chen said.
"This is a great piece of work that highlights a mechanism that has not been conventionally considered for self-cleaning," said mechanical engineer Evelyn Wang at the Massachusetts Institute of Technology, who did not take part in this research.
Chen and his colleagues found jumping droplets could remove glass, plastic or pollen particles up to 100 microns wide from cicada wings, including contaminants that could not be removed by wing vibration or wind flow.
"Mostly cicadas hang vertically on trees, which means once condensates jump, either gravity or the air will take them away," Chen said. "In the worst case scenario, the wing is held parallel to the ground, but even then, the droplets don't jump straight up, but always have some horizontal momentum. After they fall down, they leap back up again, and after a few jumps they leap away from the edge of the wing."
These findings not only can help explain the mystery of how cicada wings keep clean, but could also lead to improved artificial self-cleaning materials. Jumping droplets could also help remove heat from power plants, Chen said.
"I think this work is very exciting and shows the diverse possibilities and applications with the jumping droplet mechanism," Wang said.
Chen and his colleagues detailed their findings online April 29 in the journal Proceedings of the National Academy of Sciences.

Researchers Study Violinists To Learn How Humans Act in Synchrony
Alligators May Be Able to Survive Venomous Snake Bites
New Theory Says We’ve Been Wrong About How Bubbles Pop
Crustacean Genes May Solve Debate Over How Insects Evolved to Fly
Some Beetles Survive Being Eaten, New Study Finds
END_OF_DOCUMENT_TOKEN_TO_BE_REPLACED

COVID-19 Vaccine, Sharks and Mezcal
Crabs Use Belly Sounds To Communicate
Touring The Trinity Test Site
Protests, A Retracted Paper, and a Super-Earth Planet
Why Is an Empty Shampoo Bottle So Easy To Knock Over?
END_OF_DOCUMENT_TOKEN_TO_BE_REPLACED