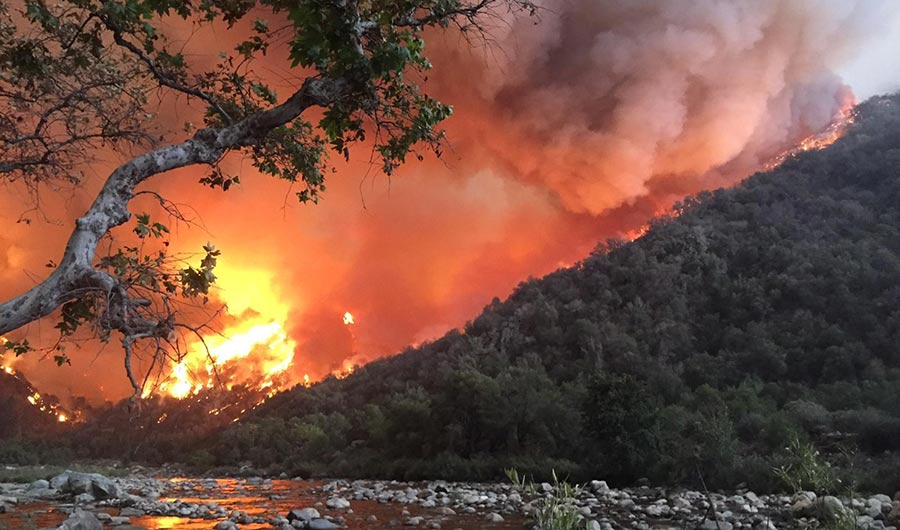 (Inside Science) -- California is getting hotter and drier -- and that means the nation's most populous state will likely continue to experience a larger number of deadly wildfires.

Although there are several factors that play into why the state’s wildfires have been getting more frequent and devastating, a new study, published this month in the journal Earth's Future, indicates that climate change is a big factor.

There's been a lot of debate among politicians, scientists and the public on the cause of increased wildfires, said lead author Park Williams, a bioclimatologist at Columbia University in New York. He and his team wanted to get to the root of the problem.

The researchers put together a dataset of almost 40,000 wildfires in California from the past half-century. They found that since 1972, the amount of land that typically burns in a year has increased by a factor of five, with 2017 and 2018 being the most devastating years.

California has a wide range of habitats and climates, so the scientists wanted to know when and where wildfires were mostly occurring. They compared their records of wildfires to records of California's climate in the past, and found that summer daytime temperatures correlated strongly with how much land burned in a given season. The effects were especially pronounced in forests, where the burned area was almost eight times the size of burned areas in 1972. The increase was caused mainly by fires on the northern coast -- the strip of coast that starts north of San Francisco -- and in the Sierra Nevada mountains.

The study “documents pretty carefully that there’s a strong relationship between summertime fire and temperature,” said Alex Hall, professor of climate science at the University of California, Los Angeles, who was not involved in the study.

The researchers found an even stronger correlation between the size of forested burned areas and the aridity of the atmosphere. “We saw that that relationship has been stable for the last 50 years,” said Williams. “That means that it's very unlikely that the increase in fire is actually due to something else.” The records showed that the atmosphere had become drier, most likely due to an average daytime temperature increase of 1.8 degrees Celsius (3.2 degrees Fahrenheit) in the warm season since the 1800s.

The researchers then compared their results to 31 climate models -- some of them modeling conditions from up to 120 years ago -- and found that the increases in temperature and aridity of the atmosphere were consistent with what climate models predict as a response to greenhouse gases. “That is the final link to allow us to conclude that human-caused warming is very likely the driver of the increase in summer forest fire area in California,” said Williams.

The logic behind aridity increasing forest fires is simple: As the soils and vegetation grow drier, fires are much easier to start and propagate. Lightning is how most fires start in the northern coast and the Sierra Nevada, but simple human activities can also ignite ravaging wildfires. For instance, the Mendocino Complex fire, the state's largest individual fire to date, which burned 464,500 acres last year, started when a rancher was hammering a stake into a wasp nest and the tools caused sparks that ignited the dry vegetation in his backyard.

For seasons other than summer, the study did not find such a strong link between aridity and wildfires, so the researchers think that other factors could be behind the fires. In the fall, for example, strong humidity-sucking winds from offshore can increase the intensity of coastal shrubland fires.

Rainfall patterns and climate cycles can also influence fire hazard. Hall’s research shows that California could be getting wetter in wet years and drier in drought years. That means that there could be a buildup of fuel during wet years, he says, and then an enhanced drying during dry years, which could lead to an increase in fires.

This year, more than 100 fire incidents have affected California so far, burning more than 37,000 acres. The state is kind of “a canary in the coal mine for global climate change,” said Williams.

The new study builds upon previous research by his group that estimated that human-caused climate change was responsible for half of burned forest area in the western U.S. from 1984 to 2015.

The problem has likely been exacerbated by past policies that suppressed natural fires, allowing excess fuel to build up, although the new study did not try to account for fire suppression in its analysis. Prescribed fires could “relieve” the land so that wildfires don't become so large and intense, according to the researchers. Although prescribed burns also release unhealthy smoke, “it's still better in the long run than the big out-of-control fires,” said Williams.

But forest management strategies alone are not going to solve all the problems, he said. The new study’s estimates suggest that wildfire activity will increase exponentially in the near future as temperatures continue to rise. “We need to see the writing on the wall,” said Williams. “In California, continued increases in fire are inevitable and we need to be ready for it.”