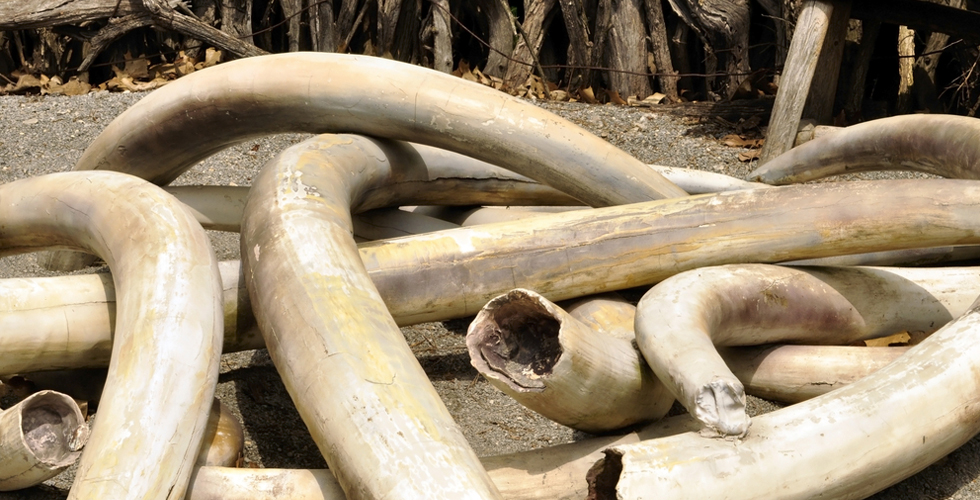 (ISNS) -- Radioactive carbon atoms created during 20th-century nuclear bomb tests could help save elephants and other endangered species.
A new study, published in this week's issue of the journal of the Proceedings of the National Academy of Sciences, shows that carbon-14, a radioactive version of the common carbon atom, can be used to determine when an animal died to within about one year.
"We're not the first to try this, but I think we've done the most thorough proof of concept," said the study’s first author Kevin Uno, a geochemist at Columbia University's Lamont-Doherty Observatory.
The dating technique could help wildlife investigators for the first time to reliably determine if ivory was obtained legally by indicating whether it was acquired after a 1989 international ban on trade in ivory.
"You can sometimes guess that ivory is old by examining it, but I think this is a much more accurate and precise method for doing that," said biologist Alfred Roca of the University of Illinois, who was not involved in the research.
Nuclear bomb testing
Carbon-14 is produced naturally by cosmic rays interacting with atoms in the Earth's atmosphere. But in the 1950s and 1960s, the United States and the former Soviet Union conducted hundreds of aboveground nuclear bomb tests that nearly doubled the concentration of carbon-14 in the atmosphere.
The aboveground explosions were banned in 1963, and since then the concentration of carbon-14 has been steadily declining as natural processes remove it from the atmosphere. One way that this happens is that plants and animals in the food chain absorb the carbon atoms, explained study coauthor Thure Cerling, a geochemist at the University of Utah.
"It gets into plants during photosynthesis and is made into plant sugars and starches," Cerling said. "And then an animal comes along and eats the plant and makes it into hair or muscle or eyeballs, and it gets incorporated into those tissues."
An atomic time marker
Scientists figured out long ago that by measuring the concentration of carbon-14 in tissue and comparing it to recorded levels of atmospheric carbon-14, they could determine when that tissue formed.
While this was known to be possible in theory, no one had tested how precise the method could be until now. In their new study, Uno and his team tested the radiocarbon dating technique on the tusks of two elephants that died in 2006 and 2008, as well as elephant and hippo teeth, monkey hair and oryx horn.
The researchers showed that under ideal conditions, the dating technique could pinpoint the date of death to within about one year for most tissues. The method worked best for tissue formed between 1955 and about 2000. The margin of error for the most recent years will increase as the carbon-14 concentration returns to their natural background levels. The researchers also found that some tissues were more easily dated than others.
"It doesn't really work well on pelts or bone, because those tissues continue to incorporate carbon over time," Uno explained.
"What you really want is tissue that locks in the carbon as it grows and is never touched again. That's why hair and horn and teeth and tusks are such good targets – which just so happens to be what people buy."
For example, elephant tusks grow ring by ring, with the youngest material on the inside.
Thus, by dating that interior portion of a tusk, scientists can tell when an elephant died.
Currently, the radiocarbon test costs about $500 and takes about one month to complete. Uno estimates the technique should work for dating new tissue for the next 15 years or so, by which time carbon-14 is expected to drop to natural levels. In addition to helping combat poaching, Cerling and Uno are also using the radiocarbon dating technique to investigate the growth rate of animals.
"Now that we can determine growth rates in teeth, we can use them as a tape recorder of sorts," Uno said. "And if we can get multiple samples, then we basically have a time series of what the animal was eating by adding data from stable carbon isotopes."
Potential uses
Samuel Wasser, a conservation biologist at the University of Washington, who did not participate in the study, said the new study is a "very important development" and comes at a crucial time for elephants, which are being slaughtered at a rate that could drive them to extinction this century.
Wasser envisioned the carbon-14 dating technique being useful in a variety of ways. For example, if used in combination with other methods that use DNA to determine the geographical origin of an ivory sample, the carbon-14 dating technique could help investigators determine how recently hotspots for elephant poaching have been active.
"Also, if the ivory in a large seizure included samples of multiple ages, it might suggest that the ivory was obtained from government stockpiles and illegally smuggled into the trade," Wasser said.
"That too is important to know given the sizes of government stockpiles around the world and the incentives to illegally profit from them."
Lastly, it could be used to test the legality of ivory sold over the Internet and in shops around the world, and shut down vendors selling illegal ivory.

Why Training with Heavier or Lighter Baseballs Could Help Pitchers Throw Faster
Fossil Bite Marks Show Some Dinosaurs Ate Their Own
Royal Jelly Does Not A Queen Make
What Does the Spiny Lobster Sound Like? Loud.
Tyrannosaurs' Long Legs May Have Been for Marathons, Not Sprints
END_OF_DOCUMENT_TOKEN_TO_BE_REPLACED