The unprecedented pace of scientific progress on Covid-19 builds on groundbreaking discoveries from the past.
Image 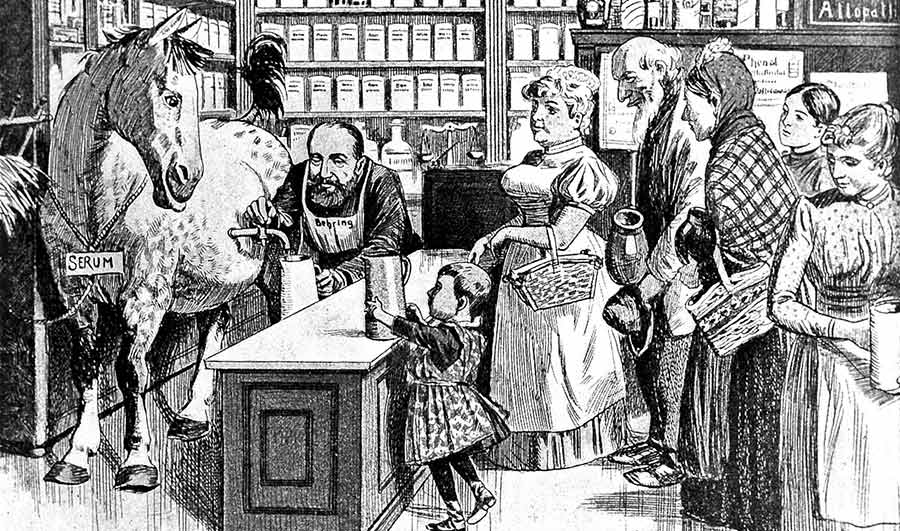 (Inside Science) -- Today's Covid-19 researchers didn't start from scratch. Their rapid progress in understanding a disease that was unknown one year ago rests on over a century's worth of discoveries about viruses and the immune system.

Next week, scientists in Sweden will announce new Nobel Prize winners in physiology or medicine. This year's winners will join an inspirational group whose work continues to shape science and society. Here's how some of those past Nobel-winning discoveries are contributing to the fight against the current pandemic.

Emil von Behring won the very first Nobel Prize in physiology or medicine in 1901 for his work on diphtheria, which killed so many children in the 19th century that it was called the "strangling angel of children." Through a series of experiments on animals such as guinea pigs, von Behring found that individuals that had recovered from diphtheria held a miraculous cure in their blood. When he processed the blood to remove larger components like cells, the resulting serum could prevent other animals from contracting the disease and even cure ones that had been exposed to diphtheria toxin.

Von Behring and his colleagues developed anti-diphtheria serum into a medicine that could be produced in large quantities in horses and used to save children's lives. His key collaborator Paul Ehrlich standardized the serum to ensure each dose had the same potency. Ehrlich also developed theoretical explanations for how it all worked. While Ehrlich was wrong about certain details, he correctly laid out the core of antibody-mediated immunity: Infection prompts cells to release defensive substances, or antibodies, which can destroy the particular pathogen or toxin that spurred their production.

"He made a science of it," said Arthur Silverstein, a retired immunologist who is now affiliated with the Department of the History of Medicine at Johns Hopkins University in Baltimore. "He really defined in better scientific terms what an antibody was and where it came from and how it worked." Ehrlich was awarded the Nobel Prize in physiology or medicine in 1908. 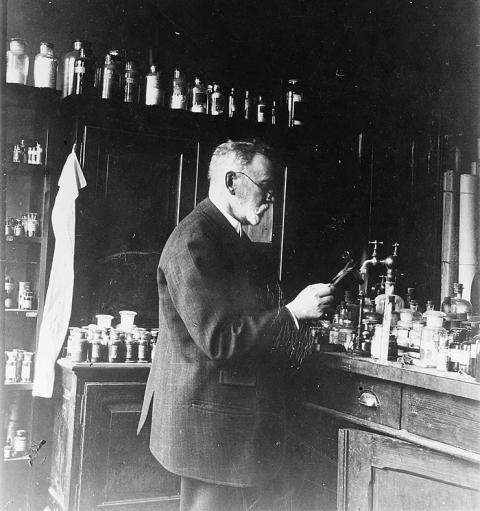 Paul Ehrlich working in his laboratory.

"The logic is, 'that person recovered. They've got antibodies in them. I'm going to go get them,'" said Timothy Block, president and CEO of the Hepatitis B Foundation and its Baruch S. Blumberg Institute, a nonprofit medical research organization.

While diphtheria antitoxin was highly effective, the evidence that convalescent plasma helps against Covid-19 is mixed. Block believes it likely helps a subset of patients at certain disease stages, but it's not yet clear how to predict who will benefit from it. That's because Covid-19 is more complicated than diphtheria.

Diphtheria is caused by a bacterium called Corynebacterium diphtheriae, and its harmful effects can be traced to a single toxin easily neutralized by antibodies. Covid-19 is caused by the virus SARS-CoV-2, which takes over human cells and wreaks havoc through multiple mechanisms that researchers are still struggling to understand.

After developing diphtheria antitoxin, von Behring invented a vaccine by mixing diphtheria toxin and antitoxin together. The antitoxin neutralized the toxin and rendered it safe, and people's immune systems responded to the deactivated toxin by producing their own antibodies.

Von Behring's mixture wasn't the first vaccine ever developed -- the smallpox vaccine had already been around for more than a century. But at that time, no one knew how the smallpox vaccine worked. Von Behring's approach was "the start of rational vaccine design," said Stefan Kaufmann, an immunologist and infection biologist and founding director of the Max Planck Institute for Infection Biology in Germany. Prompting patients' bodies to produce antibodies is still a primary goal of vaccine developers today, including those working on vaccines for Covid-19.

Antibodies are also valuable as detection tools. A single type of antibody will only bind to a specific chemical target, and scientists can design antibodies to target almost any biological substance they want to study. Researchers use antibodies for everything from staining parts of cells on microscope slides to testing for diseases. Indeed, some Covid-19 screening tests use antibodies to detect whether a person has SARS-CoV-2 viral particles in their body.

But many tests and experiments require pure samples containing only one type of antibody. A person's blood contains thousands of types of antibodies. Even a single disease can prompt the body to produce many types of antibodies, as each recognizes a different part of the disease-causing organism or its products.

César Milstein and Georges Köhler solved this problem in 1975. By that time, scientists knew that antibodies are produced by specialized cells called B cells, and each B cell makes only one type of antibody. But B cells don't survive long outside the body. To make antibody-producing cell cultures that could be grown in the lab and kept alive indefinitely, Köhler and Milstein fused B cells with cancer cells. The resulting "hybridomas" each produced a single type of antibody, or "monoclonal antibody." The advance won them the Nobel Prize in physiology or medicine in 1984.

"It has totally revolutionized biology," said Pamela Björkman, a structural immunologist at the California Institute of Technology in Pasadena. "We use monoclonal antibodies -- we and everyone else these days." (There are now several ways of making monoclonal antibodies, although the Köhler and Milstein method is still widely used.)

Many new drugs are actually monoclonal antibodies. For example, the anti-arthritis drug Tocilizumab is a monoclonal antibody that reduces inflammation by suppressing parts of the immune system. Some of the worst damage in Covid-19 is caused by out-of-control immune reactions called cytokine storms, and researchers are investigating whether Tocilizumab can halt these destructive spirals.

Researchers are also developing monoclonal antibodies that attack SARS-CoV-2 itself. Björkman's team is working to characterize antibodies from convalescent plasma, hoping to identify promising candidates to synthesize as drugs. Multiple drugs identified that way, such as REGN-COV2 and LY-CoV-555, are already in clinical trials. According to Björkman, the most effective antibody treatments will likely combine several types of monoclonal antibodies that attack the virus in different ways.

While antibodies are hugely important, they can only kill viruses that are floating free in the blood. Once a virus has entered a human cell, it becomes invisible to antibodies -- but not to killer T cells.

Viruses take over the cells they infect, forcing them to churn out more viruses. Killer T cells attack these virus-infected cells. Like antibodies, killer T cells come in many varieties, each of which has its own specific target.

"The killer T cells are there to bump off damaged cells," said Peter Doherty, an immunologist at the University of Melbourne's Doherty Institute in Australia. "They stop virus production -- kill the virus production factories." 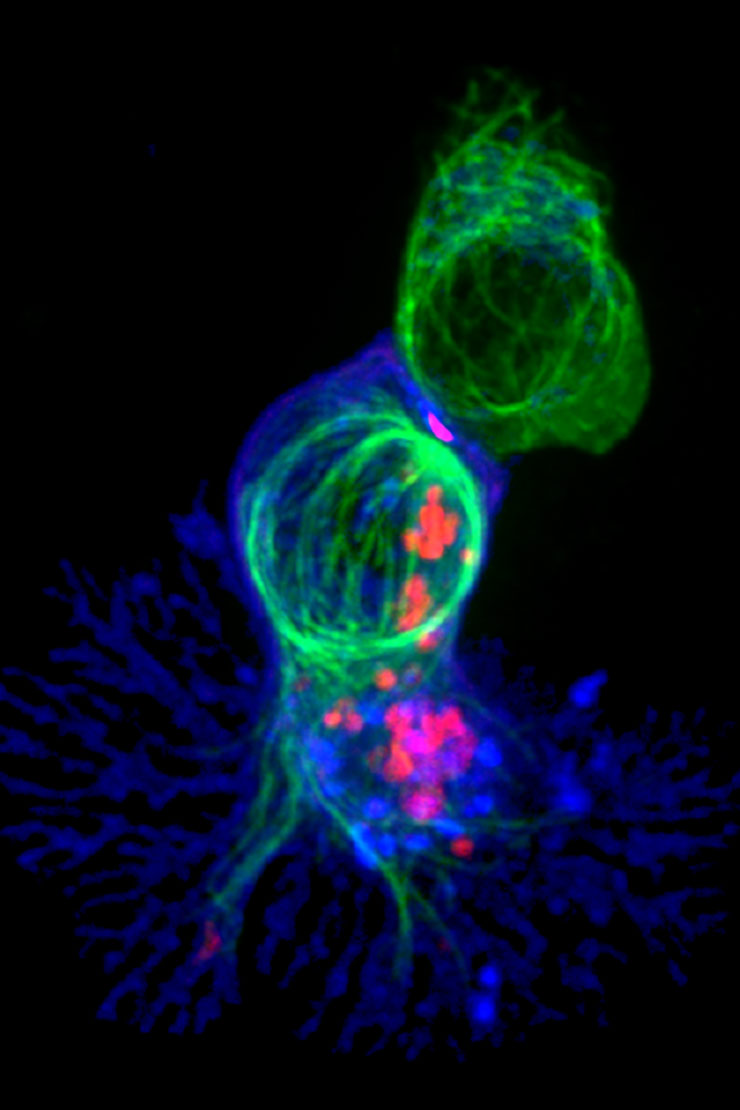 A microscope image showing a killer T cell (blue) attacking another cell. The cells are stained with fluorescent dyes that are bound to the cellular material using monoclonal antibodies.

By the early 1970s, researchers knew that killer T cells could destroy virus-infected cells. But they assumed T cells recognized infected cells in much the same way antibodies recognize viruses, perhaps by detecting newly produced viruses as they budded out from infected cells, said Doherty.

With colleagues including Rolf Zinkernagel, Doherty discovered that killer T cells rely on a group of molecules called MHC class 1 proteins that stick out from the surfaces of cells. Killer T cells bind to these MHC proteins and use them to assess whether a cell is a healthy part of a person's own body.

When a virus infects a cell, it alters the MHC proteins on that cell's surface. These altered MHC proteins then serve as cries for help, telling killer T cells that the cell has gone rogue and should be destroyed. This discovery explained why transplanted organs are often rejected, since killer T cells may perceive MHC proteins from another individual as "altered" or "foreign." Later work revealed that there is a second group of T cells, now known as helper T cells, that regulate the immune system rather than attacking infected cells.

Doherty and Zinkernagel won a Nobel Prize for their work on MHC proteins and T cells, also called T lymphocytes, in 1996. Now, that knowledge is part of the fight against Covid-19.

"It is important to have good antibodies. But I doubt that they will be sufficient," said Kaufmann. "Ultimately, to combat a disease like Covid-19, you also need T lymphocytes."

Most vaccine developers still focus primarily on antibodies, according to Doherty. T cell responses take a few days to ramp up, whereas antibodies have the potential to destroy invading viruses quickly, preventing infection from ever taking place.

But respiratory viruses make challenging vaccine targets because it's hard to keep antibody levels high enough in the mucus that bathes the cells inside the nose, said Doherty. That's part of why flu vaccines are only about 40-60% effective at preventing illness. Researchers believe SARS-CoV-2 also starts out by infecting nasal tissues, so Doherty fears it could present some of the same problems.

If a Covid-19 vaccine were to stimulate a strong T cell response, it wouldn't prevent infection, but it could help people clear the infection quickly, with less severe symptoms.

There is no telling which of the many Covid-19 vaccine candidates will end up being most effective, said Doherty. But he thinks it’s likely that the Moderna and Pfizer candidates, which use messenger RNA, will get especially good T cell responses.

There are many more Nobel-winning scientists whose work is important to Covid-19 research, and even more whose contributions were never honored with Nobels. Ultimately, they were all part of the same vast team, advancing human knowledge and empowering today's scientists to tackle the present threat.