Curiosity Makes Grand Entrance on Red Planet, and Our Own

Curiosity Makes Grand Entrance on Red Planet, and Our Own 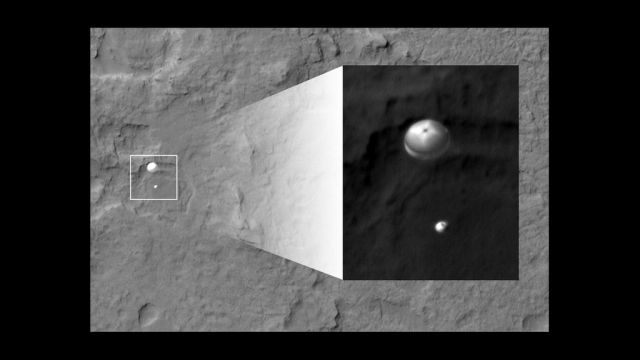 (Inside Science) -- Following NASA's Mars Science Laboratory mission as it landed on the Red Planet and successfully deposited the Curiosity rover early this morning U.S. Eastern time revealed a cascade of dramatic events, both on Mars and on Earth.  The seven minutes of terror passed without incident in a perfectly choreographed descent. “I’m safely on the surface of Mars,” announced the Curiosity Rover’s twitter handle, “GALE CRATER I AM IN YOU!!!!” as Curiosity began its mission of studying the climate and geology of a carefully chosen location on Mars to see if the planet had the conditions to support life.  Photographs came almost immediately as the rover created an uplink with the eleven-year-old satellite Odyssey, not having to wait until it swung back around to the landing site.

An unofficial computer screen grab apparently from the NASA Jet Propulsion Laboratory center in Pasadena, California was put up before the official picture loaded on to the NASA website. By this time, several NASA websites had crashed and revelers on Times Square were, according to at least one tweeter, chanting, “NASA-NASA-NASA” and “Science-science-science” after watching coverage on a giant Toshiba screen in the wee hours of Monday morning.

Two hours later, the rover sent a higher-resolution image taken from “fisheye” wide-angle lens on its left rear side taken from the Hazard Avoidance Camera. As Sol 0 (the first day on Mars) continues for the rover on the Red Planet, there are plenty of visuals ahead.

The next set of images is expected to come from MARDI, the Mars Descent Imager fixed on the rover, images taken at five frames per second. The first ones to download will be grainy but 1,600 x 1,200 pixel color images would follow. Even if James Cameron’s 3D camera did not finally make it to Mars, these should be fairly cinematic.

As the super-ambidextrous, Wall-E-like rover joins its older brothers Spirit and Opportunity, NASA aims to complete about eight years of “continuous roving” on the Red Planet. NASA said Curiosity is expected to have a life of two years but no one will be surprised if it lasts double that time. Wear and tear from Mars’ changing temperature rather than battery life is the chief concern.

But Curiosity may already have done some work in paving the way for human exploration of Mars. Ionizing radiation is probably the key hazard preventing a manned mission to the Red Planet. An instrument called the Radiation Assessment Detector was activated in December, measuring radiation levels even while the car-sized rover was snug in the spacecraft. It would give an idea of how radiation would affect humans on the journey and soon, on human shielding requirements on Mars.

Of course, one of the most exciting things the rover will do is use its lasers to vaporize Martian rock and figure out its composition. While the rover itself moves painfully slow a fraction of a mile an hour, the LIBS instrument on the ChemCam can target rock within 7 meters of the Rover, perform readings on its chemical composition, and analyze rock composition within six minutes.

With the first flyby of Mars in the 1960s, and the prospect of a decade of almost continuous data from its surface, the Red Planet seems all too familiar now. NASA seems to have mastered the engineering capability for landing on Mars but its fuller exploration may have just begun.

And this Mars mission may have already affected the actions of other nations here on Earth. On Friday, the Indian cabinet cleared a plan for an orbiting Mars satellite with a late 2013 launch.

Severe Marine Heat Waves Linked to Human-Caused Warming
Infographic: How a Geiger Counter Works
Tumors Under Physical Stress Inside the Body May Not Respond as Well to Chemotherapy
This Long-Tailed Bird Makes Sounds With Its Feathers in Different Accents
Jeweled Orb-Web Spiders Mimic Flowers to Catch Pollinating Insects
END_OF_DOCUMENT_TOKEN_TO_BE_REPLACED