Some scientists have been poking at the foundations of dark energy, but many say the concept remains on solid, if mysterious, ground.
Image 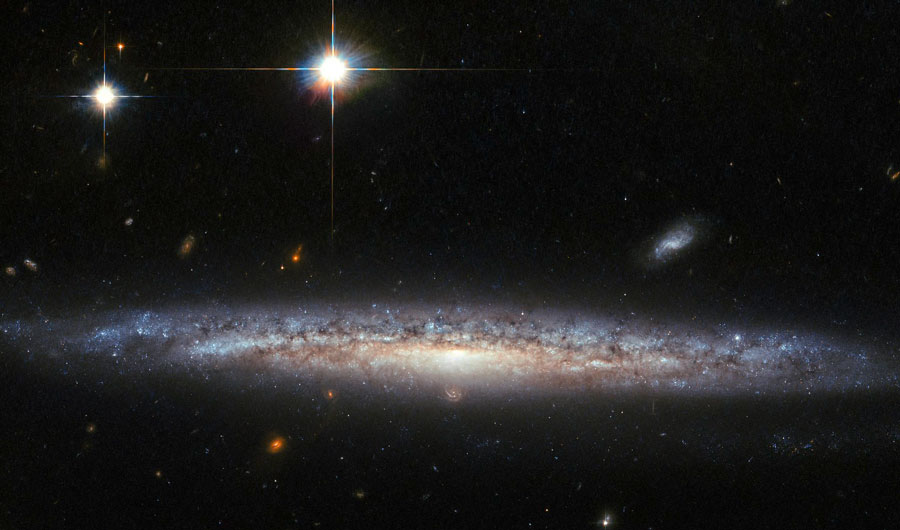 (Inside Science) -- Since the dawn of the universe, the biggest stars have ended their lives with a bang, blowing out their outer layers in bright, fiery bursts that can be seen many light-years away. Astronomers use these supernova explosions like marks on an expanding balloon to measure how fast the universe is growing.

Based on studies of dozens of supernova explosions, astronomers in the late 1990s realized that the universe's expansion seems to be accelerating. They hypothesized that some unseen "energy," which works the opposite of gravity, was pushing everything outward. The concept of so-called dark energy quickly became popular, and ultimately, scientists' consensus view. It earned three physicists the 2011 Nobel Prize.

Recently, however, some scientists have been poking at this foundation of dark energy research.

A team of Korean scientists published findings on Jan. 5 questioning the reliability of using supernovae to measure intergalactic distances. This followed a paper published in November that also cast doubt on the supernova evidence from a different angle, arguing that our galactic neighborhood is flowing in a particular direction, affecting certain kinds of distance measurements.

In both instances, other scientists pushed back, noting potential flaws in the methodology and conclusions of the new studies.

While most scientists still seem to believe that dark energy remains on solid ground, no one yet has any firm idea what it actually is.

How standard are "standard candles"?

Every time a star goes supernova, its radiant explosion follows such a familiar pattern that scientists nicknamed them "standard candles." Assuming supernovae are predictable that way, astronomers can estimate how far away they are mainly based on how bright they appear. They can then map the universe's expansion history by studying supernova both nearby and far away -- that is, both recent and from a long time ago.

It's like gauging how far away vehicles are at night by looking at their headlights. If you made incorrect assumptions about what kinds of vehicles they are -- for example assuming they are trucks with bright lights a long distance away when they are in fact smaller vehicles much closer -- then your data and your inferences about the length of the road would be skewed.

Young-Wook Lee, an astronomer at Yonsei University in South Korea and lead author of the Jan. 5 study, and his colleagues question a common and important assumption in the standard candle approach: that the brightness or luminosity of supernova explosions don't vary when you look further back into the universe's past.

To test their hypothesis, they studied supernova in galaxies whose stars' ages had been precisely measured and found that the brightness of a supernova depends on the ages of its host galaxy's stellar population. The stars that produce supernovae are generally younger, further in the universe's past, which is problematic for physicists estimating the universe's expansion rate.

"Supernova luminosity should vary as a function of cosmic time, and that hasn't been accounted for in the so-called 'discovery' of dark energy," said Lee.

But to Dragan Huterer, an astrophysicist at the University of Michigan in Ann Arbor, the data from the paper doesn't warrant a sweeping reconsideration of dark energy.

"These evolution effects have not been observed to be strong, and cosmologists partly take them into account," Huterer argued. He conceded there may be a small correlation, but not one large enough to shake the foundation of dark energy's consensus. "I'd bet my life on it," he said.

Joshua Frieman, a Fermilab astrophysicist, thinks Lee and his team are doing legitimate research, but is also skeptical about whether one could draw sweeping conclusions from it. He points out that the study's findings show only a weak trend with age; they use a model that estimates ages of a few supernova older than the universe's age; and they focus only on a small sample of elliptical galaxies, while the scope of supernova studies that support dark energy include all kinds of galaxies.

While many scientists argue against overinterpreting results that seem to question the foundations of dark energy, both of the recent papers fall into accepted lines of research. Supernova cosmology has for years been plagued by questions about systematic uncertainties infecting every step of calculations, including how their fluxes and light curves are measured and calibrated. Researchers need to account for every factor, no matter how small, that could muddy a study of the expanding universe. And there's always a concern for something missed, an unknown unknown.

Such concerns are actually evidence of a well-developed field, argued Tamara Davis, an astrophysicist at the University of Queensland in Australia. "Once a field becomes very mature, the tiny details that were negligible before become more important," said Davis. A focus on myriad uncertainties that affect a measurement by just a percent or two is actually a sign that the measurement's quite good already, she argued.

Astronomers' current controversy over the precise value of the Hubble constant, which describes how fast the universe is expanding, reflects a similarly mature field, she said. (This question about the exact expansion rate is different than the one about whether the rate's accelerating.) That research, similar to supernova cosmology, has made great strides since the 1990s, and now small, previously ignored discrepancies come to the fore.

Most scientists Inside Science interviewed feel dark energy is still on solid ground. Even if Lee's study and others like it discredited the kinds of supernova cosmology findings that formed the groundwork for dark energy research, other kinds of research now also point toward dark energy, Frieman argued. This includes studies of fluctuations in the cosmic microwave background radiation -- radiation that's thought to be left over from soon after the Big Bang and which bears an imprint of the growing universe when it was young -- and studies of the large-scale structure of the universe, involving surveys of hundreds of thousands of galaxies over a wide area.

"Yes, in 1998, you could've said, 'There are supernova systematic uncertainties, so maybe the universe isn't accelerating,'" Frieman said. "But in 2020, we now have multiple pieces of evidence that the stool holding up dark energy is much more stable, so you could knock out supernova and still say we have strong evidence for cosmic acceleration from these other probes."

Current and upcoming experiments could add yet more precision to studies of dark energy. These include the Dark Energy Survey, the Dark Energy Spectroscopic Instrument, space-based missions, and the newly renamed Vera Rubin Observatory, being built in northern Chile. But theoretical physicists are behind, Huterer said, as they still don't have a compelling explanation for what dark energy is and where it came from.

"I think the precision on dark energy parameters is definitely going to be improving with these missions," Frieman said. The data so far is consistent with the idea of dark energy as a simple cosmological constant, a ubiquitous vacuum energy somehow produced by the universe's expansion that generates yet more expansion. But Frieman hopes new data may reveal something more exotic, such as a mysterious substance called quintessence, which some scientists have proposed could explain the accelerating expansion of the universe. Which theory will be ahead 10 years from now "is anyone's guess," Freiman said.