Evidence left over after the Big Bang may suggest a saddle-shaped universe.
Image 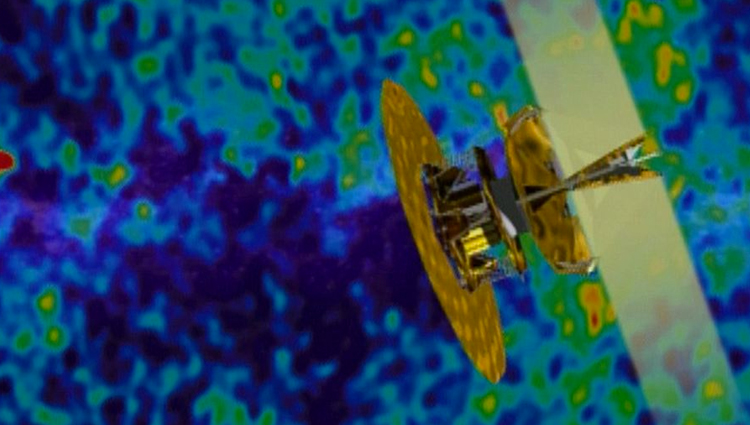 A picture of the Wilkinson Microwave Anisotropy Probe superimposed over a visualization of cosmic microwave background radiation.

(ISNS) -- The shape of the universe may be dramatically different than before thought, a group of researchers now says.

Researchers investigating a major anomaly in the afterglow of the Big Bang suggest the fabric of space and time may actually be curved like a saddle, possibly upending the currently leading notion that light and anything else traveling through spacetime zips through a "flat" universe in straight lines. In a saddle-shaped universe, however, any object that seems like it is traveling parallel to another item will actually veer away from it after vast distances.

However, there may be other explanations for this anomaly, scientists cautioned. Our universe may have collided with another universe shortly after the Big Bang, or the anomaly might just be a statistical fluke.

Data from NASA's Wilkinson Microwave Anisotropy Probe (WMAP), launched in 2001, unexpectedly suggested that the universe may be lopsided — hot and cold spots on one side of the cosmos appear hotter and colder than on the other. The evidence for this anomaly has increased over time, and data from the Planck satellite launched by the European Space Agency in 2009 supports the existence of the same anomaly.

"The observed anomalies in the cosmic microwave background are intriguing — they may just be a statistical fluke, but they might be an indication of new physical processes at play in the early universe," said researcher Andrew Liddle, a cosmologist at the University of Edinburgh in Scotland.

This lopsidedness contradicts the prevailing view in cosmology that moments after the Big Bang, the universe grew titanically in size. This growth spurt, called inflation, would have evened out the cosmos and made it look mostly similar in every direction.

Now cosmologists suggest these anomalies occur because the universe is not flat. Instead, these researchers propose the universe may be ever so slightly "open," curved in such a way that parallel lines, which never converge or diverge when traveling on a flat surface, will eventually diverge from one another, like on a saddle.

"The light rays in a curved universe appear to follow curved paths," Liddle said. "They are following lines that are the shortest distance in curved space, just as airplanes follow great circles when flying around the Earth."

The idea starts with the observable universe forming like a bubble inside a larger "meta-universe." The act of birth may have triggered fluctuations in the wall of the bubble that would imprint themselves as very large-scale disturbances. One consequence would be this asymmetry in the cosmic microwave background that WMAP and Planck see; another is a universe that looks flat but is actually curved beyond the observable horizon of the universe.

"The amount of inflation that takes place inside the bubble determines how flat the universe is," Liddle said. "We want there to be enough that it is almost, but not quite, flat."

This concept "is an extremely intriguing one, particularly as it suggests that there may be other interesting new physics just around the corner," said theoretical physicist Marc Kamionkowski at Johns Hopkins University in Baltimore, who did not take part in this research. "While still quite speculative, this open universe scenario does seem to provide a more natural way to explain why the distance scale of the asymmetry is so close to the horizon scale today than other scenarios I've seen."

Matthew Kleban, a theoretical physicist at New York University, who also did not participate in this study, said that improving the understanding of the curvature of the universe is very important. "With that said, this certainly doesn't constitute direct evidence, but it's tantalizing," said Kleban.

This concept faces competition from a number of other explanations scientists have bandied about to explain this anomaly. For instance, another universe may have collided with ours, suggest Kleban and his colleagues.

However, all these explanations for this seeming anomaly in the cosmic microwave background that demand a rewrite of the laws of physics may ultimately be moot.

"The majority of cosmologists probably believe that the observed anomalies are a statistical fluke rather than a real property of the universe, which is an entirely reasonable point of view," Liddle said.

In 2014, the Planck team could reveal whether the anomaly is indeed a fluke when it releases more data on the cosmic microwave background. The idea of a saddle-shaped universe may be supported if the distribution of temperatures in the sky does not follow a bell curve.

Liddle and his colleague Marina Cortês detail their findings in the Sept. 13 issue of the journal Physical Review Letters.