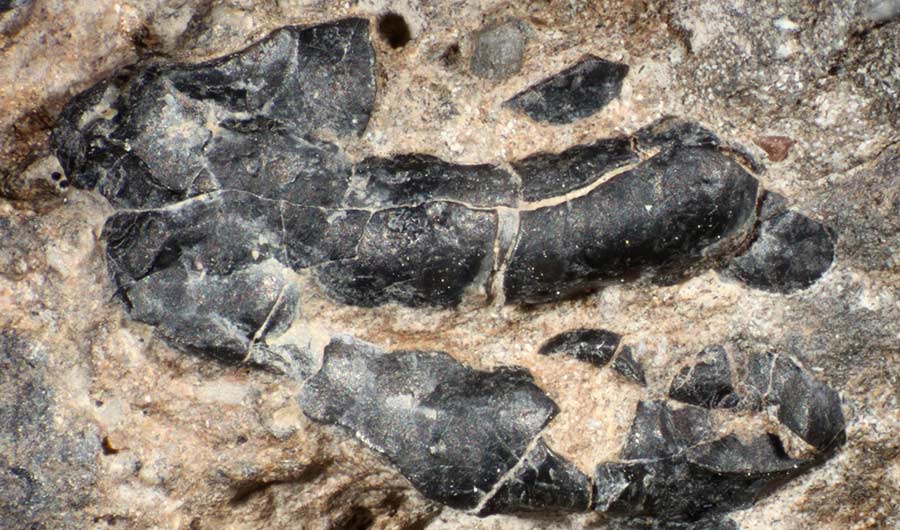 (Inside Science) -- To dinosaur researchers, flat, grinding teeth are like neon signs that spell "plant-eater." But the other end of the dinosaur tells a more complex story, according to new research. Fossilized feces from Utah's Grand Staircase-Escalante National Monument suggests that duck-billed dinosaurs got some extra nutrition from large crustaceans living in rotten wood.

The fossilized feces, known as coprolites, came from more than 15 separate sites, some of which were apparently "latrines" where dinosaurs pooped repeatedly. All were located in the Kaiparowitz formation, a thick swath of fossil-rich rock laid down around 75 million years ago in what is now southern Utah.

The area is currently protected as part of Grand Staircase-Escalante National Monument, although its future is uncertain due to an ongoing review of national monuments ordered by President Donald Trump. This past Sunday, the Washington Post reported that Interior Secretary Ryan Zinke has recommended reducing the size of Grand Staircase and several other monuments, as well as reopening them to uses such as grazing, logging and coal mining.

The specific recommendations are not yet public, so it's still unclear what impact they would have on the regions that contain fossils. Nevertheless, several researchers interviewed for this article expressed concern over the potential loss of the land's protection. Grand Staircase-Escalante is famous for its exceptionally diverse suite of dinosaur fossils.

In the current study, when the researchers cut thin slices from the coprolites and examined them using microscopes and other instruments, they saw the remains of wood from conifer trees. The wood had been partially broken down by fungus prior to being eaten, which would have made it easier for the dinosaurs to digest.

The researchers can't know for sure what kind of dinosaurs made the coprolites. However, the fossils closely resemble another group of wood-filled coprolites from Montana, which are thought to be the leavings of elephant-sized, duck-billed dinosaurs known as hadrosaurs. Several kinds of hadrosaurs lived in Grand Staircase-Escalante, and the teeth of some species would have been well-suited to grinding up tough plant material like rotten wood, according to Karen Chin, a paleontologist at the University of Colorado Boulder and first author of the paper published today in Scientific Reports.

Greg Erickson, a paleobiologist at Florida State University in Tallahassee who has studied hadrosaur teeth, agrees that the coprolites most likely came from hadrosaurs -- in particular, a genus called Gryposaurus. These dinosaurs had hundreds of teeth arranged in rows that were continually worn down and replaced, enabling them to pulverize almost any kind of plant matter, he said. Erickson has worked with Chin in the past, but was not involved in the new study.

The discovery of similar rotten-wood coprolites from multiple locations suggests that hadrosaurs ate rotten wood routinely, said Chin. This is surprising, since most of today's large herbivores rarely eat wood. Cows in Chile have been seen eating rotten logs, but for the most part, today's mega-herbivores rely on more tender plant material like grass and leaves, she said.

Even the hadrosaurs probably ate other types of plant matter most of the time, said Chin. It's no surprise that researchers rarely find remains of more delicate meals, since wood is tougher than other plant tissues and more likely to fossilize, even after passing through an animal's digestive tract, she added. The hadrosaurs might have turned to rotten wood at certain times of year, perhaps when other food became scarce, she said.

In addition to rotten wood, the Utah coprolites contained another surprise: pieces of crushed shell about a millimeter thick. The shells' distinctive layered structures marked them as the exoskeletons of crustaceans, a group of invertebrates that includes crabs and lobsters.

Until now, paleontologists have generally assumed that hadrosaurs and other large herbivorous dinosaurs were strict plant-eaters, like modern-day elephants and rhinos, said Chin. But the crustaceans in their waste demonstrate that at least some of them were ingesting meat, and Chin doubts they were doing so completely by accident. The crustaceans in the coprolites would have been about 2 inches long, big enough for a 30-foot-long hadrosaur to spit out if it accidentally scooped one up with a mouthful of rotten wood.

"That animal would know it was eating something other than plant material. And it would have a choice to make," she said.

Why did hadrosaurs supplement their diets with meat, while similar-sized herbivores today do not? Chin speculates that it might have something to do with their reproductive strategy, laying eggs instead of giving birth to live young. When a female hadrosaur produced a clutch of eggs, she might have benefited from the sudden boost of protein and minerals crustaceans could provide.

This sounds plausible to Eric Roberts, a sedimentologist at James Cook University in Townsville, Australia, who has also studied coprolites from southern Utah and was not involved in the study. And while the dinosaurs' motivations remain a matter of speculation, their droppings clearly indicate that they did, in fact, eat meat -- a behavior researchers could never have guessed from their bones and teeth alone.

"When you find evidence like this, it does require that you sort of expand your ideas about how things as large as ceratopsians and hadrosaurs may have obtained enough nutrition," said Roberts. "It opens up the way that I think about dinosaur ecology."

Researchers Study Violinists To Learn How Humans Act in Synchrony
Alligators May Be Able to Survive Venomous Snake Bites
New Theory Says We’ve Been Wrong About How Bubbles Pop
Crustacean Genes May Solve Debate Over How Insects Evolved to Fly
Some Beetles Survive Being Eaten, New Study Finds
END_OF_DOCUMENT_TOKEN_TO_BE_REPLACED

COVID-19 Vaccine, Sharks and Mezcal
Crabs Use Belly Sounds To Communicate
Touring The Trinity Test Site
Protests, A Retracted Paper, and a Super-Earth Planet
Why Is an Empty Shampoo Bottle So Easy To Knock Over?
END_OF_DOCUMENT_TOKEN_TO_BE_REPLACED