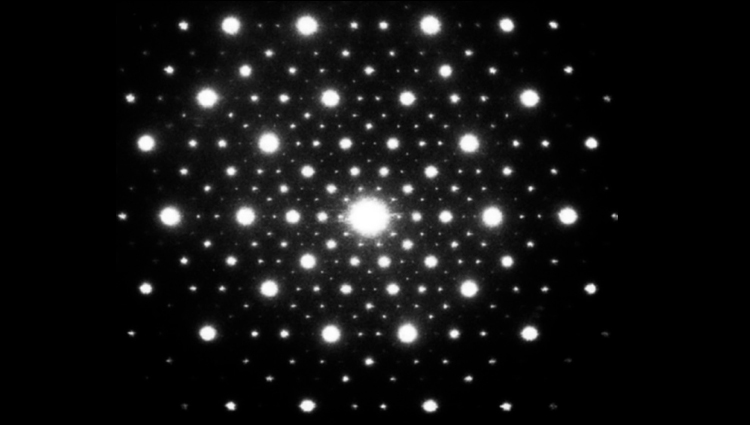 (Inside Science) -- The 2011 Nobel Prize in chemistry has been awarded to an Israeli scientist for discovering a previously unknown, irregular pattern of atoms in molecules.

The prize will be given to Daniel Shechtman of the Israel Institute of Technology in Haifa "for the discovery of quasicrystals." The discovery can be dated to April 8, 1982, when images from Shechtman's electron microscope indicated atoms packed together in an unfamiliar and unexpected pattern that never repeated itself.

Shechtman reacted incredulously to the discovery, jotting question marks in his notebook and telling himself there could be no such creature. He had taken a molten mixture of aluminum and manganese and chilled it rapidly. When Shechtman rotated the image 36 degrees, or one-tenth of a circle, it appeared in exactly the same pattern. Atoms in crystals weren't supposed to show this tenfold symmetry. Yet, he could find no fault with his experiment.

This was, according to the textbooks of the day, an impossible structure for a crystal. Further investigation showed that the actual crystal had fivefold symmetry -- still impossible.

The first scientific journal he approached rejected his paper. According to Shechtman, the head of the laboratory where he made the discovery believed that the finding was false and eventually asked him to leave the research group.

"I think the main lesson that I have learned is that a good scientist is a humble scientist who is open-minded to listen to other scientists when they discover something," said Shechtman in an interview posted on the Nobel Prize website.

The discovery was eventually published in the journal Physical Review Letters in 1984.

Structure of a Discovery

Any 2-dimensional area, such as a tiled floor, can be covered without gaps by a pattern of triangles, rectangles or hexagons -- but not pentagons. An interior designer's nightmare, pentagons would create unavoidable empty spaces on a wall or floor. The same idea also rules in three dimensions, as figures with faces that have three or four sides can fill a given space, but not the 20-sided icosahedron, in which each face has 5sides.

After Shechtman found that the molecule had a strange symmetry, questions remained about how the crystal packed atoms together. The answers came from mathematical research, and 700-year old art.

Mathematicians challenged themselves to create an "aperiodic" mosaic, a pattern of a limited number of tiles that never repeated. In the mid-1970s British mathematician Roger Penrose created a simple solution from two differently shaped tiles, a thin rhombus and a fat rhombus.

Arabic artists had produced aperiodic mosaics out of as few as five different shapes by as early as the 13th century, and some of them decorate the Alhambra Palace in Spain.
The next step was for crystallographers to connect these aperiodic patterns to those found in the structure of metals.

Birth of a New Field

Quasicrystals were named by a paper, also from 1984, written by two physicists who brought together the developments in theoretical math and the strange new crystal structure. The pair, Paul Steinhardt and Dov Levine, connected mosaic patterns to diffraction patterns -- the same type of pattern Shechtman saw. Their independent efforts also revealed tenfold symmetry.

Quasicrystals were "a discovery that changed our ideas about what kinds of structures atoms can arrange themselves into. We thought the book was closed on this topic," said Steinhardt, who is now Albert Einstein Professor in Science at Princeton University in N.J.

"We now have a broader and more flexible framework in existence for understanding how atoms and molecules arrange themselves in nature than we did before that discovery," said Patricia Thiel, senior scientist with the U.S. Department of Energy’s Ames Laboratory in Iowa, and John D. Corbett Professor in Chemistry at Iowa State University in Ames. She said that Shechtman is a good friend. "I know what a clearly logical and independent thinker he is, and I'm so pleased he won the prize as a scientist."

Thiel said ideas developed from quasicrystal research are now used to "create and predict properties of photonic bandgap materials and phononic bandgap materials," structures that can prevent certain wavelengths of light and sound respectively from passing through them.

In Russia in 2009 scientists reported finding the first naturally occurring quasicrystals. Today, scientists are investigating the material's use in frying-pan surface coatings, light-emitting diodes, and more. Quasicrystals are now used to make steel stronger. They help to make up items such as electric shavers and surgical equipment.