Little reptiles may use stripes to trick predators into attacking their tails.
Image 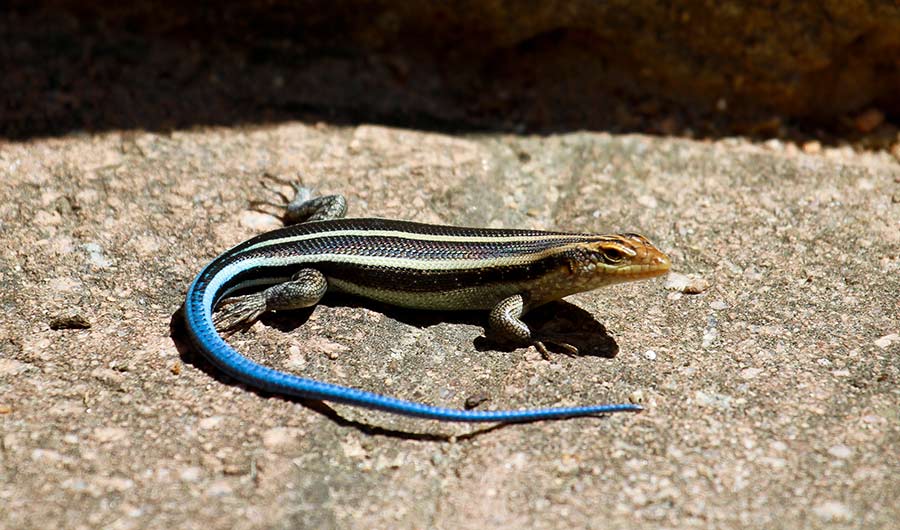 (Inside Science) -- Small stripy lizards may be faster than they appear, according to new research. The optical illusion may be why so many small lizards have stripy patterns, while their larger cousins are more often solid or blotched.

It's easy to see why many animals have evolved to blend in with their surroundings. A trickier puzzle is why some species display bold color patterns that make it hard to hide. Some conspicuous patterns are thought to help animals attract mates, while others warn predators that the animal is toxic. But some high-contrast patterns may disguise the speed or trajectory of animals in motion.

"For a camouflage strategy to work, [animals] have to sit still," said Gopal Murali, an evolutionary biologist and graduate student at the Indian Institute of Science Education and Research, Thiruvananthapuram and first author of a study published last month in the journal Behavioral Ecology. "People have started looking at how colorations might prevent animals being eaten when they're moving."

This "motion dazzle" idea dates back to 1909, and it is part of the reason why ships in World Wars I and II were sometimes painted with stripes and zigzags. But few tested the phenomenon until the past decade. Now researchers have started to explore it, mostly by having human "predators" interact with moving objects on a computer screen. Humans are much easier to work with than natural predators, although researchers will eventually have to turn to other species to confirm that motion dazzle happens in nature.

One common pattern thought to dazzle predators is the stripes that run lengthwise down many lizards' backs, usually stopping at the base of the tail. Murali and his colleagues hypothesize that such stripes redirect predators' attacks back toward a lizard's tail, which it can detach in order to escape. Last year, they tested this idea by having college students try to "catch" a virtual lizard -- actually a simple rectangle -- by touching its front half as it moved across a screen. As expected, longitudinal stripes tended to make people underestimate the rectangle's speed, causing them to miss and touch only the back half.

But Murali and his colleagues suspected that only lizards of a certain size can use stripes effectively. Many lizards' stripes fade as they grow older and larger, and in snakes, lengthwise stripes are more common in short species than in long ones.

In the new study, the researchers once more had humans try to grab rectangular mock lizards on a screen. But this time, they varied their shapes from long and skinny to square. The researchers found that stripes worked best on short lizards, regardless of width. As the lizards grew longer, they became easier to catch.

Next, the researchers looked at 1,634 real lizard species, and found that more than a third of them had longitudinal stripes. The striped species tended to be those with the shortest bodies, especially if their tails were proportionately long. Together, the findings suggest that small lizards have indeed evolved stripes as a way to trick predators into attacking their expendable tails.

"It is very cool that they have shown it in two different ways," said Bibiana Rojas, an evolutionary ecologist at the University of Jyväskylä in Finland who was not involved in the study. Rojas and her colleagues conducted one of the only motion dazzle experiments thus far that has used real predators -- in their case, small songbirds called great tits -- although the birds in Rojas's study didn’t find stripes any more confusing than other high-contrast patterns. Human experiments are good for understanding how stripes could trick predators in theory, said Rojas. Meanwhile, she said, Murali's analysis of real lizard species is a good step toward showing that it happens in the wild.

The finding that stripes work best for small animals may also help explain why similar studies have produced mixed results. According to the new study, experiments that failed to show dazzle effects tended to have the largest prey objects.

"I think this is a really great thing the study did," said Anna Hughes, a visual ecologist at the University of Exeter in the U.K., whose research had previously found no dazzle effects from longitudinal stripes. "So often we end up with lots of results, some people saying, 'Yes this happens,' other people saying, 'No, it doesn't happen,' and then it can be hard to come up with why these results are different."

The motion dazzle field is exploding, and for good reason, she added. It can address age-old questions about animals' most visible features. In the process, it forces us to see those animals in all their dynamic complexity.

"Having to think about movement suddenly makes you think a lot more about exactly what the animal's doing, and how it's living its life," said Hughes.