Earth Is Getting Fatter

A new analysis of satellite data shows that melting glaciers are contributing to a planet that is bulging around the center.
Image 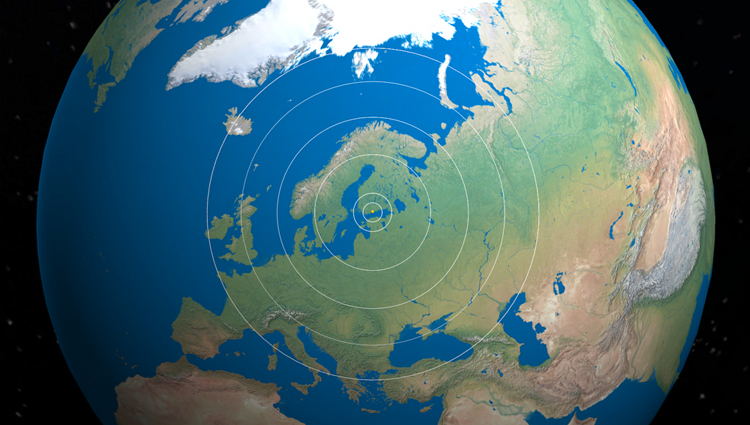 (Inside Science) -- Like many of its inhabitants, the Earth is getting thicker around the middle -- that's what a new study out this week says. The increased bulge is due to the melting of the Greenland and Antarctic ice sheets.

The Earth was never perfectly round to begin with, due to its spin. Just as an ice skater's skirt flutters up and away from her skates during her pirouette, water on Earth is more concentrated at the equator than at the poles.

As recently as 22,000 years ago, several miles of ice covered much of the northern hemisphere. Since the downward pressure of land-based ice has reduced as the ice melted, the land underneath has "rebounded" causing the Earth to become more spherical, said Steve Nerem, an aerospace engineer at the University of Colorado at Boulder and coauthor of a new analysis of the Earth's bulge.

"It's a bit like a sponge, and it takes a while to come back to its original shape," Nerem said.

Scientists had observed the bulge shrinking for years, but then something changed. Around the middle of the 1990s, they noticed that the trend reversed and the Earth was getting fatter, like a ball squeezed at the top and bottom -- but until recently they didn't have the tools to understand why.

Gravity depends on mass, so any changes to the Earth's shape changes the distribution of mass, and therefore its gravity field. Data from GRACE, the Gravity Recovery and Climate Experiment -- twin satellites launched in 2002 that make exacting measurements of Earth's gravity field to monitor changes in ice mass, the amount of water in the ocean and losses in continental water -- enabled the researchers to test a theory that the ice loss was changing the shape of the planet. GRACE took snapshots of the surface of the Earth every 30 days, allowing researchers to monitor changes in ice mass from the changes in the gravitational fields.

They found that melting glaciers Greenland and Antarctica were indeed the biggest contributors to the Earth's growing spare tire, as the huge amount of water was pulled to the equator. According to the researchers, the two regions are losing a combined 382 billion tons of ice a year. While the reduced mass on the continents will allow the land to spring back and make the planet more round, that process takes thousands of years. And in the meantime, the bulge is growing at about .28 inches per decade.

The planet's radius is about 13 miles bigger at the equator than at the poles right now, says Nerem. This means that the point on the Earth's surface furthest away from its center is not the summit of Everest but rather the top of an Ecuadorian volcano.

All this adds up to a strong signal that the planet is changing.

"This is another strong indicator of what's going on in the climate," said Byron Tapley, director for space research at the University of Texas at Austin, who was not involved in the current study. "How mass works in the Earth's system is a very dynamic process, and with a record of almost ten years [with GRACE] we're able to get a much better picture of what's going on."

Nerem says that one danger in the future of the research is that the GRACE satellites will fail sometime soon, probably within the year. While NASA is planning another satellite launch, the technology won't go up until 2016, leaving gaps in the timeline of scientific data.

"We're going to lose our eye in the sky," Nerem said.