Rare observation could support a 200-year-old story many have considered fishy.
Image

These images show an electric eel attacking a model of a crocodile's head fitted with LEDs that the eel's electric impulses light up. The sequence runs from the top left to the bottom right.

(Inside Science) -- In March of 1800, the German explorer and naturalist Alexander von Humboldt stood next to a muddy pond in the Amazon, watching local fishermen fish for electric eels. They weren't using nets. Instead, they had herded about 30 wild horses into the shallow, eel-infested water and, prodding with pointy reeds, kept the terrified animals from escaping.

Amidst all those stomping hooves, the eels attacked. They surged out of the mud, and zapped the animals with a volley of electric shocks. By the end of the turmoil several minutes later, two of the horses had drowned, while others had collapsed on the bank. The exhausted eels were helpless as the fishermen scooped several up and delivered them to the scientist.

At least, that's the way Humboldt told it.

But no similarly dramatic behavior has been reported in eels in the more than 200 years since. And many have long wondered whether the story was just another fish tale.

Now, a new study that shows eels leaping out of water to attack a partially submerged "threat" lends some credence to the fantastical account. "It's just horrifying," said Philip Stoddard, a zoologist at Florida International University in Miami, who studies electric fish but wasn't involved in the research.

The study's author, Kenneth Catania, a neurobiologist at Vanderbilt University, first witnessed the behavior in his lab, which in recent years has been a safe space for electric eels to unburden long-held secrets. Scientists have long known that the specialized, battery-like cells that make up the eel's body allow it to generate powerful blasts of electricity up to 600 volts, more than is enough to stun their usual small prey or leave human limbs aching. But Catania's work has revealed a surprising degree of sophistication and nuance in how eels, which aren't really eels, but a type of knifefish, use their electric power.

He's shown that the eels don't simply turn on their voltage to stun prey and wolf it down; instead, they can deploy pairs of subtle shocks that can cause hidden creatures to twitch, revealing their position. At other times, he's revealed, the eels curl themselves around their victims, thus strengthening their electric field and doubling the power of subsequent shocks.

His "results are literally rewriting the book on what we know about the electric behaviors of the electric eel," said James Albert, a biologist at the University of Louisiana at Lafayette who wasn't involved in the research, in an email.

Catania's current study has its origins in the mundane act of moving eels from one aquarium tank to another. Usually, the eels would swim away from his net, but sometimes they spun around and explosively leapt up the handle.

"Electric eels don't generally jump out of the water," said Catania. "So this was really unusual and intimidating because it's coming up towards your arm. I'm kind of fond of these animals, so it's not like I'm terrified of them. But it was still a very surprising and deterrent sort of behavior, even for me."

He has rigged his lab with a monitoring system that crackles when the eels release electric pulses. Because he happens to use a net with a metal rim and handle (which he grips confidently with rubber gloves), Catania could hear that the eels jumping at his net were trying to give him a high-voltage handshake, and he decided to investigate.

Like most people interested in electric fish, Catania had read Humboldt's famous story, and he thought it "bizarre and kind of unbelievable." Even more fantastical than the written account is an 1843 illustration of the battle, seen below, by Robert Schomburgk, a naturalist and friend of Humboldt, which depicts gravity-defying eels zapping a knot of hapless horses. When Catania came across the drawing, the light bulb went off.

"It was the most detailed illustration of his story that I'd ever seen . . . And right in the middle was an eel doing exactly what I was seeing," said Catania. "That just amazed me and made the story twice as interesting as it already was." 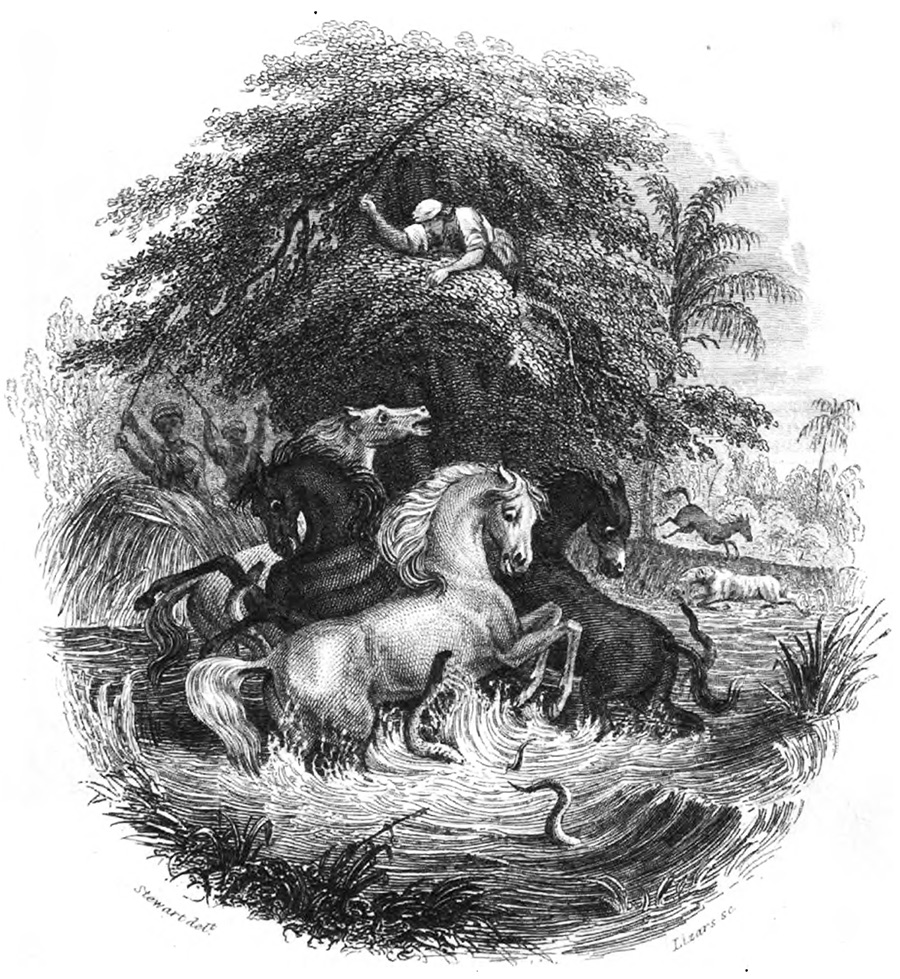 A historic illustration of Humboldt's account of a battle between electric eels and horses in South America in 1800.

In the new study, Catania first moved a partially submerged conductive plate or carbon rod through the eel's tank, mimicking the approach of a large, terrestrial or semi-aquatic predator. The eels leapt from the water, pressed their chins against the perceived threat, and discharged high-voltage volleys. And, as it turns out, the higher the eel jumps, the more powerful the shock, according to the study published today in the Proceedings of the National Academy of Sciences.

That's because the power of the eel's pulses when the animal is fully submerged is distributed throughout the water, with most of the current coming out of the eel's head and tail but with some "leakage" out of the sides of the body. But a leaping eel benefits from the insulation provided by air, which prevents electric current from leaking from the exposed body of the eel. Instead, that extra current is forced out of the eel's head and must travel directly through the target before exiting back into the water and returning to the eel's tail. That completes the circuit and, in the process, puts even more juice in the eel's jolt.

To better demonstrate how the behavior could deter a predator, Catania outfitted two plastic props -- a human arm and a crocodile's head -- with a conductive strip connected to LED lights. When the props were lowered into the water, the eels reacted as expected, thus powering the LEDs, which shone brightest when the eel's jump reached its peak.

"Each time you see the [lights] flash, think of the pain nerve fibers firing," said Catania. While his other work has shown that eels can use their electric prowess like a Taser to freeze their prey to help them catch it, "this way is more like an electric fence, where they're able to cause very efficient pain."

Still, given that submerged eels deliver such powerful shocks, why would they risk exposure by launching a large portion of their two-meter long bodies out of the relative safety of murky waters?

The answer is, perhaps, desperation.

In the South American dry season, electric eels and other fish become trapped in shrinking pools, making them sitting fish to larger, terrestrial or semi-aquatic predators like caimans and jaguars. Because they aren't completely submerged, those animals are protected from the full force of the swimming eel's shocks. Although they'd still feel a bit of a jolt if shocked, depending on how much of their body was in the water, if they're hungry enough it might not keep them from hunting eel.

The leaping behavior takes advantage of the basic physics of electricity, ramping up the power of the shock as the eel comes out of the water. And it helps the eel reach a larger portion of the would-be predator's body for the greatest effect.

If the eels only have a limited amount of energy to expend to deter a hungry predator, Catania said, "best to deliver it with maximum efficiency."

Although he doesn't know if the behavior happens in the wild or if other electric fish would attack this way, Catania plans to continue illuminating the eel's secrets. He credits the animals themselves, in part, for his success so far. The eels, he said, "have led the way in telling me what the interesting questions were."