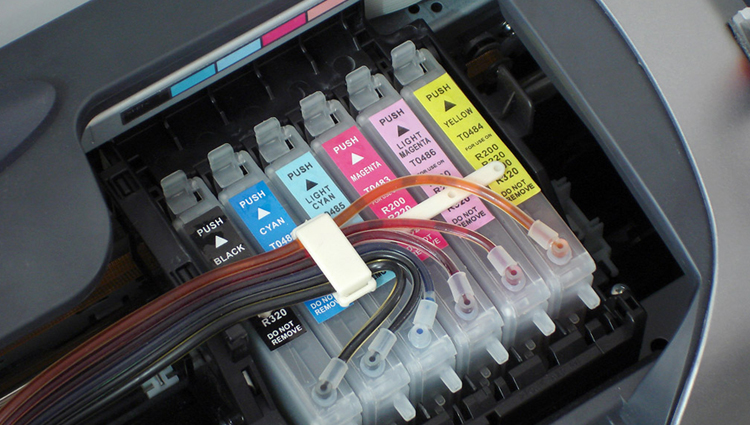 (Inside Science) -- It isn't often that you can learn to build a better inkjet printer by studying eyeballs, but researchers have done just that.

One of the problems with an inkjet printer is that the cartridges can clog up. This can happen if the nozzle has dried-up ink, from infrequent use, or if it contains air bubbles, which can form after changing cartridges. When you send a job to a clogged printer, wet ink from the cartridge has to blast through the crust or air bubbles, and if it manages to work at all, you end up with some wasted ink.  If you are using one of the new 3-D printers for additive manufacturing, it could waste even more expensive materials.

Like printers, eyes also require a consistent supply of moisture. Nature washes eyes in tears, spread on the outside of the eye with each blink. The problem is that the tears can evaporate in contact with air, leaving the eye dry and irritated if blinking isn't constant.

That usually doesn't happen because the outer layer of tears is a lipid layer secreted by the meibomian gland on the rim of the eyelid that prevents evaporation by keeping the rest of the tears from contact with the air.

The device invented at the University of Missouri ends the printer problem by imitating how eyes cope, said Jae Wan Kwon, associate professor of engineering.

"It can be used on any kind of inkjet printer out there at low cost, and it works just as well on the larger printers," Kwon said.

The nozzles in inkjet printers are tiny. They are 45 microns wide, half the diameter of a typical human hair. The small size itself is a problem.

The system designed by Kwon and Almeida covers the nozzle of the printer with a droplet of silicone, keeping the nozzle and the ink at the nozzle mouth moist by blocking contact with the air.

Mechanically blinking the silicone over the tiny nozzle with tiny shutters or mechanical eyelids won't work because surface tension would keep the nozzle closed, Kwon said. His process moves the droplet of oil off the nozzle when it is ready to print by an electrical field. When the printing is done, the field covers the nozzle with more oil.

"The oil drop can be used on any kind of print head," Kwon said, including most if not all the printers used in home and office. Since ink cartridges are the most expensive part of operating a printer, which could save a considerable amount of money.

Printers are sold with the same business plan that got King C. Gillette rich: His razors were cheap enough to encourage a sale, and the profit came in expensive blade refills. In printers, the machines are cheap, and the profit is in the ink cartridges.

It can be expensive. A 2009 report by printer manufacturer Lexmark International and O'Keeffe & Co., a marketing firm, indicated that the federal government alone wastes $440 million a year in printing and each federal employee prints an average of 30 pages a day.

Further, studies show that when printers signal that they are out of ink, they often aren't. A study by the magazine PC World showed that in some brands, the printer signaled "empty" where the cartridge still had nearly half its ink.

Anything that improves the efficiency of printers would help business and government.

Thom Brown, a supplies expert at Hewlett Packard, said the manufacturer was aware of the potential problem.

"HP already takes a number of steps to avoid ink from drying in cartridges such as cartridge design, ink chemistry, careful selection of ingredients, printer design, and servicing algorithms," said Brown. "Additionally, HP printers are equipped with a physical cap to prevent the ink at the print head from drying out while the printer is not in use. Under normal wear and use this design performs very well to prevent ink drying at the nozzle."

Brown said using the manufacturer's ink, drying shouldn't be a problem if the printer is used normally.

In 3-D printers, some of which extrude plastics or biological material, the savings could be even greater.

"These cells are so expensive that researchers often find it cheaper to replace the nozzles rather than waste the cells. Clog-free nozzles would eliminate the costly replacements," Kwon said.