Fox-like dog described by first Europeans to visit the remote islands was an ecological anomaly.
Image 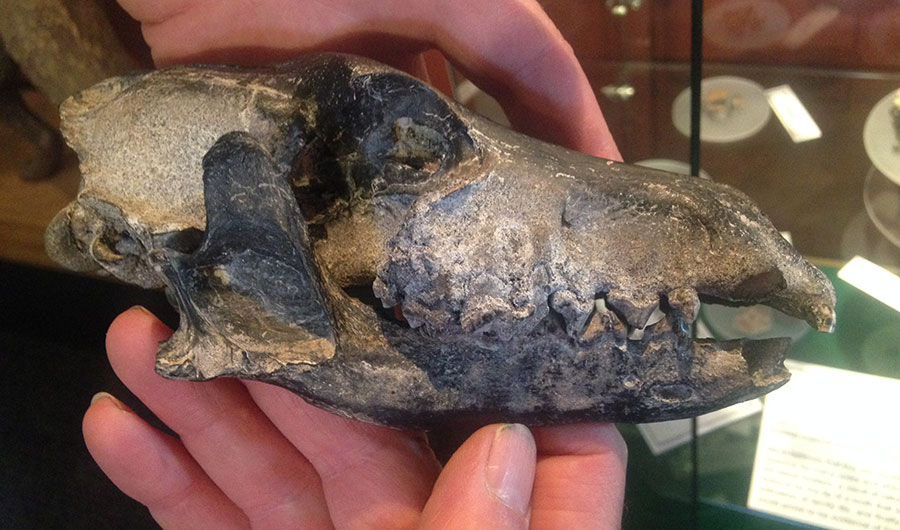 A fossil warrah skull found at Spring Point Farm on West Falkland. The skull is housed at the Falkland Islands Museum and National Trust.

(Inside Science) – An unknown population of humans that left few traces on the landscape of the Falkland Islands may have brought large fox-like dogs still present when Europeans first visited the archipelago in the late 17th century.

The Falkland Islands sit roughly 300 miles east of Argentina in the southern Atlantic Ocean. They were uninhabited when English captain John Strong first visited in the late 17th century and weren’t settled until the 1760s or 1770s. Whalers and seal hunters bolstered the area's population in the 19th century, then Argentina and the United Kingdom went through a series of sometimes bloody conflicts over control of the islands over the next two centuries -- a dispute that continues today.

“It’s still an incredibly remote and sparsely populated archipelago,” said Kit Hamley, a graduate student in paleoecology at the University of Maine in Orono.

But the warrah, a fox-like canid related to other dogs, also sometimes called the Falkland Islands wolf, was ubiquitous on the archipelago before Europeans ever arrived -- and they were even strangely docile with humans, according to historical accounts.

“They would swim out to greet incoming boats and take meat right out of people’s hand,” Hamley said.

The presence of a large land predator -- the islands' only native terrestrial mammal at the time -- was an oddity that even bothered Charles Darwin during a visit. Then, shortly after he visited, the warrah was gone. “Within about 40 years of regular European settlement, it had gone from a thriving animal to one very rapidly hunted to extinction,” Hamley said.

Now, in a study published today in Science Advances examining a mixture of archaeological and ecological evidence, researchers hypothesize the warrah may have been brought to the islands by Indigenous South Americans, perhaps millennia before Europeans first visited.

To test this theory, they dug in places they thought humans were likely to have used in search of increased levels of charcoal -- a possible sign of past campfires. Some sites showed levels of burnt material peaked roughly 1,800 years ago, and again about 550 to 400 years ago.

Hamley and her colleagues also analyzed various piles of bones left on one island under accumulations of peat and found they contained the remains of dozens of sea lions and penguins from different ages.

“Those animals wouldn’t have naturally chosen to die in a pile together,” she said.

A local told the researchers that her dad had found a stone point that might be from a spear or an arrow in an area near the bone piles. Previously, there was no known evidence of human presence on the islands, so the researchers were unclear how the warrah may have arrived. Together, this new evidence suggests the presence of humans, possibly the Yaghan people who still live on Tierra del Fuego in Argentina and Chile today, the researchers believe.

“All of these lines of evidence converged at this one site,” Hamley said.