In Face Of Drought, Golf Tries To Reduce Water Use

Grasses that survive on salty water and smart irrigation systems are among many new golf innovations.
Image 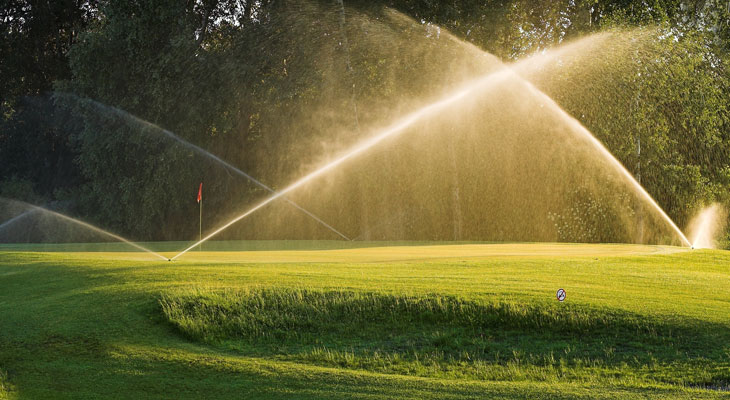 (Inside Science) -- In California’s current historic drought, there’s one particularly easy target when it comes to pointing fingers: green golf courses. Courses around the U.S. suck up around approximately 2.08 billion gallons of water per day for irrigation. That’s about 130,000 gallons per day per course, according to the golf industry.

In California, Governor Jerry Brown has announced a statewide mandate to reduce water consumption by 25 percent -- but that number actually varies depending on the water district, signifying a reduction of anywhere between 4 and 36 percent. Since there are about 1,140 golf courses in California, reducing water use by one quarter would reduce consumption by 37 million gallons of water per day -- about a million bathtubs full.

The golf industry uses a substantial amount of water and is therefore working on ways to make courses more sustainable, with new irrigation technologies, new types of grass, and new layouts that are easier on the environment.

"Golf and agriculture, having large water footprints, are typically the first to entertain, evaluate and experiment with new technologies," said Mike Huck, a California water management and recycled water expert with Irrigation & Turfgrass Services in San Juan Capistrano, California. He pointed out that in golf -- as opposed to agriculture – people have to keep two goals in mind: aesthetics and playability of the turf.

For example, irrigation systems based on evapotranspiration, -- evaporation of water from surfaces and transpiration by plants of water in soil over time (also known as ET) -- started in the golf world in the 1980s. Around the same time, golf courses in the Southwest started putting up their own weather stations to record all kinds of data, including temperature, relative humidity, wind speed and direction, solar radiation, and precipitation. That data helps them make computerized decisions about when and how much to water. Evapotranspiration is like a checking account, with moisture coming in and going out.

"ET helps us to predict how much water we used the day before, so how much we need to replace in the soil to keep it in the proper range," explains Huck.

Today's golf courses use technology to make watering even more precise. A typical golf course may have 3,000 sprinklers buried throughout the different areas, explained David Angier, a senior marketing manager with Toro Golf Irrigation. Toro makes a system that automates all the watering from the sprinklers, down to one-second increments.

In addition, wireless soil probes give information on soil moisture, salinity and temperature, which is important because fertilizers impact grass differently at different temperatures.

Some golf courses are using water from wastewater plants that has been treated to remove any biomaterials but is still high in salts. According to Angier, only about 15 percent of courses use this type of water. Most don’t have access to it, and the pipes to carry the water from a wastewater facility are expensive.

The type of grass is also an important factor in water use. While courses traditionally use Bermuda grasses – a popular, fast-growing, and tough turf option -- the United States Golf Association (USGA) has been working for decades to breed and cultivate salt-tolerant grasses, including the inland saltgrass and seashore paspalum. Tolerance to salt is important as more courses look to use poor-quality water on turf.

"New grasses may emerge that will have breakthroughs," said Pat Gross, regional director of the Western region at the USGA’s Green Section. "Breeding work takes a long time, so part of the focus is identifying genetic markers and introducing traits more quickly to produce a commercially available product sooner."

The USGA's green section is also working to make the traditional grasses, including Bermuda, use less water. Oklahoma State University and Texas A&M University have demonstrated that Bermuda grass can survive on just 60 percent of estimated ET during the summer.

One Southern California golf club was able to reduce its summer water usage by 35 percent by changing its grass and incrementally reducing the amount of water on the greens. The state has also offered turf reduction rebate programs run by water agencies, paying golf courses $2-$3 for every square foot of turf removed.

"You can consider golf to be sort of analogous to other water-intensive businesses like car washes or commercial laundries," said Ed Osann, a senior policy analyst with Natural Resources Defense Council (NRDC) Water Program "In the overall scheme of things, golf is a small slice of water use, but at a particular location the use can be substantial."

Even tweaking the layout of a course -- removing turf and adding sand or cactus plants -- can decrease a golf course’s water budget significantly. Some of these changes actually make golfers play better by giving them an area of green turf to focus on, explained Huck. "There’s a psychological effect in multiple directions when these changes come in," he said.

NRDC's Osann mentioned a course that started to use specialized software that mapped where players and golf carts traveled around the course. "They simply converted the parts of the course where people didn’t go into low-water-use areas," he said. Going forward, he believes that golf courses must start to use non-potable (recycled) water in order to survive.

But can golf be a force for good? Despite the fertilizer, water and space it requires, golf turf can help the environment in some tangible ways. To start, grass reduces soil erosion in dusty places. And grasses, like any plants, do absorb carbon from the atmosphere.

Golf courses could be sanctuaries for wildlife. A 2009 study published in USGA Turfgrass and Environmental Research Online showed that 70 percent of golf course land wasn’t being actively used, and could be managed to increase amphibian, bird and other wildlife populations. For example, letting ponds go dry for part of the year, which mimics natural annual cycles, would help frogs gain hold in ecosystems near golf courses.

When it comes down to it, golfers just love the game -- and the green. "I think golf courses are important because they provide an open area of green space," said Huck. "We’re doing a lot to reduce turf average and footprint."

(6/18/2015): We have removed from the story a reference to an estimate that golf courses use about 312,000 gallons per day. Doug Bechtel, president and CEO of Audubon International, reported that although this figure is widely used and attributed to them, they did not produce it.

(6/23/2015): The original story misstated the average number of sprinklers per golf course. That number is about 3,000. We regret the error.