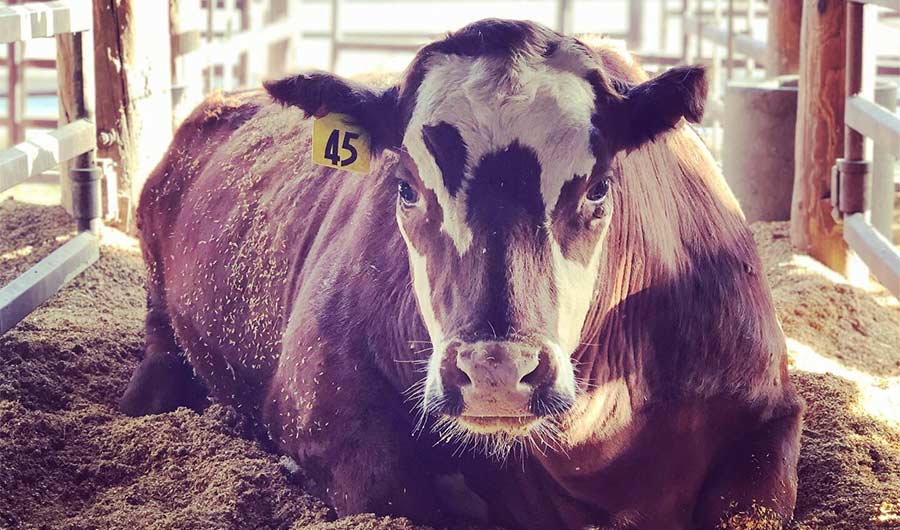 One of the steers in the experiment. The steers produced less methane when seaweed was added to their feed.

(Inside Science) -- The millions of tons of methane that livestock belch out account for a whopping one-seventh of humanity's greenhouse gas emissions. Now scientists find that adding a tiny amount of seaweed in their meals could more than halve their methane emissions without compromising the quality of their meat, and it could even boost their productivity.

The methane from livestock mostly results from microbes in their guts breaking down the plant cellulose in their diets. Previous lab experiments found exposing these microbes to red seaweed could reduce their methane production by 99%. A molecule found in this seaweed and known as bromoform, which chemically resembles the potent global warming gas methane, can glom onto and suppress a key methane-generating enzyme within these microbes.

In the new study, researchers fed 21 Angus-Hereford beef steers their usual diet of hay, grain and corn, supplemented with doses of red seaweed averaging roughly 50 to 80 grams per day. They monitored the level of methane, hydrogen and carbon dioxide each of the bullocks released over 21 weeks.

The scientists found the seaweed supplements cut methane emissions between 45% and 68%. The amount of hay and other forage the cattle received also influenced emissions -- the greatest reductions were seen in the high-seaweed, low-forage diet, which cut methane production by as much as 80%. "I was completely blown away to see how effective seaweed was," said study senior author Ermias Kebreab, director of the World Food Center at the University of California, Davis.

The cattle fed the seaweed grew at normal rates even though they ate less food on average. The researchers suggest cattle given the seaweed grew more efficiently, benefiting from nutrients their gut microbes would have otherwise fermented into methane. In other words, with the help of the seaweed, "for the same amount of feed, you're getting more gain," Kebreab said. All in all, "a producer finishing 1,000 head of beef cattle could potentially reduce their feed costs by about $40,000 to $87,000, depending on the amount of seaweed they use."

In addition, professional grading and consumer tests found the seaweed supplements had no effect on the quality or taste of the meat. "Compared to how much the animals eat daily, the amount of seaweed we give them isn't all that much a day," Kebreab said. "So it's not enough to make any impact in terms of flavor."

Previous research has found that bromoform can break down ozone. Still, bromoform is a very short-lived molecule, and hopefully future research can help ensure no bromoform leaks from seaweed during its production, Kebreab said. "We don't want to swap one pollutant for another," he noted.

The scientists detailed their findings online March 17 in the journal PLOS ONE.