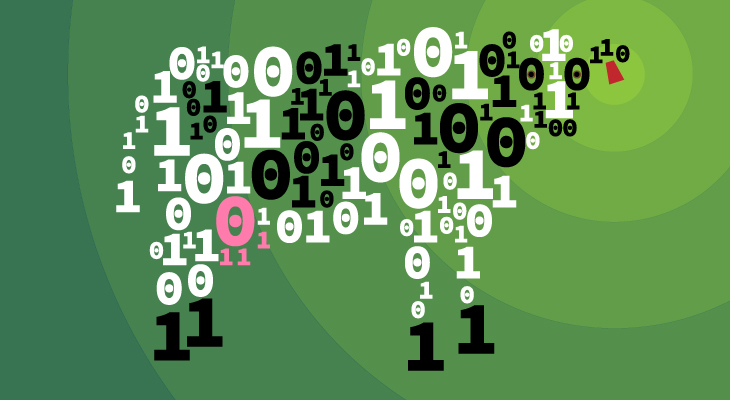 (Inside Science) -- Wearable fitness monitors are all the rage among humans right now, but they are also spreading among farm animals. Researchers hope the devices can help keep herds of beef cows healthy.

Karin Orsel, a veterinary epidemiologist at the University of Calgary in Canada is testing how accelerometers -- the same devices inside fitness monitors that measure a person's activity level -- can be used to detect disease in beef cattle before it becomes obvious to ranchers.

Farms have a long tradition of taking advantage of cutting-edge tech. Robotic milkers, computer-controlled food bunkers and accelerometer-equipped ear tags have become common on dairy farms, helping farmers track the health of their herds and detect illness or pregnancy early.

But beef cattle operations have so far been slow to take up technology in comparison to dairy farms, a lag partly due to logistics. The average dairy herd might have a couple of hundred animals, but a beef feedlot will generally have tens of thousands of cows -- making the adoption of a new technology a much more expensive proposition.

Physiological differences between beef and dairy cattle also complicate matters, since "beef and dairy cattle are very different in their feed, housing and genetics," said Orsel. Karen Beauchemin, a researcher with Agriculture and Agri-Food Canada in Lethbridge, Alberta, tested on beef cattle acoustic collars that have been used in dairy cows to monitor the chewing of cud, material that is regurgitated from a cow's stomach as part of its digestion process. The collars were not especially useful for beef cows because the acoustic sensors couldn't hear through the thick neck muscles. "The neck is very different in beef animals," she said. "There is a lot more bulk there."

These challenges make it all the harder to transfer technology from the dairy industry to the beef industry. But the ability to spot disease early is a real benefit for both industries, allowing sickness to be treated earlier. "By the time the cows show clinical signs of disease, it's quite late in the disease process, up to seven days after infection," Orsel said.

Orsel and her colleagues attached accelerometers to the identification tags in the ears of 18 cows and used the information it collected about how the cows' ears moved to identify how much time the cows spent eating, chewing their cud, resting, and moving around. The accelerometer-equipped tags are made by a Dutch company, Agis Automatisering, which has also developed an algorithm that interprets the movements into specific behaviors. Spotting changes in activity, especially in how much time is spent eating and chewing cud, could help identify illnesses like bovine respiratory disease, the most common and costly disease affecting the beef industry, she said.

When compared with observations by people, the ear tags could identify when a cow was eating feed with 95 percent accuracy, but were not useful for identifying cud chewing -- getting it right just 49 percent of the time. Orsel had also hoped to test the tags' ability to identify sickness, but too few cows got sick during the experiment to give a useful sample size. "That was unfortunate for us, but fortunate for the cows, I guess," said Orsel, whose team published the result in the May issue of the Journal of Animal Science.

The experiment showed that such technology could potentially be useful in the future, but it isn't yet ready for regular use in beef herds, said Orsel.

Joseph Stookey, who studies animal behavior at the University of Saskatchewan in Saskatoon, said the ability to quickly identify a few sick animals in a huge herd would be an advantage, but cautioned that algorithms lack the judgment of the human pen-riders who monitor the health of herds today and could lead to overuse of antibiotics. Some animals will get better without treatment, a decision that experienced pen-riders are used to making, he said. "It’s a fine art between the riders and the animals," he said. "Computers can't always do that."

For now, he said, these technologies probably have more use as research tools than in the commercial beef industry, by allowing scientists to study larger groups of animals more efficiently. "If there is a place for them, the industry will figure it out," he said.

Both Orsel and Beauchemin say that despite the uneven record so far, wearable and remote-sensing technology will be a big part of beef cattle farming in the future. "We're not at that point yet, but we could be soon," said Beauchemin.