The Flattest Material In The World

The Flattest Material In The World 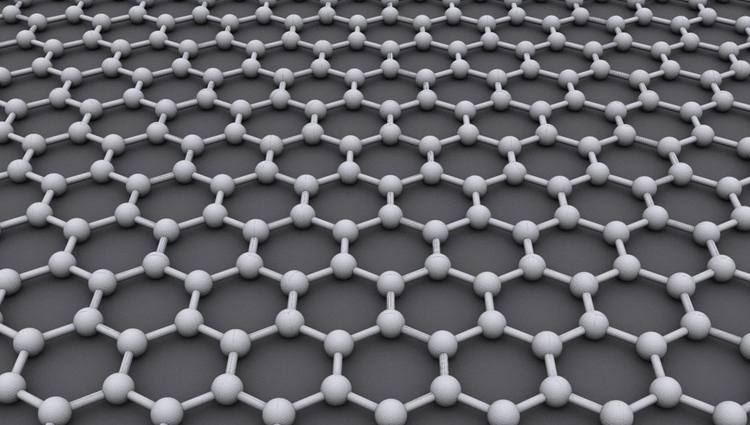 WASHINGTON (ISNS) -- The Nobel Prize for physics goes to Andre Geim and Konstantin Novoselov, both Russian-born physicists now working at the University of Manchester in the U.K., for their discovery of graphene.
Graphene is a sheet-like substance made of carbon atoms bonded together in a repeating hexagonal pattern. It is the first essentially two-dimensional material ever made.
Being the thinnest piece of matter in the world is just one of many superlatives that can be applied to graphene. It is also the strongest material known, about 100 times stronger than steel. Since a sheet of graphene is only one atom thick, it is also transparent, and therefore may play a role in the development of future electronic displays.
Some of the most interesting features of the material, from the point of view of future applications, have to do with its electrical properties. Electricity flows quickly through graphene and without losing much energy along the way. This, coupled with the fact that it is relatively easy to fabricate, makes graphene a candidate for replacing or enhancing the integrated circuits that fill our computers today. This circuitry is often built around tiny etched bits of silicon that contain billions of transistors, each of which can act like a switch which is either in an ON or OFF position or, alternatively, can be set as a 0 or a 1 in the binary logic used by computers to store and process information. Graphene chips may be cheaper, faster, and easier to fabricate than silicon chips.
One thing slowing graphene’s use in electronics is that it might be too good a conductor of electricity. To act as a switch a transistor needs to be turned off and on quickly. The semiconducting materials normally used in transistors are, by their nature, poised halfway between conducting and not conducting electricity. That is, by the input of a very tiny signal they can allow an electrical current to pass through (designating the ON position) or not pass through (the OFF position). Pure graphene, being mainly a good conductor, cannot be switched on and off. However, Geim and many other scientists believe that graphene can be altered to solve this problem.
A Down-to-Earth Discovery
Geim and Novoselov and their colleagues discovered graphene in a very humble way. They took a bit of Scotch tape and ran it across a piece of bulk graphite, the same stuff used in pencils. The tape removed carbon flakes that were many layers thick. But by repeated use of the tape, thinner and thinner flakes could be produced, including some eventually that were only a single layer thick.  Microscopic pictures confirmed what the human eye could not see.
Graphene is sometimes compared with carbon nanotubes, essentially pieces of graphene rolled up into a straw shape. Both are very good conductors of heat and of electricity. Both are quite strong.
"Graphene is the fundamental basis of all carbon nanostructures, including carbon nanotubes, fullerenes, and lots more and has been the holy grail to the research community for many years," said Mildred Dresselhaus, a physicist at MIT and an expert on these various forms of carbon. "It is great that Geim and Novoselov have now been recognized by this wonderful prize for having the idea of actually producing graphene in a simple way and for developing beautiful physics based on this material."
The King of Sweden will bestow the award on Geim and Novoselov in a Stockholm ceremony in December.
In an offbeat footnote to today's announcement, Andre Geim has become one of the few scientists to possess both a Nobel Prize and an Ig-Nobel prize. The Ig-Nobels are sort of the anti-Nobel prize; they are awarded partly as a joke and partly to make people think. Geim won an Ig-Nobel in 2000 for levitating frogs using magnetic fields. This work was not bogus, just strange.
Meanwhile, Geim and other researchers expect to find plenty of other applications for graphene.  Besides use in building materials or electronics, graphene might emerge as a basis for chemical sensors and for generators of terahertz-range light. This type of radiation, with frequencies of about one trillion cycles per second, is somewhat difficult to produce. It might be important as a new imaging tool since human bodies are transparent at this frequency, making this sort of light wave useful for security or medical scanning machines.

Newly Discovered 'Feather Duster' Worms Use Bacteria To Digest Methane in the Deep Ocean
The CRISPR War Raging Inside Bacteria
Around a World That Is Practicing Social Distancing
Disgust Evolved To Protect Us From Disease. Is It Working?
Lab-Grown Meat Climbs to New Heights on Scaffolds of Soy
END_OF_DOCUMENT_TOKEN_TO_BE_REPLACED