Scientists look to nature to make a glue that can bind wet surfaces together.
Image 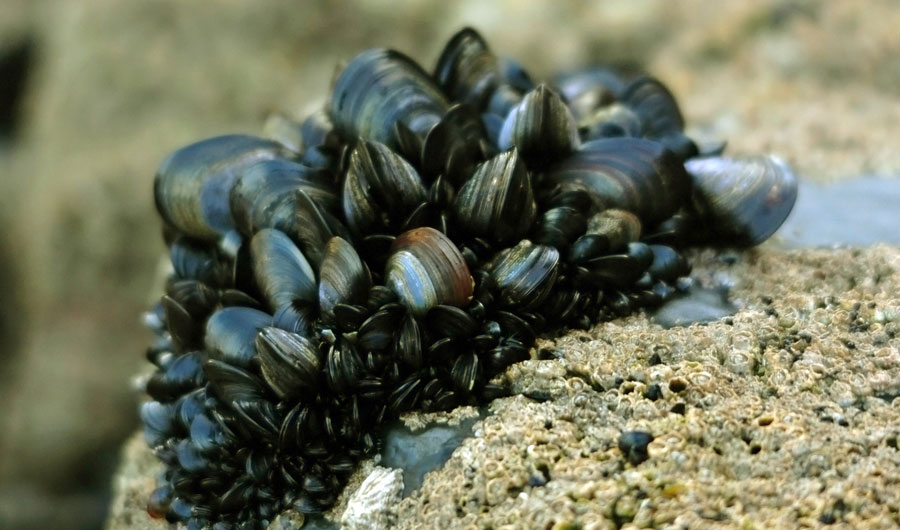 (Inside Science) -- Researchers have created a new underwater glue using materials inspired by mussels -- and a dash of soybean.

Marine organisms can adhere to underwater surfaces with admirable ease. But since one can't extract glue from a mollusk as easily as milk from a cow, scientists have long tried to come up with synthetic alternatives that can mimic the water-impervious grip. One particular compound of interest is found in the long sticky strands that mussels use to cling onto seaside rocks like Spiderman. The key ingredient is known as L-DOPA and it is a close relative of dopamine, the organic chemical perhaps best known for its role in humans' perception of pleasure.

Researchers have done a lot of work trying to make L-DOPA in the lab and then use it to stick things together underwater, said Ali Dhinojwala, a materials scientist from the University of Akron in Ohio who led the research that created the new glue. But even though scientists have managed to synthesize the L-DOPA molecules, many challenges remain. For instance, the molecules form a solid at room temperature -- not exactly what you want for a glue.

"Imagine trying to squeeze glass out of a tube -- it's just not going to work," said Dhinojwala.

To solve this problem, Dhinojwala and his team looked into ways to cook up a new material with L-DOPA that can retain all its stickiness, but can also be squeezed out of a tube.

Now take a deep breath and try not to get queasy. While stringy mussel fibers swimming in soybean oil may not sound appetizing, the recipe turns out to be a great inspiration for an underwater glue.

By combining the chemistry of free-flowing soybean oil and sticky mussel glue, Dhinojwala and his colleagues created a gooey substance that can join surfaces underwater. The greasy substance also happens to be hydrophobic, meaning that it repels water. After all, if the reason that normal glue does not work underwater is the water itself, then why not make a glue that can, you know, push away the wet stuff?

"We've actually known that hydrophobicity is important for underwater adhesives for quite some time, so it's not entirely a new idea," said Chao Zhong, a materials scientist from Shanghai Tech University in China who was not involved in the study. "But from a material perspective, what they have is very interesting. Especially because you can apply it without using any solvent. It may have some potential biomedical applications."

Medical applications, such as sticking tissue back together after surgery, are a huge driver of the studies on underwater adhesives, and researchers are constantly looking for materials well-suited for such delicate tasks. Compared with existing adhesives for wet environments, Dhinojwala's glue has a few advantages. Because it doesn't need a solvent and is also hydrophobic, it can't be washed away as easily, say, by a gush of blood. Another advantage is that the glue, which the researchers describe in a paper in the journal Advanced Materials Interfaces, is biodegradable and likely nontoxic, unlike many solvent-based adhesives.

The group still has a long road ahead before their glue can show up next to an operating table. For instance, it still needs to be tested on soft biological tissues instead of just aluminum and glass plates. The glue could also use some improvements in the process it takes to set, since currently it needs to be exposed to a UV light for several minutes before the two surfaces are securely stuck to each other.

Even if these challenges can be overcome, there is perhaps still one major property that separates a synthetic glue from a natural one.

"In a living system, if somehow the adhesive is damaged, there's usually some kind of a self-repair mechanism," said Timothy Lu, a materials scientist from Massachusetts Institute of Technology who was also not involved in the project. "That's something that synthetic systems can't necessarily replicate at this point."

Recent research efforts such as one led by Lu himself are actually making some progress in figuring out how to incorporate living cells and bacteria to make a "living glue." But, for now, it seems like the 4-dollar-per-pound shellfish is still sticking it to the scientists who try to mimic its power.