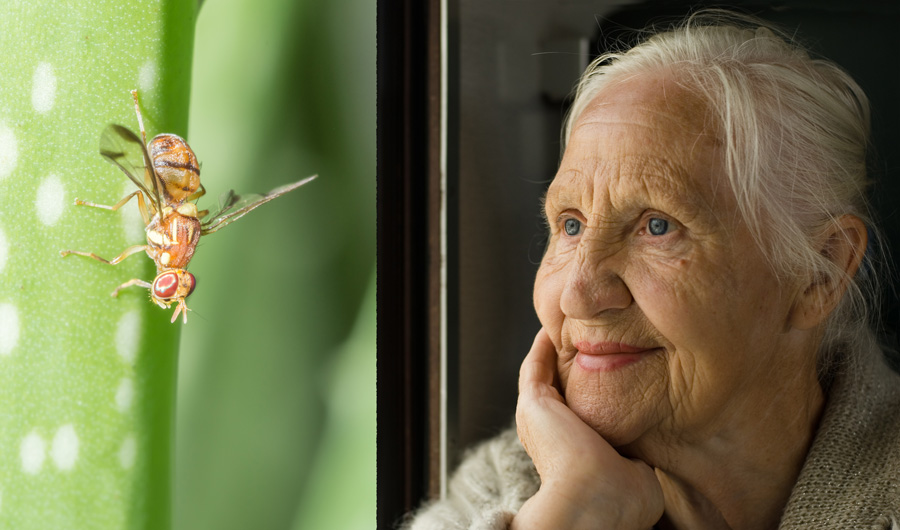 (Inside Science) -- In the mid-1990s, a 69-year-old woman in Utah made a startling observation: Two of her granddaughters had the same strange sleep patterns she did. They awoke hours before most people stirred and found themselves exhausted early in the evening. The woman said she had long felt saddened that she couldn't spend evenings with her husband, and she disliked waking up when it was "cold, dark and lonely," recounted Louis Ptacek, a neurologist and neuroscientist at the University of California, San Francisco. Fearing a similar fate for her grandchildren, she went to doctors and researchers for help -- and answers.

By then, researchers already knew that a gene called period helps regulate the daily cycling of fruit flies' bodies, known as circadian rhythms. Those fruit fly discoveries, made in the 1980s and 1990s, are the foundation of the work that won this year's Nobel Prize in physiology or medicine. But when the Utah woman sought help for her family, it wasn't yet clear that the findings would be relevant to humans.

When researchers examined the woman's extended family, they found that at least 28 of her relatives had the same condition, sleeping and rising four to six hours earlier than most of the population -- although not all of them viewed their early schedules in a negative light, said Ptacek.

The researchers tested the woman's natural daily cycle length by having her spend 21 days in a laboratory apartment with no windows, no clocks and only dim lights, insulated from external cues about the time of day. Her body settled into a rhythm that was about an hour shorter than the normal 24-24.5 hours, a difference that could theoretically result in dramatic schedule shifts, according to a study published in Nature Medicine 1999. In a second study published in Science in 2001, Ptacek and his colleagues traced the family syndrome to a mutation in mPer2, the human version of the fruit fly's period gene.

"It basically closed the circle," said Michael Rosbash, professor emeritus at Massachusetts’ Brandeis University and one of the researchers who won the Nobel Prize earlier this week. "It showed that the fruit fly genes work in humans, and they work in timing a very basic and important process, namely the sleep cycle."

That's not to say that the human and fly systems are identical, noted Ying-Hui Fu, head of another laboratory at University of California, San Francisco that collaborates closely with Ptacek's lab. The specific mutation the Utah woman carried was in a part of the gene that doesn't even exist in flies. Nevertheless, the genes are similar in both species, and they seem to perform much the same function. Mutating the equivalent gene in mice can shift their schedules earlier, just as it does for flies and humans.

Every part in rhythm

The period gene has a special place in history, said Rosbash, because it was the first part of the body's clock mechanism that we really understood. But, he added, it's just one of about eight to 12 key genes with important roles in body clock regulation.

Since discovering the mPer2 mutation in the Utah family, Fu and Ptacek have found about a dozen other mutations that also appear to cause "advanced sleep phase syndrome," shifting people's schedules earlier. The mutation that caused the elderly Utah woman’s symptoms has only been found in her family, Fu said, but the general syndrome affects about 1 percent of the population, according to the American Sleep Association.

Research with mice and flies has leapt forward as well, clarifying how genes and environmental signals like light control the circadian rhythm through complex cellular mechanisms.

The clock mechanism sets the pace for the rest of our bodies, controlling everything from sleep cycles to how we metabolize nutrients. Circadian rhythm disruptions are linked to health problems such as obesity, diabetes and certain types of cancer, said Paul Hardin, a molecular geneticist at Texas A&M University, who worked with Rosbash on the Nobel Prize-winning fruit fly research. The rhythms even influence how drugs are metabolized, which is why some blood pressure and cholesterol drugs work best when taken at particular times of day.

Drugs to reset the clock

Several research teams are working to develop drugs that target the body's clock mechanism directly, including the group at Thomas Burris's lab at Saint Louis University and researchers with Reset Therapeutics, a small San Francisco-based pharmaceutical company. It's easy to see how such drugs could help people whose rhythms are thrown off by jet lag or shift work, said Fu. But there could be many less obvious applications as well. For example, she said, cancer patients could take a pill before chemotherapy appointments, ensuring that their bodies are at the right stage to get as much as possible from the treatment.

Other drugs could restore the natural highs and lows of a person's daily metabolic cycles, which tend to get flattened out in diseases like diabetes, said Ross Bersot, CEO of Reset Therapeutics. Bersot said his company currently has such a drug in phase 1 clinical trials.

For now, doctors have limited ability to control the circadian rhythm, so people with mutations in key clock-controlling genes must learn to live with their conditions. Nevertheless, said Fu, the Utah woman was delighted to finally understand her early bird habits.

"All her life, she went to doctors, and they all told her that it was all in her head," said Fu. "She knew there was a problem, and we proved it."