Blowflies serve as natural sampling instruments to learn what is pooping and dying in an area.
Image 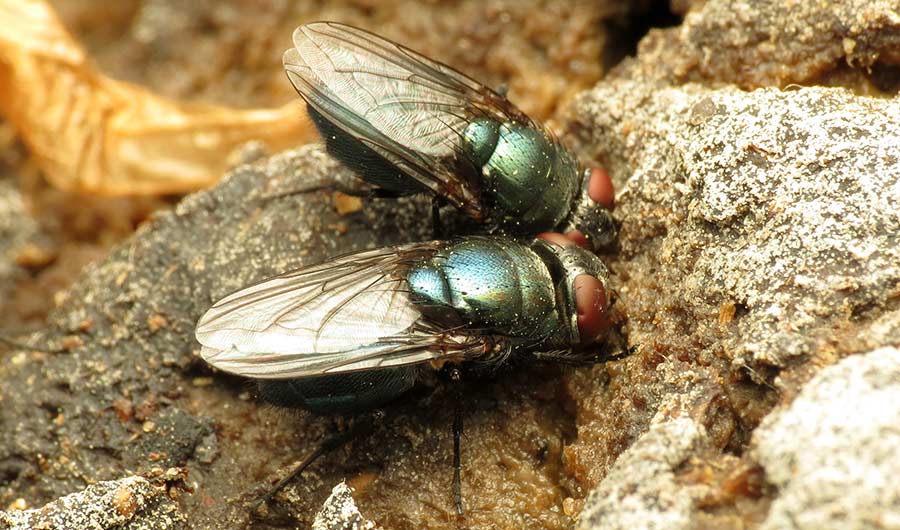 (Inside Science) -- To get genetic samples from wildlife, researchers could embark on a painstaking search for feces and carrion. Or they could open a container full of rotten meat, and let the samples come to them.

"We're calling these flies our environmental drones," said Christine Picard, a molecular biologist at Indiana University Purdue University Indianapolis, who is developing the method. "They're going out there, they're doing the sampling of the environment, and then we can call them in."

Blowflies start their lives as maggots in animal carcasses. They spend a few days gorging, then crawl away to pupate into their adult forms. The adults use scent to find rotting flesh -- or feces, which they also eat. However, the females only lay eggs on carcasses.

Picard and graduate student Charity Owings first set out to study the flies, but they soon realized the flies' gut contents were a gold mine of data about the surrounding world. To explore the potential of those data, they collected thousands of flies from five parks in Indianapolis over three years, and spent several days collecting flies in Yellowstone National Park and Great Smoky Mountains National Park.

With the help of collaborators, they identified DNA from the flies' last meals and also screened for chemicals found in feces. If fecal chemicals were present, it indicated the fly had been eating poop; if they were absent, it suggested the fly might have been eating carrion.

The first thing that jumped out was the amount of human DNA in the flies' guts. In Indianapolis, 34 percent of the flies analyzed had been eating human waste or tissue. In Yellowstone, it was 14 percent, while in the Great Smoky Mountains, it was 53 percent.

Picard assumes the human DNA came from feces, not corpses, even though some of the samples had no detectable fecal chemicals. The researchers have not yet determined how long those chemicals last in a fly's guts, so if fecal chemicals break down faster than DNA, older poop meals would be indistinguishable from carrion. Flies are likely finding much of the human feces in port-a-potties, said Picard.

Aside from human feces, the flies had been eating largely what you'd expect: lots of dog poop in urban areas, plus the feces and carcasses of wild animals such as coyotes and raccoons.

One Indianapolis fly had been eating tiger feces, a startling finding until you realize there was a zoo two miles away. Another surprise was guinea pigs in the Great Smoky Mountains. There are no wild guinea pig populations in the U.S., said Picard, although people do sometimes dump pet guinea pigs in the forest thinking they'll survive. (They don't.)

The blowfly analysis seemed to give an impressively complete picture of the mammals in an area. The state of Indiana hosts 21 wild mammal species, and the researchers detected more than half of them just from flies in its largest city. They have already identified 13 species from Yellowstone, even though they were only there for three days and have only analyzed 30 percent of the flies they collected there.

The researchers are also working to analyze stable isotopes in the flies' own flesh, which will give clues about the type of carcasses they developed on. Picard presented the research Tuesday at the Ecological Society of America meeting in New Orleans.

"I think it is a convenient and novel way to assess the biodiversity in a natural environment," said Feng-Hsun Chang, an ecologist at the University of Michigan in Ann Arbor, who attended Picard's talk.

But, noted Chang, before ecologists can really use the method, they will need to learn more about the flies' food preferences. If blowflies are partial to fox carcasses, for instance, researchers must take that preference into account to avoid over-estimating the number of dead foxes.

The findings already suggest one possible bias: All the species detected in the flies' guts were mammals. That's surprising, said Picard, because blowflies are known to feed on birds and fish as well.

"Any sampling method has bias," said Peter Manning, an ecologist at Senckenberg Biodiversity and Climate Research Centre in Frankfurt, Germany, who also attended Picard's talk. "It's about understanding the bias and correcting for it."

If the biases can be determined, blowflies may offer several advantages as a survey method, said Picard. Humans have a hard time spotting animals in the wild, especially species that like to hide, but no rotting corpse can hide from a blowfly's sense of smell. Moreover, the flies offer a snapshot of a broad swath of the ecosystem. Existing methods usually focus on particular species, since it is too much work to try to count everything at once, said Manning. Even with camera traps, which take photos when they detect an animal's motion, researchers must place the camera based on where they believe a given creature is likely to visit.

And the DNA data opens up a world of additional possibilities. For example, researchers working to conserve endangered rhinos could learn not only how many rhinos live in a park, but how the rhinos are related to each other and whether or not they're inbred.

No matter how useful blowflies become, some people may still regard them with disgust. But Picard doesn't see them that way.

"They're metallic green, metallic blue. Some of them have these bright red cheeks," she said. "They're beautiful flies."