A Gelatinous Drifter May Get Ahead By Eating Its Babies

When times get tough, an invasive comb jelly appears to make the strange evolutionary choice to cannibalize its young.
Image 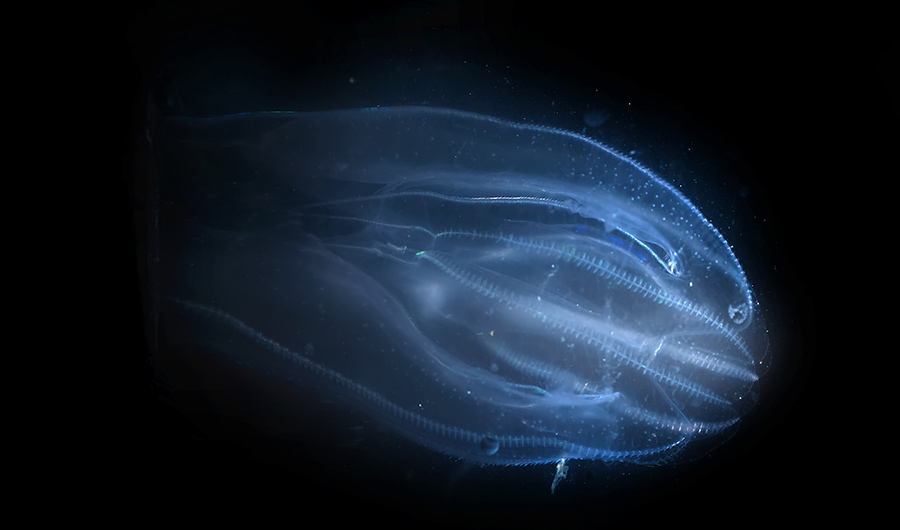 (Inside Science) -- An animal made of 95% water that has roamed the Earth's waters largely unchanged for about 500 million years is an odd candidate for changing the world and crashing ecosystems. Yet it has: The comb jelly has expanded from North and South American into European waters and this has spelled doom for many local species, as they indiscriminately eat both zooplankton, the food of commercially important fish, and eggs and larvae of those same fish species.

Scientists were curious about how these jellies survived in cold, nutrient-deprived European waters for so long. One of these scientists was Jamileh Javidpour, who was monitoring the arrival of the invading comb jellies while working on her doctorate at the University of Kiel in Germany, on the Baltic Sea. Scooping a net into the cold waters outside her research building every week, she began finding the jellies in 2006. And by 2008, she found something else under the microscope: comb jelly larvae in the stomach of adult comb jellies. Were the animals purposely eating their young? Or was it just a byproduct of their indiscriminate feeding, vacuuming up all the resources around them?

Now, there is more evidence. In a paper published today in the journal Communications Biology, Javidpour (now at the University of Southern Denmark) and colleagues say they have evidence of cannibalism as a way for jellies to expand their range into nutrient-deprived waters, by using their own young as a store of resources.

"If cannibalism exists in this group, it means that we can track it up the evolutionary tree to the higher animals," said Javidpour. That insight, she said, might also help answer the question of how diversity developed on Earth.

Cannibalism has been observed in more than 1,500 species, from fish to humans -- usually under specific, nutritionally challenging conditions. Comb jellies are thought to be close to the base of the tree of life, so a finding that they eat their young could have implications for many parts of biology. (Comb jellies are not jellyfish: They have collections of giant cilia running up and down their bodies that act as oars, propelling them through the water.)

The researchers used nets to collect comb jellies daily during a typical late summer bloom in August and September. It's a strange strategy going into winter, but common for comb jellies. They counted the abundance of larvae and adults during those months, and found that the juveniles' population collapsed after the adults' food was depleted, but before the juvenile's own source of food was gone. Years later, they did laboratory experiments with feeding and geochemical tracers to confirm that adults were indeed eating larvae.

It's more advantageous for comb jellies to invest in reproduction than in growing larger when prey is available, said Thomas Larsen, a study co-author and biochemist at the Max Planck Institute for the Science of Human History. The variety of sizes of the resulting population of jellies allows them to capture different-sized prey. "They vacuum clean the sea of anything nutritious."

But in late summer, as the juveniles are also increasing biomass, they also become a handy nutrient resource when the adults have run out of snacks in the ocean -- providing the adults enough energy to last through three months of cold water. Eating the young gives them a tiny extra boost of size that could mean the difference between survival and death in the winter. "They don't depend on reproduction to survive because adults are surviving," Larsen added.

Not all jelly experts agree. Steve Haddock, a marine biologist at the Monterey Bay Aquarium Research Institute in California, said there are many reasons why cannibalism would not be sustainable, and the idea that larvae eat up resources to pass along to their parents doesn't really hold up. "If the parents ate that same prey item, they would get 10 times the return on investment," he said. "I haven't seen evidence that this is a general pattern for ctenophores at large, nor that the larval ingestion is a strategy rather than incidental."

George Matsumoto, a comb jelly researcher also at the Monterey Bay Aquarium Research Institute, said he has rarely observed cannibalism in comb jellies, and it doesn't seem like the best strategy for existence. "Shrinking seems more common as a mechanism to cope with low food availability, and comb jellies are pretty good at this," he said.

Kenneth Halanych, a zoologist at Auburn University in Alabama, who has studied the place of comb jellies in the evolutionary tree of life, says the research highlights the importance of studying the entire life cycle to understand an organism's place in the ecosystem. "Many species also undergo boom and bust cycles. Some are more discriminant feeders and some will eat anything that fits in their mouth," he said. "I think the key issue is looking at species that experience a prolonged season where food is scarce."

This new knowledge may allow conservation agencies to battle against invasive species in new ways. Invasive comb jellies can have irrevocable and permanent impacts on an ecosystem, said Halanych -- adding that this is arguably the most significant invasive species, leaving a swath of destruction in its wake. Its voracious eating has decimated commercial fisheries by feeding on fish eggs and larvae, effectively preventing the growth of the next generation of fish.

Larsen said he admires the jellies -- not for their cannibalism but for their ability to survive. "Humans may have dominion of the earth, but yet we are not terribly resilient as a species -- whereas these spineless, brainless, gelatinous creatures that haven't evolved are so ingenious about adapting to changing environments," he said. "It's striking they have survived big meteors, a freezing planet, a hot planet -- it really speaks to their resilience."