Getting Ready for the 2018 Nobel Prizes

Beginning early Monday morning, Inside Science will cover the discoveries behind the three most anticipated science prizes of the year.
Image 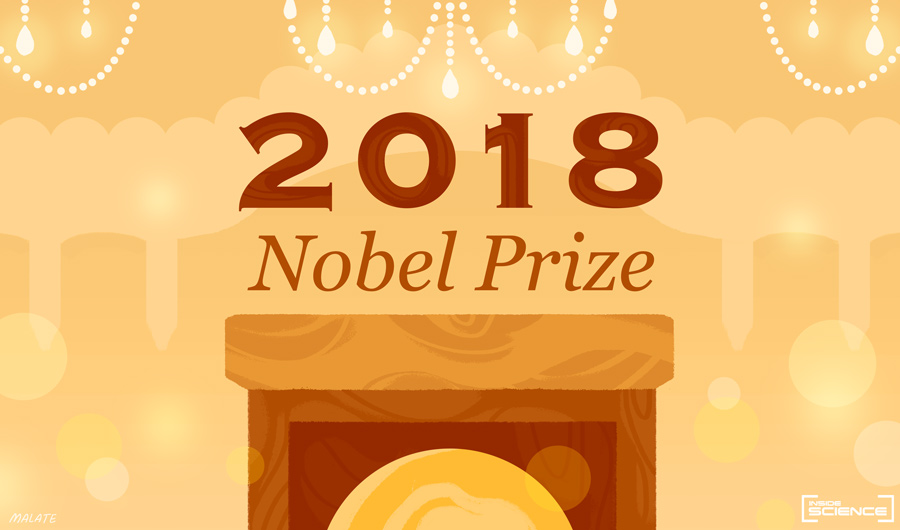 (Inside Science) -- It's almost time to announce the winners of the 2018 Nobel Prizes in Physiology or Medicine, Physics, and Chemistry, and the excitement and speculation are building. On Oct. 1, Inside Science will distribute the first of several news stories about this year's science-related Nobel Prizes. We will publish stories summarizing the science of each prize soon after each announcement, followed by additional stories related to the prizes throughout the week. We've compiled all of our Nobel Prize-related coverage here.

And we've already posted two related stories. In Perovski-what? Nine Nobel Prize Predictions, our staff breaks down three of the top contenders for each prize, from the discovery of the microbiome's importance to health to innovations that made it possible to stop light in its tracks and more.

Here's when the prizes will be announced:

Monday, Oct. 1: The Nobel Prize in Physiology or Medicine

The festivities begin before dawn if you're in the U.S. You can livestream the announcements from Sweden at nobelprize.org.

In addition to recognition, the new Nobel Laureates will be awarded a Nobel medal and money. Last year, the prize was 9 million Swedish Krona ($1 million), which was split among as many as three winners for each prize. This guideline often causes controversy, since modern science is very much a collaborative endeavor that relies on the contributions of many people. The three-person-per-prize limit is particularly prominent in the case of CRISPR, which has been the subject of a patent lawsuit.

Inside Science staff highlighted three top contenders for each prize in this story:

Another approach to predictions

When it comes to making predictions about the winners, you could use your gut, or attempt to develop objective ways to identify the most influential and award-worthy science. Clarivate Analytics takes the latter approach, analyzing academic citations to issue a list of three different discoveries that could be recognized with each prize. They call the scientists behind these discoveries "citation laureates."

For physiology or medicine, this year's list highlights developments in bioinformatics, the discovery of receptors for chemical messengers in the brain, and the discovery of a signaling molecule that regulates blood vessel growth. For physics, they highlight the observation of the spin Hall effect in semiconductors, cosmological research that has added to the understanding of galaxies and dark matter, and discoveries related to the materials science behind multiple carbon-based materials. For chemistry, they predict that the Nobel committee will recognize "contributions to catalytic reactions for organic synthesis," discoveries in structural crystallography, or discoveries related to how free radicals influence the synthesis and repair of DNA.

Here are Inside Science's top stories related to possible winners:

The Microbiome and Nutrition

The Microbiome of Crops

Advances in Solar Power -- including Perovskites

This week, our friends at Physics Today have produced several stories related to the physical movements of Nobel-winning physicists. For example, they relate the tale of hundreds of physicists and academics who fled Nazi Germany, the unlikely country where dozens settled, and the tragic story of Hans Hellmann, a prominent quantum chemist from Germany who fled the country in the 1930s only to later be executed in the Soviet Union. The Physics Today team has also produced an interactive graphic allowing visitors to follow physics laureates through the major movements of their lives and careers.

For the latest on this year's prizes, we hope you’ll visit our site on Monday morning and throughout the week. Our coverage begins bright and early!