The so-called Great Whirl off the coast of Somalia is larger and lasts longer than scientists thought.
Image 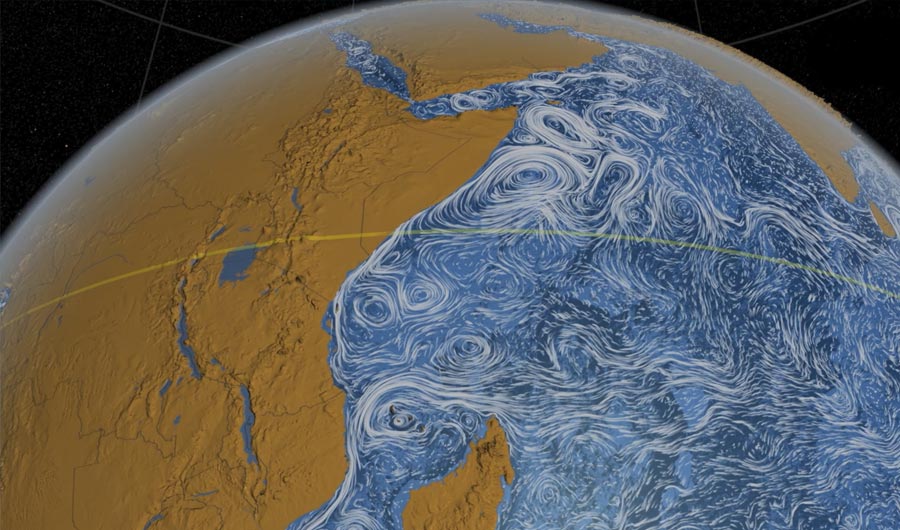 (Inside Science) -- A giant whirlpool off the east coast of Africa is even bigger than previously thought, on average larger than the state of Colorado, satellite data now reveals.

The Great Whirl is a clockwise-spinning vortex that starts to form every April off the coast of Somalia, when winds blowing across the Indian Ocean change direction from west to east. First described in 1866, the strong waves and intense currents of the whirl have long made sailors wary. At its peak, the Great Whirl can reach as broad as 500 kilometers, making it wider than the Grand Canyon is long, and its currents can go farther than a kilometer deep.

Piracy off the Somali coast has long hampered research into the Great Whirl. To shed light on its behavior, researchers with the U.S. Naval Research Laboratory at Stennis Space Center in Mississippi analyzed satellite measurements of sea levels from 1993 to 2015. They discovered the whirl covered an area roughly 72% larger than previous estimates, averaging 275,000 square kilometers in size over 23 years.

The scientists also found the Great Whirl was highly variable in terms of when it forms and how long it lasts. However, on average, it lasts for 198 days, considerably longer than previous estimates of 166 and 140 days. The huge amount of momentum it accumulates keeps it spinning well past the official end of monsoon season in September, persisting well into November, and there were three years when it lasted into the subsequent year. In 1997, it lasted 256 days.

The Great Whirl is closely linked with the monsoon that drives India's rainy season, and the vitality of India's $2 trillion agricultural economy "is dependent on rainfall from the monsoon season," said study lead author Bryce Melzer. The researchers suggested further research into these swirling waters might one day help with the notoriously difficult task of forecasting how much rain might fall during India's monsoons. They noted their work could also help track other whirlpools, such as ones in the Gulf of Mexico that can influence oil drilling there.

The scientists detailed their findings online April 30 in the journal Geophysical Research Letters.