(Inside Science) -- This morning, scientists publicly announced the first observation of a cosmic event with both gravitational waves and light.

The discovery marks the capstone of a huge couple of weeks for the celebrated ripples in space-time. First, on Sept. 27, a three-pronged gravitational wave detection was announced jointly by the LIGO and Virgo collaborations, enabling astronomers to triangulate the signal’s source for the first time. Then on Oct. 4, Rainer Weiss, Barry Barish and Kip Thorne were awarded the 2017 Nobel Prize in physics for their work making gravitational wave observation possible.

Today’s announcement adds a new dimension of excitement. The new observations, of merging neutron stars, are “more complete than for any previous event in astronomical history,” said Caltech astronomer Gregg Hallinan in a press statement.

A new page in astronomy

All four previously detected gravitational waves came from black hole mergers, which emit no light, despite the enormous amount of energy they expel. For neutron star mergers, it’s a different story. The latest confirmed event, now known as GW170817, marked the death dance of a pair of neutron stars about 130 million light years away from Earth. The two spiraled toward each other before colliding in a spray of light. 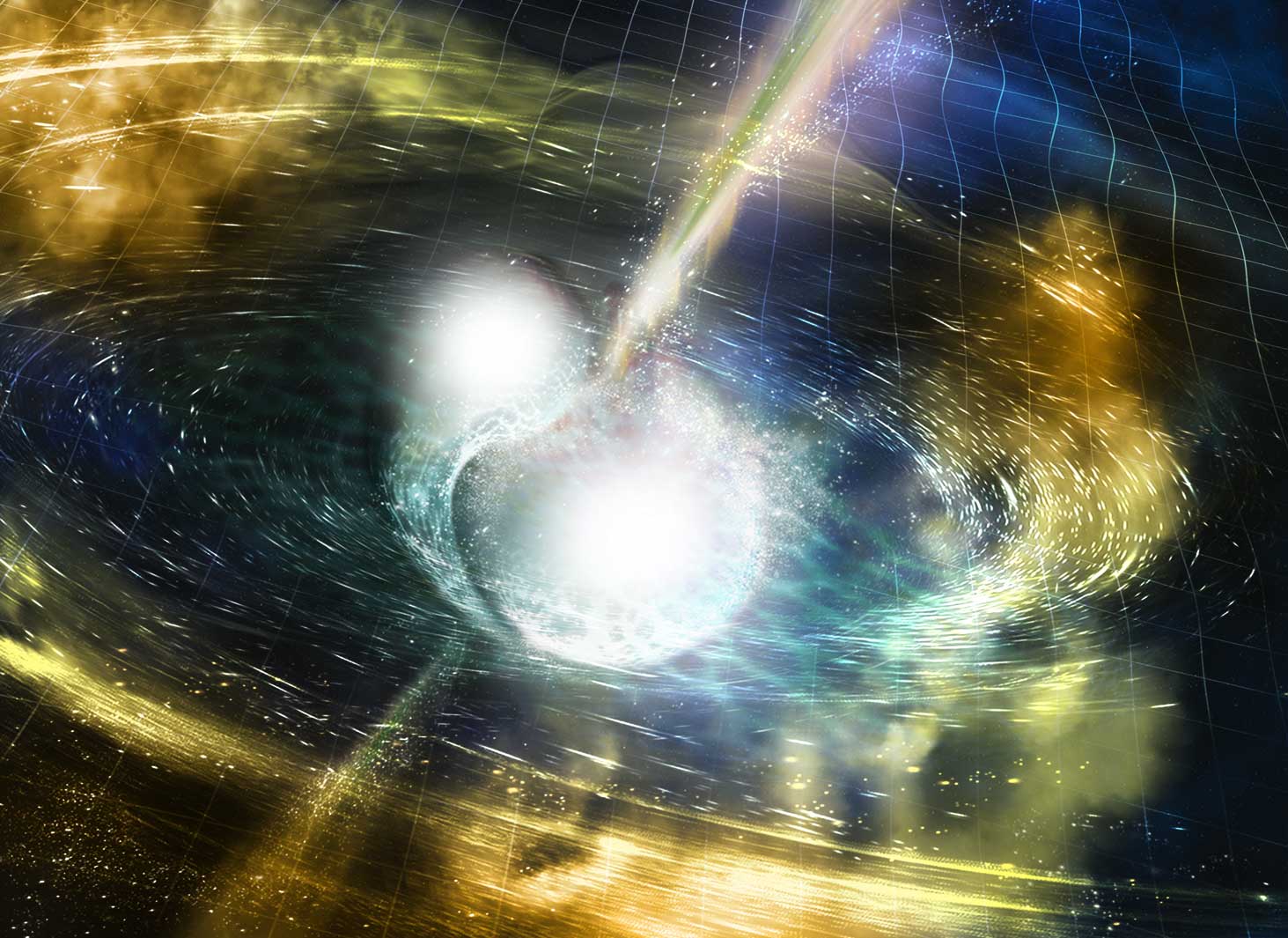 A simulated image of two colliding neutron stars depicting the light and debris expelled by the collision.

What Are Neutron Stars?

Neutron stars are the densest objects in our universe besides black holes -- a teaspoon of neutron star material contains a mass of around a billion tons. They are formed when giant stars at least ten times more massive than our sun collapse in a spectacular supernova. The collapse is so violent that protons and electrons melt into each other to form neutrons -- hence, the name, neutron star.

On Aug. 17, the detectors at LIGO and Virgo picked up a faint signal from a passing gravitational wave. Shortly afterwards, NASA's Fermi space telescope observed a short burst of gamma rays. After a quick analysis of the incoming gravitational waves revealed the source was likely a collision of neutron stars, the news was swiftly relayed to some 70 observatories around the world. Astronomers at the observatories pointed their telescopes toward the specified spot in the southern sky, and waited for the light show expected to arrive over the coming days and even weeks, as the succession of photons of different wavelengths produced over the course of the collision arrived at Earth.

“It was the most exciting day of my life,” said Mansi Kasliwal, a Caltech astrophysicist, and the principal investigator for GROWTH, the global relay network responsible for alerting and coordinating observatories around the world for an event like this one.

The detection of this event with both gravitational waves and light is an example of what scientists call multi-messenger astronomy.

“Multi-messenger events are really the holy grail, with respect to understanding issues in astrophysics,” said Mike Guidry, an astrophysicist from the University of Tennessee in Knoxville.

“We thought that multi-messenger events were possible, but my guess was that it would take a while for us to get there. It looks like I stand corrected,” said Guidry. He is currently authoring a textbook on general relativity and noted that the news might force at least a partial rewrite.

But the discovery is much more than just the first ever multi-messenger event --  GW170817 has also shed light on the process that created almost one quarter of all the elements in our universe.

The birth of gold

One of the active debates among astronomers is the origin of gold. Astrophysicists believe that about half of all the elements heavier than iron, including gold, silver, platinum and uranium, are created by a mechanism known as the r-process. Short for rapid neutron capture process, the r-process requires an abundant supply of neutrons.

For decades, astronomers have theorized about astronomical events that would produce conditions ripe for the r-process to occur. The two prevailing contenders require neutron stars. One theory suggests that r-processes can occur during a supernova explosion when a neutron star is first formed, while another theory claims that the process can also occur when two neutron stars smash into each other, casting fragments of heavy elements such as gold, silver and uranium across the universe. According to Kasliwal, supernovas are relatively common and easy to observe relative to neutron star mergers, but almost none of the observed supernova fit with the first theory. Without a way to observe neutron star mergers, the astrophysicists were stuck.

But now, with the first ever detected neutron star merger, there are now observations that support the second theory. Astronomers have now seen “unequivocal evidence of a cosmic mine that is forging about 10,000 earth-masses of heavy elements, such as gold, platinum, and neodymium," said Kasliwal in a press release.

Finding evidence for the origins of gold is just one exciting aspect of the new observations. In addition to being the birth place of gold, neutron stars, together with black holes, are also the graves of heavy stars. That’s because for stars much more massive than our sun, their final fate is to become neutron stars or black holes. The GW170817 observation, which sheds light on many neutron star properties, will revolutionize the way astrophysicists observe and study stellar evolution, according to Guidry.

“This is at least as important as the original announcement of the discovery of gravitational waves,” said Guidry.