Researchers designed pasta that is stored flat and morphs into shape while cooking.
Image 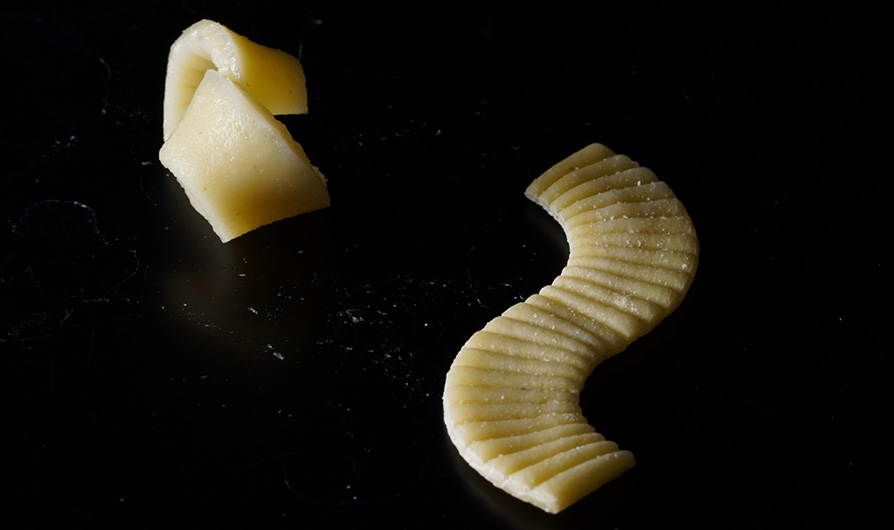 (Inside Science) -- Pasta is beloved for its diversity of shapes, from tubes of penne to spirals of fusilli. However, these bulky 3D structures often require large packages to store. Now scientists have developed flat pasta that can morph into familiar shapes when cooked, which could make them easier to ship not just on Earth, but in space.

The researchers drew inspiration from the way flat-packed items such as furniture made storage and shipping easier. They sought to make food that could package flat for slimmer containers, "since food packaging is one of the biggest sources of waste in the world," said study senior author Lining Yao, director of Carnegie Mellon University's Morphing Matter Lab in Pittsburgh.

Traditional pasta already changes shape when cooked, expanding and softening when boiled. In the new study, Yao and her colleagues harnessed these properties to create their morphing pasta.

The researchers stamped patterns of tiny grooves into conventional flat pasta dough made solely of semolina flour and water. The grooves increased how long it took boiling water to cause those areas to swell. By controlling the angle, width, depth and spacing of the grooves, they could make flat pasta fold into tubes, spirals, twists, waves and boxlike shapes when cooked.

The scientists noted they could easily generate these grooves using inexpensive manufacturing techniques such as stamping, etching or molding. And when the morphing pasta was taken on a hiking trip, study lead author Ye Tao, now at Zhejiang University in Hangzhou, China, found it took up less room in her pack, did not break during hiking, cooked successfully on a portable camp stove, and looked, felt and tasted like traditional pasta.

The researchers noted flat-packed pasta could be more environmentally friendly. In Italy, about 1% of greenhouse gas emissions come from cooking pasta, according to the researchers, and flat pasta may cook faster than tubular pasta, reducing pasta's carbon footprint. Flat pasta could also prove simpler to manufacture, reducing costs and improving production efficiency.

This morphing technique could likely control the shape of any swellable material, and not just edible foods, Yao said. She and her colleagues showed they could morph silicone rubber sheets the same way, suggesting potential uses in soft robots and biomedical devices, she noted.

The scientists detailed their findings online on May 5 in the journal Science Advances.