Super-sized pumpkins push nature and science to the limit.
Image 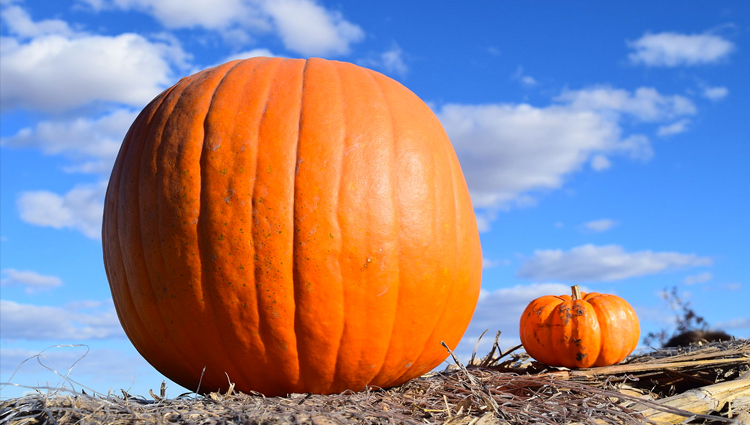 WASHINGTON (ISNS) -- A new world record was set this month for the heaviest pumpkin ever grown. Taking first place at the Stillwater Harvest Fest in Minnesota -- and beating last year's record by 85 pounds -- this Sasquatch of squashes weighed in at just over 1,810 pounds.

To pumpkin enthusiasts like Chris Stevens of Wisconsin, a contractor who grew this record-breaker, the giant pumpkin is both a work of art and the product of an ever-evolving amateur science.

"There's a tremendous amount of tender loving care that goes into this," said Tim Beeman, who coordinated the 2010 Safeway World Championship Pumpkin Weigh-Off in California's Half Moon Bay. "These guys are like mad scientists."

These super-sized pumpkins have also attracted the attention of university scientists, who are helping growers to better understand how their pumpkins get so large and how to make them even larger.

Giant pumpkins on display in festivals across the country trace their ancestry back to Atlantic Giant pumpkin seeds first patented in 1979 by Howard Dill, who set the world record in 1980 with a 459-pounder. Today, giant pumpkins regularly weigh more than a thousand pounds and are thought to thrive in a "golden zone" that stretches across southern Canada and the northern half of the United States.

Loading one of these monsters into a pickup truck for a trip to the local fair has become a delicate dance of straps, pulleys, and prayers. After the judging, the pumpkins typically find homes on front porches, in casinos or in kitchens that use them to feed underserved populations. Some are even carved into boats.

The increasing size of giant pumpkins over time is partially due to genetic changes brought on by selective culturing. For decades, pumpkin growers have steadily pushed these fruits by swapping seeds and using other traditional breeding techniques that have been around for thousands of years.

"These are just ordinary people doing this who don't understand genetics," said Jules Janick, a horticulturalist at Purdue University in West Lafayette, Ind. "It's the way that a lot of crops like corn were originally developed."

Growers cross the biggest, most desirable pumpkins -- which produce seeds the size of a peach pit that can fetch $850 each, according to Janick -- with each other and let nature improve them over several generations. This selective breeding is called artificial selection, a term coined by Charles Darwin, and is similar to processes that occur in nature, except in this case the growers are selecting the "fittest" individuals -- the larger pumpkins -- to breed in order to pass on the more desirable genes to help create even larger pumpkins.

"It's very similar to horse racing, where breeders cross the fastest horses.  You can see the effect of this breeding if you look at the records," Janick said.

Giant pumpkins grow about a hundred times faster than a typical pumpkin. They can gain an average of 20-40 pounds in a single day, and as much as 60 pounds a day under the right conditions.

For engineer David Hu, an assistant professor at the Georgia Institute of Technology in Atlanta who studies how the shells of plants and animals get their shape and size, these fruits are a biological puzzle. Small pumpkins are roughly spherical. But giant pumpkins tend to be irregular, lopsided, and as much as twice as long as they are tall.

"They look like ugly green peppers," said Hu, commenting on the shape, not the color, which remains orange.

To explore why giant pumpkins change shape, Hu built a computer model. A giant pumpkin is made of billions upon billions of cells, each pulled and pushed by forces under the weight of its neighbors. To simulate these forces, Hu represented clumps of these cells as points connected by springs.

The simulation suggested that the shape of the pumpkin is not due only to gravity pushing down, but to how the internal forces affect the growth of the pumpkin. The sides of the pumpkin seem to feel the most force which, Hu believes, causes cells in these areas to divide faster and the pumpkin to grow outwards.

However, other scientists cautioned that this model is limited. Because giant pumpkins are difficult to grow and work with, Hu smashed ordinary-sized store-bought pumpkins to test their strength and fed the data into the model. But the strength of these small pumpkins might be different than that of giant pumpkins. The model also lacks pre-stresses, forces caused not due to the weight of the pumpkin, but to anatomical features built into its structure that might resist gravity.

Still, the general conclusion that some cells might be dividing faster than others is "not unexpected" said biomedical engineer Larry Taber, a professor at Washington University in St. Louis, Mo.

"The location of the greatest stresses (near the bottom) is expected, as that part must support more weight than regions nearer the top (like pressure increasing with depth under water)," Taber said.

Hu offered a lesson for any would-be mega-pumpkin growers.

"There cannot be any sudden changes in weight," Hu said. "The pumpkin has to have time to redistribute the weight as it grows."

That's a lesson that Don Young, a prize-winning giant pumpkin grower in Iowa, has learned through years of experimentation. He knows that rain and other factors in the environment can play a huge role in shaping how fast the pumpkin grows -- and that steadiness is the key.

To prepare his pumpkins for a coming storm, which could cause them to swell and burst, he gradually increases how much he waters them, slowly ramping up their growth rate.

"It's like competing in a NASCAR race," said Young. "There's a fine line between running the pumpkins so hard that they blow up and getting them to the finish line in one piece."

During the giant pumpkin growing season, which starts around April and lasts as long as 160 days, or until the last frost, Young also collects soil and pumpkin samples every week and sends them off to a lab for analysis. He wants to know which nutrients the pumpkin uses during different parts of the season.

Young and other growers, who spend as much as 40 hours a week caring for their pumpkins, are also starting to use symbiotic fungus to enrich the uptake of nutrients from the soil.

The race is on to grow a pumpkin that weighs more than a ton.

"The future is thicker, longer, and heavier," said Young. "We'll see a pumpkin weighing more than 2,000 pounds in the next couple of years."

No one can predict just how big the world's biggest pie-fillers can get. Some growers think that the pumpkin's size is limited by its genetics and others, by the number of days in the growing season.

One thing is clear: to get these gigantic gourds to judging booths across the country, everyone's going to need a bigger truck.