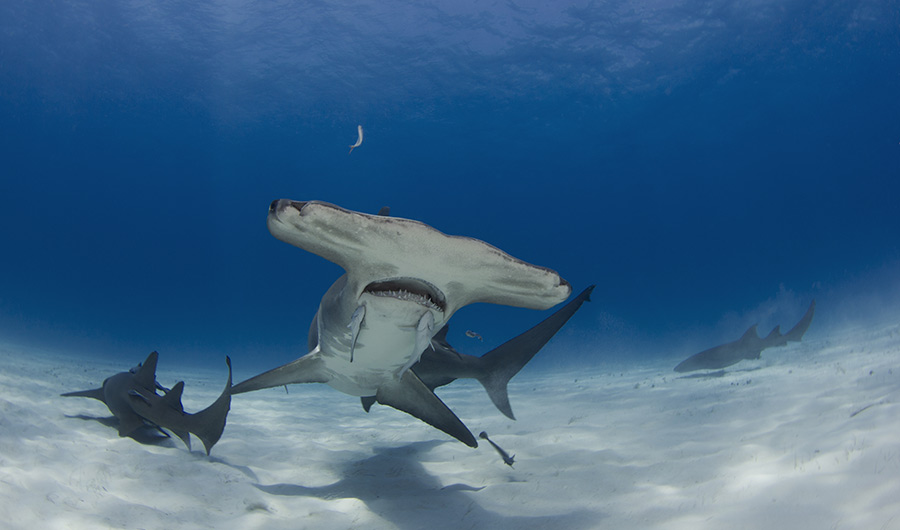 (Inside Science) -- The fear of a larger set of teeth may drive blacktip sharks closer to beaches, where they have more chance of coming across humans.

For the first time, drones have captured video footage of giant hammerhead sharks chasing individuals, and sometimes groups, of blacktip sharks into shallow water near the beaches of southeast Florida.

“These hammerheads come rushing in to grab the blacktips, but the blacktips scooter into the shallows,” said Stephen Kajiura, a marine biologist at Florida Atlantic University, who conducted the research with then-undergraduate student Melanie Doan. The findings were recently published in the Journal of Fish Biology.

Kajiura has been studying blacktip sharks for about a decade now. The blacktips aggregate in the thousands off the southeast coast of Florida during winter, and the researchers have been tracking their summer migrations northward using GPS tags. They’ve also conducted drone and airplane video surveys of the aggregation during summer. The team wondered why the blacktips often stayed so close to the shore.

Researchers had long suspected that great hammerheads, which can measure upwards of 12 feet long, preyed on blacktips, which are typically half their length. But only last year did Kajiura and his colleagues capture one of these events on camera from a boat for the first time. A hammerhead captured a blacktip in its mouth, only to be chased off its prey by an even bigger hammerhead, which finished off the blacktip.

“The hammerheads basically bottom out -- they’re so big they can’t get any shallower,” Kajiura said. “The blacktips are basically refuging in the shallows.”

Michael Heithaus, a shark researcher at Florida International University, who was not involved in Kajiura’s study, said the research is "really cool." His research in Australia has shown that tiger sharks can also affect whole ecosystems by changing turtle and manatee behavior.

A refuge for sharks doesn’t translate well to a safe place for humans. Blacktip sharks are likely responsible for more bites on humans than any other shark species, Kajiura said. Researchers believe this is usually a result of the shark getting confused. For example, bites don’t happen much in the researchers’ study area in West Palm Beach where the water is pretty clear. But in murkier waters to the north, they may confuse human hands with fish.

Researchers aren’t sure yet whether hammerheads in those murky northern waters chase blacktips into shallows the way they do in the south. Moreover, blacktips likely also come to shallow water in search of food, even when they're not being chased. Hammerheads don’t usually attack humans themselves, due in part to awkwardly shaped heads better suited to attacking creatures beneath them in the water rather than above them where humans would normally be. But in some cases, hammerheads may be indirectly contributing to more shark bites, Kajiura said.

Kajiura would like to do future research tracking hammerheads to see if they follow their blacktip prey during their yearly migrations northward. He also speculates that with oceans warming due to climate change, blacktips may not migrate as far south in the future, sticking to the murkier, more accident-prone waters.