Astrophysicists devised a new theory that may explain the formation of black holes with masses exceeding 50 times that of our own sun. 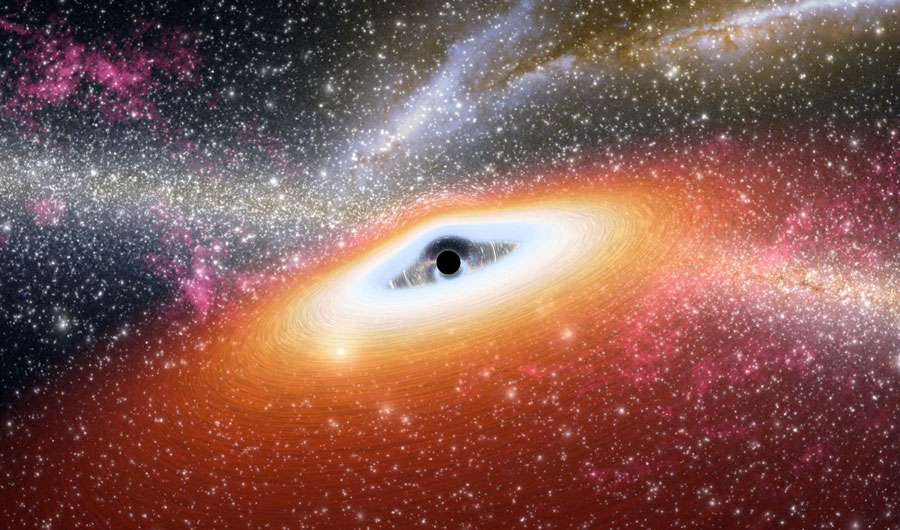 (Inside Science) -- Small black holes may be crashing into each other while orbiting the supermassive black hole at their galaxy's center, according to a new theory proposed by astrophysicists.

Similar to highway pileups that can happen when lots of cars are stuck on a city’s beltway, these cosmic pileups can happen when black holes get stuck in the same general orbit, making the chance of sequential collisions higher than previous models predicted.

In the old model, two separate black holes, each arising from the remnant of a dead star, must find each other while meandering aimlessly in the vast volume of space. Moreover, these so-called stellar black holes rarely possess masses more than a few dozen times that of our sun, so even should two of them find each other, the resulting merger should rarely be larger than 40 times the mass of our sun -- contrary to what astronomers have observed.

In contrast, the new theory explains how merged black holes, once trapped orbiting the galactic center, can easily find more black holes to merge with in a sequential fashion.

It starts when gravitational interactions, friction, and other forces cause objects such as black holes to accumulate into a ring roughly 300 times the radius of the supermassive black hole sitting at the galactic center. After the black holes get stuck on this crowded loop, they slam into each other in a series of collisions, resulting in heavier and heavier mergers.

The new theory can help explain the existence of black hole mergers heavier than 50 solar masses. It can also explain why some black holes spiral in a certain way as they crash into each other, a feature not explained by previous models but observed in the gravitational wave data collected by the LIGO and Virgo collaborations.

The details of this new theory are described in a paper published in the journal Physical Review Letters last month.