Rock core samples may carry marks made by cosmic rays up to billions of years old.
Image 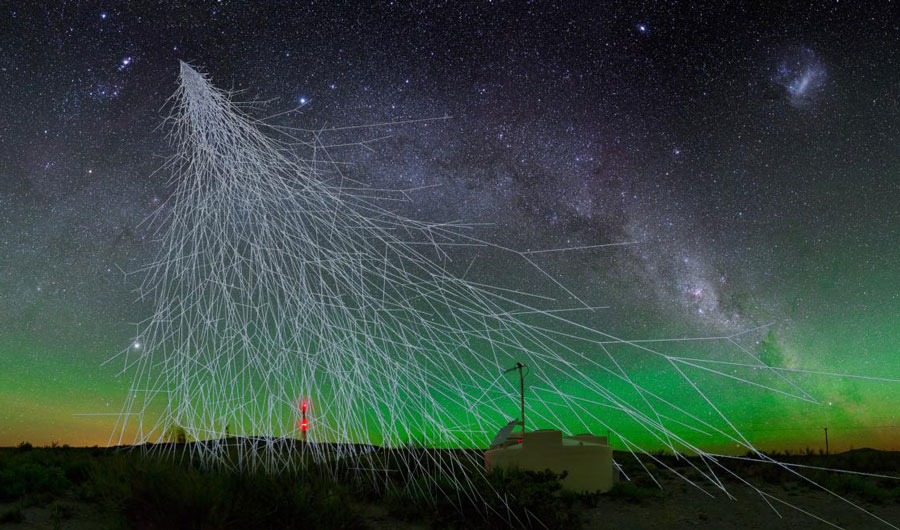 Artist's impression of a cosmic ray and its secondary particles raining down over the Pierre Auger Observatory in Argentina, seen against a starry sky.

(Inside Science) -- Scientists have figured out a way to look into our galactic past and the proposed method is literally groundbreaking: It involves digging up salt crystals from miles underground. A paper describing the approach was recently published in Physical Review Letters.

Digging deep for our galactic past

Typically, astronomers look into the past by staring deep into space and observing light that has taken billions of years to arrive from faraway galaxies and even the Big Bang itself.

But how do we study the history of something that is more nearby -- say, within the Milky Way Galaxy, which is only a hundred thousand light-years across? Or our sun, which is only eight light-minutes away?

"Our sun, for instance, is known to be much less active than similar stars. The typical sun-like star has a variation in radiation output of maybe a percent or so. For the sun, it's closer to a third of a percent," said Paul Evenson, an astrophysicist from the University of Delaware in Newark who was not involved in the latest paper. "So, has our sun always been this quiet magnetically? That would be interesting to know."

Luckily, there is another group of scientists that is used to working with this sort of time scale closer to home -- geologists. Rocks on our planet, up to several billion years old, may carry marks left by cosmic rays over their lifetime, and can be analyzed to reveal our galactic past.

Cosmic rays are high energy particles whizzing through space at near the speed of light, and they pelt our planet constantly. This relentless bombardment creates a cocktail of secondary particles in the atmosphere that rains down onto the ground, and according to the new paper, leaves behind permanent marks in crystals.

Temporary tracks created by ionizing radiations inside a cloud chamber -- an enclosed box with ethanol vapors that help visualize the particles created by cosmic rays whizzing through our planet every day. You can learn how to build one at home here. [Credit: Stephen Curry/CC BY 3.0]

Not all tracks left behind by these secondary particles are useful. For instance, crystals found close to the earth's surface would contain tracks from many different sources, making them difficult to analyze. This is why one may have to dig deep.

Neutrinos are among the particles created when cosmic rays hit our atmosphere. Unlike the other particles, neutrinos are so weakly interactive that they can easily pass through our entire planet without bumping into an atom. This weak interactivity of neutrinos is a double-edged sword. It makes observing neutrinos difficult, because most of them would pass right through the detector, but it also provides a unique way to screen for them -- by looking for them underground, at depths where no other particles can reach.

The new paper suggests that scientists should be able to figure out the intensity of cosmic rays over the past billion years by counting the tracks left by atmospheric neutrinos in deep underground crystals. Researchers could, in theory, determine the age of individual crystals using radioactive dating, then count up the neutrino tracks inside the crystals, and infer from that how the onslaught of cosmic rays has changed over time.

For example, if you have two crystals of roughly the same size, with one showing 200 tracks from 1 billion years ago, and one showing 300 tracks from 1.1 billion years ago, then you would be able to say something happened during the intervening time that increased the flux of cosmic rays reaching the Earth. You would also be able to see any longer-term changes in the average influx of cosmic rays over time.

"The sources of cosmic rays are very much still an open question," said Johnathan Jordan, a physicist from the University of Michigan in Ann Arbor. "Supernova explosions are expected to constitute part of the source of cosmic rays. And then of course, the magnetic field of the sun and the earth also plays a huge role in shaping the way cosmic rays get into our atmosphere."

"There are similar methods [for studying cosmic rays] using tree rings and sediments and maybe ice cores, but their time scales are in the range of a hundred thousand up to a few million years, not billions," said Evenson. Methods that look further back in time could yield data about the history of sun activity that can shed light on the long-term climate fluctuations of our planet.

"There is this joke I often tell my students, maybe too often, which is my recipe for rabbit stew," said Evenson. "The first item in the recipe is: Catch the rabbit."

The lesson, as applied to neutrino tracks, is: First find the crystals. There are existing underground labs or boreholes where researchers might locate samples, Jordan said, provided the scientists have the ability to dig up and analyze them right then and there. "Essentially, you can't bring the sample to the surface and transport it to another lab for analysis, because as soon as you bring it to the surface, it would get spoiled by all sorts of background radiation."

While this may still seem somewhat doable given the number of underground labs that already exist, another matter may further complicate the logistics of the proposed experiment: For the cosmic rays within the energy range relevant to the experiment, latitude-dependent effects due to the Earth's geomagnetic field would have a significant impact.

"So, if you were to look at a sample in Japan compared to, say, somewhere in South America, you might see some very different numbers," said Thomas Gaisser, an astrophysicist also from the University of Delaware. Both Gaisser and Evenson have worked for the IceCube neutrino observatory, which uses detectors buried miles deep in the Antarctic ice to capture brief flashes produced by neutrinos.

To get a good picture of the whole planet, one would ideally need samples from around the world. However, if that can’t be achieved, Jordan said, scientists can still get some idea of the local geomagnetic effects by looking at the shorter "background" tracks made by other particles, at least qualitatively.

According to the paper's estimate, a 100-gram hunk of a one-billion-year-old salt should contain about 60,000 tracks from atmospheric neutrinos. While the number seems large, this translates to only about one track for every 16,667 years.

When combined with other uncertainties such as the dating of the sample, the time resolution is even lower. While some of these uncertainties can be mitigated with larger samples, which would be more difficult to obtain and analyze, some, such as the dating uncertainty, "is going to appear no matter what," said Jordan. However, he added that the method would be useful for seeing changes over tens of millions of years, as our solar system visited different parts of the Milky Way over its 230 million year-long orbit.

"We're at the stage where we're saying, 'here's the physics case for this.' But when it comes to the actual logistics of the experiments, we're not there yet," said Jordan.