One of the things people with Alzheimer's disease understand is music.
Image 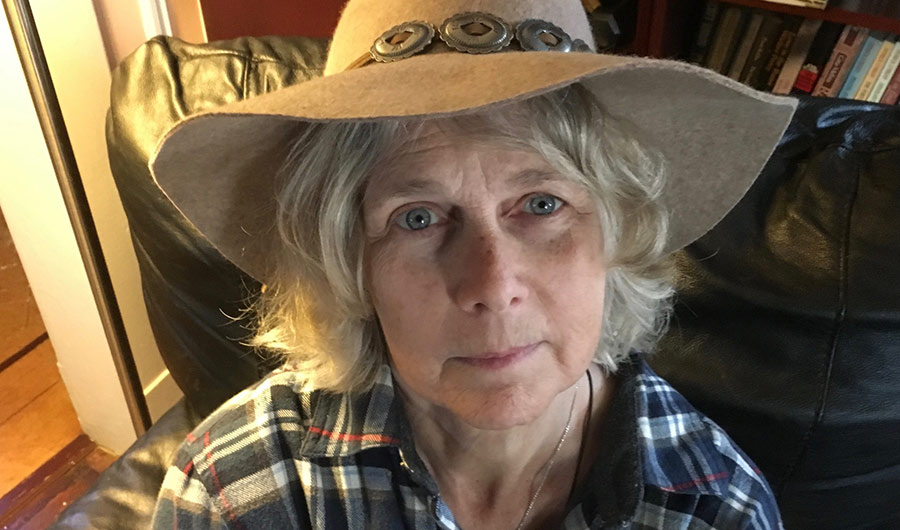 Carol Howard, 69, was diagnosed with Alzheimer's disease six years ago.

(Inside Science) -- The second movement of Ludwig van Beethoven's Seventh Symphony begins with a minor-key rhythm in the cellos. It sounds like a background rhythm, which it becomes when the violins introduce a second, soaring and entirely different melody. One half the Baltimore Symphony is on stage playing one thing; the other half, another. Next to me, my wife, Carol, leans forward and smiles.

Beethoven must have been in a good mood when wrote this, perhaps a bit nostalgic, whimsical. Carol appears to appreciate what he was doing.

That surprises me. Carol understands very little these days. Sixty-nine years old, she is six years into early onset Alzheimer's disease, halfway through what former President Ronald Reagan, who also had Alzheimer's, called "the journey that will lead me into the sunset of my life."

But in this moment, Carol reacts to music fully and appropriately. People with Alzheimer's retain the ability to understand music until the very last moments of life because the part of the brain where music processing resides, scientists have discovered, is the very last to go.

Echoes of Mahler through the mist

One day a few months ago, a music therapist came to my Alzheimer's support group. She said music improves the mood of a person with Alzheimer's and modifies their reaction to the disorder temporarily. They are calmer, less aggressive.

I didn't know there were such people but being a professional skeptic, I checked to see if there was any scientific validity to what she said.

The answer is yes. I am not the only one puzzled, though. There is research, some of it quite dramatic. The relationship is not controversial, but not well understood.

"Whether and how music might be beneficial or therapeutic is a huge, complex, daunting challenge," said Carl Ellenberger, a flutist and neurologist who has written an upcoming book about those questions, "Theme and Variations: Musical Notes by a Neurologist."

This story about Carol's reaction to music began in Amsterdam two years ago. We flew there to hear the Royal Concertgebouw Orchestra play Gustav Mahler's "Resurrection" Symphony, my favorite.

Carol had heard it before, and she seemed to tense up at the opening chords then quickly relaxed when she recognized it. She broke into a broad grin at the climax, which involved an augmented orchestra, a huge chorus and a pipe organ that took up most of the entire end of the great hall.

We walked back to the apartment in the dark through a light mist holding hands. She said she was still in the music. Whatever Mahler was saying she had heard him.

How could that be?

Carol has a graduate degree in cetacean biology, and she once wrote a best-selling book, "Dolphin Chronicles" -- still in print -- about the two Atlantic bottlenose dolphins on which she based her Ph.D. research. In a class I taught in science writing at the University of California, Santa Cruz, she was the best writer—every word considered, every word perfect. 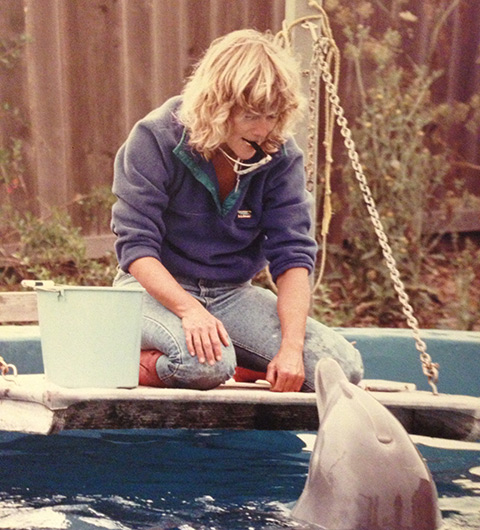 Carol and a dolphin at the Long Marine Lab, University of California, Santa Cruz, around 1990.

We live with music in our lives. Whether classical music in a concert hall or '60s music in the kitchen, she is there enjoying herself, sometimes singing along.

She remembers all the words to most of Simon & Garfunkel's greatest hits. She wept at Leonard Bernstein's "Mass."

Now the amyloid plaques and tangles of Alzheimer's disease are destroying her brain. Her short-term memory can be measured in minutes; she cannot find a Coke in the refrigerator, or even find the refrigerator standing next to her. Sometimes she forgets where the bathrooms are. She can't read because if she is on page eight she has already forgotten page seven. If she starts to speak a sentence, the odds are she will not finish it. She once forgot who I am, and she regularly time-travels from our home in Maryland to her student days back in Santa Cruz.

She cannot remember which side of the car she is supposed to sit in or which is our car, and yet when we are in our kitchen listening to "Bridge Over Troubled Water" she sings along.

The effects of Alzheimer's disease

There are three primary things to remember about music therapy for Alzheimer's and other forms of dementia.

First, no one knows the cause of Alzheimer's. It is not contagious or infectious. There is a known genetic influence. More than 5.5 million Americans have it and the number is growing.

Second, there is no cure or effective treatment. In the early stages, some medicines, particularly Aricept, work for a while before they stop. A person can live 10-15 years, steadily deteriorating despite everyone's best efforts.

Three, music therapy actually improves the mood of people with Alzheimer's, making them feel better, There is even some evidence it helps cognition.

Part of the reason music works in Alzheimer's disease is that it is processed in the basal ganglia, the primitive, reptilian, part of the brain that is resistant to the damage, said Andrew Budson, associate director of the Boston University Alzheimer's Disease Center. Music is processed there, in part, because that's where the brain responds to rhythm and beat.

The basal ganglia survive longer with Alzheimer's because the loss of the episodic memory for such things as what you had for dinner last night or remembering where you parked your car, is associated with a network of memory in the cortex, the most modern part of the brain that deteriorates in the disease. Alzheimer's is more a disease of the cerebral cortex. According to one theory, the basal ganglia doesn't utilize that network, making it relatively stable throughout most of the course of Alzheimer's.

"At the end stage every part of the brain is affected," Budson said.

Music is something of an in-the-moment experience. You don't have to remember more than the few bars that came before.

"Every time you listen to a new piece of music…you will be experiencing it in exactly the same way as a person with Alzheimer's," he said.

Music with lyrics engages both the right and left part of the brain; the left sides listen to the words, the right to the melody. People with Alzheimer's are also language impaired and may be having trouble with lyrics, said Budson, who has written a textbook on the disease for professionals and a new book for lay audiences, "Seven Steps to Managing Your Memory."

According to Carl Ellenberger, any memory you learn before the onset of Alzheimer's disease stays there much longer than recent memories. "You don't learn anything new. You don't remember what you had for lunch, but you remember something that happened when you were 10-years old," Ellenberger said. Carol remembers the music from when she was a teenager but can't remember new songs. 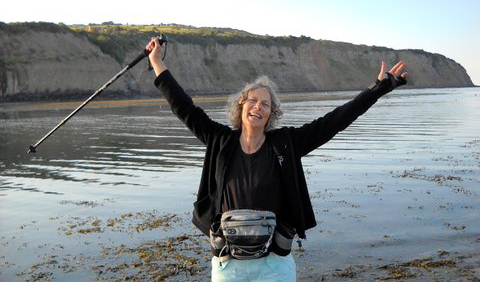 The music therapist who visited my support group last month, Dorian Campbell, favors music with lyrics. She has a master's degree in music therapy from the State University of New York at New Paltz and works for the company Seasons Hospice. Classical music shifts moods, tempos, timbre, is simply more complex than a Paul Simon song, she said. That can make it uncomfortable to someone with dementia. She can control these musical elements because she does not use recorded music and plays half a dozen instruments.

Campbell said for the people she treats, she plays whatever is meaningful to them. The music affects anxiety, depression, agitation, and even reduces acute pain. Some get so relaxed they fall asleep, she said.

So we are now doing our own music therapy: Baltimore Symphony next month. She will hear what the French composer Francois Poulenc has to say.