How Caves and Frozen Zoos Are Putting Endangered Species on Ice

Researchers are freezing cell samples with liquid nitrogen to keep biodiversity alive. Could this be the best way to conserve species for the future?
Image 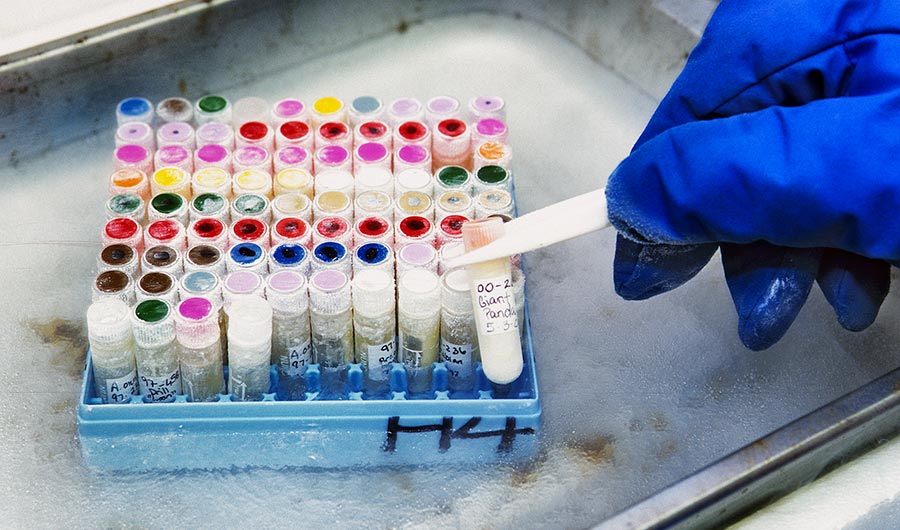 (Inside Science) -- In 1975, medical doctor Kurt Benirschke founded the Center for the Reproduction of Endangered Species with the goal of using molecular genetics tools to save endangered species. In the corner of the modest lab, which contained a freezer with liquid nitrogen to bank cells, Benirschke hung a poster: “You must collect things for reasons you don’t yet understand.”

That credo holds true for scientists in cryobiology today. Researchers are in a race against time to bank the tissues and cells of creatures and plants disappearing from our world. They don’t necessarily know what they’ll be able to do with these genetic libraries in the future, but to lose them would be unthinkable in the midst of a global extinction crisis.

At the Society for Cryobiology annual meeting in San Diego last week, Oliver Ryder spoke about how precious and irreplaceable biobanks are. Ryder directs the San Diego Zoo's "Frozen Zoo" program, the largest animal cryobank in the world.

“Being able to successfully preserve samples is the opportunity of our time, and one that will impact the future,” he told the audience of scientists gathered at the conference. The repository holds nearly 10,000 cell cultures of 1,000 different species. They’re mostly mammals, but the cryobank also includes samples from birds, reptiles and amphibians.

The trick with cryopreserving anything is to avoid forming ice crystals as the samples drop in temperature to minus 196 degrees Celsius in liquid nitrogen. That temperature arrests all biological activity, including the degradation of genetic material. Depending on the sample, scientists might use different techniques to prevent ice crystals from developing, but the most common method is to treat the cells with dimethyl sulfoxide. It basically turns the water-based samples into glass.

There is a lot of information inside those banked cells. They can contribute to a better scientific understanding of evolution and how species are connected, but also help with studies on aging, genetics and genealogy. They can also help scientists learn more about animal health research and practice, and stem cells.

In addition, one of the primary goals is to help add genetic diversity to threatened or endangered populations that are at risk of being inbred. “If you can flow in genes from another population, the recipient population can show a dramatic increase of fitness,” said Ryder. Scientists could potentially use banked cells to clone long-dead animals that would then add to the genetic diversity of the distressed population.

One of the species that the Frozen Zoo aims to rescue is the northern white rhino. As of today, the only living females, both in Kenya, are too old to reproduce. But the Frozen Zoo scientists have banked 12 cell cultures over the years. Once they develop a reliable technique, they’d like to thaw the cells, turn them into induced pluripotent stem cells, and make egg and sperm in order to raise new rhino babies.

Some species are easier to freeze than others. Scientists have been successful freezing mammal and bird cells, but have had a harder time with amphibian cells, succeeding less than 1% of the time. Other researchers presenting at the conference were attempting even more ambitious fauna: coral reefs, mollusks, snakes, fish and eels, among others.

It’s not easy to get access to endangered creatures. Often, the researchers collect a pea-sized amount of tissue from a living animal during an exam, or gather the notch of skin that zookeepers remove from an animal’s ear to identify it. They also take samples during autopsy examinations, which all zoo animals undergo, said Marlys Houck, the Frozen Zoo's curator. Although they’d like to be able to save every species before the last individuals die, the end goal of the cryobank is often to gather data, she said. “Sometimes it’s just saving some information about that species, so we’d have a living cell that you can look at the genome and see how it’s related to other species. We don’t have that for the dodo or the passenger pigeon.”

There's another famous cryobank, the Svalbard seed vault. Inside this vast mountain cave tunnel between Norway and the North Pole are millions of the world’s important crop seeds, sealed in specially designed three-ply foil packages placed in sealed boxes and stored on shelves inside the vault. Svalbard is a frosty minus 18 degrees Celsius, held steady by the surrounding permafrost. More than 820,000 seed samples are stored in the vault.

But the problem, says Bart Panis, a senior researcher with the Leuven, Belgium-based nonprofit Bioversity International, is that not all seeds can be stored at that temperature. Crops that produce a so-called recalcitrant seed -- including popular plants like avocado, mango, rubber and cocoa -- can’t be stored at this temperature without losing viability for regeneration. In addition, for sterile crops like banana -- which lack seeds -- seed conservation is not an option.

For these crops, other methods are needed. Panis described the method for genebanking bananas and their close relatives. Together, they are considered a staple food that provides the basis for nutrition for up to 1 billion people each day. Bioversity has amassed the largest collection of banana germplasm -- the tissue from which new plants can be born.

This is how it works: The researchers grow the bananas in test tubes in a temperate environment, about 15 degrees C -- about 10 degrees colder than their typical habitat. They also clip a tiny part of the plant’s growing point (known as the maristem) and freeze that to minus 196 degrees, which preserves the plants indefinitely, but allows the plants to be revived again when needed.

Panis and the other researchers have amassed a reference collection of more than 1,500 banana samples. That’s the largest number of banana samples anywhere in the world. They also have a backup location in Montpelier, France, in case something happens to the building in Leuven. San Diego's Frozen Zoo has a backup site for frozen sample about 30 miles from their main location.

Ryder says that cryopreservation may actually change the way humanity thinks about conservation. “Because try as we might, we are losing species. And if we don’t acknowledge our lack of prowess as a civilization in saving species, we are always going to be banking the last one,” he said. “But if we start to anticipate that not everything is going to be saved, but we could collect biodiversity, we may be able to offer the future a richer legacy.”

For some species, cell-based technology may be the only way to save them in perpetuity, and we need to gather and preserve samples as soon as possible, said Ryder. “You can only save species that you bank."