How Do Lady Turkeys Pick Their Guys?

How Do Lady Turkeys Pick Their Guys? 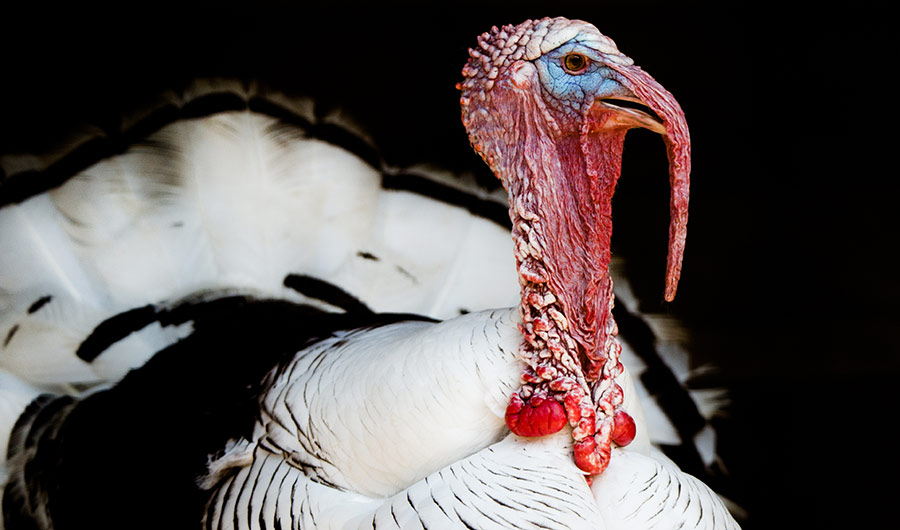 (Inside Science) -- When you pick a turkey, you're probably looking for things like plumpness and price. But when a female turkey makes her choice, she's focused on something else: a nubbin of flesh called a "snood" that sits just above the male's beak. When he's ready for sex, his snood swells into a puckered, dribbly noodle several inches long.

Male turkeys are some of the most extravagantly ornamented birds in North America. The display they use for seduction involves puffing up iridescent body feathers, spreading fanlike tails, and strutting majestically on spurred feet. Their heads are completely bare of feathers and adorned with a surplus of fleshy nobs and baubles, all of which change color.

"They can be multi-colored one second, and within a few seconds, the whole thing can turn to white," said Richard Buchholz, behavioral ecologist at the University of Mississippi in Oxford. The color shifts involve U.S. patriotic shades of red, white and blue.

Biologists have long suspected that these ornaments serve to attract mates. But when Buchholz offered 23 female turkeys a choice between pairs of males in a 1995 study in the journal Animal Behaviour, the only trait they obviously cared about was the length of the male's snood. Even a difference of a few millimeters was enough to sway many females' decisions.

One possible explanation: Wild-caught males with long snoods tended to have fewer microscopic parasites called coccidia. And in later research, Buchholz found that long-snooded males may have a more advantageous set of genetic traits related to a key component of their immune system known as the "major histocompatibility complex." The findings suggest that females use snood length as an indicator of genetic quality, choosing mates that are likely to produce healthier offspring.

It's still possible that female turkeys evaluate other male traits as well. Not every trait has been studied, and many turkey traits are difficult to measure or manipulate in experiments. But for now, said Buchholz, "we know they care about snoods. And that's it."

Researchers Study Violinists To Learn How Humans Act in Synchrony
Alligators May Be Able to Survive Venomous Snake Bites
New Theory Says We’ve Been Wrong About How Bubbles Pop
Crustacean Genes May Solve Debate Over How Insects Evolved to Fly
Some Beetles Survive Being Eaten, New Study Finds
END_OF_DOCUMENT_TOKEN_TO_BE_REPLACED

COVID-19 Vaccine, Sharks and Mezcal
Crabs Use Belly Sounds To Communicate
Touring The Trinity Test Site
Protests, A Retracted Paper, and a Super-Earth Planet
Why Is an Empty Shampoo Bottle So Easy To Knock Over?
END_OF_DOCUMENT_TOKEN_TO_BE_REPLACED