How Famines and Epidemics Trigger Wars 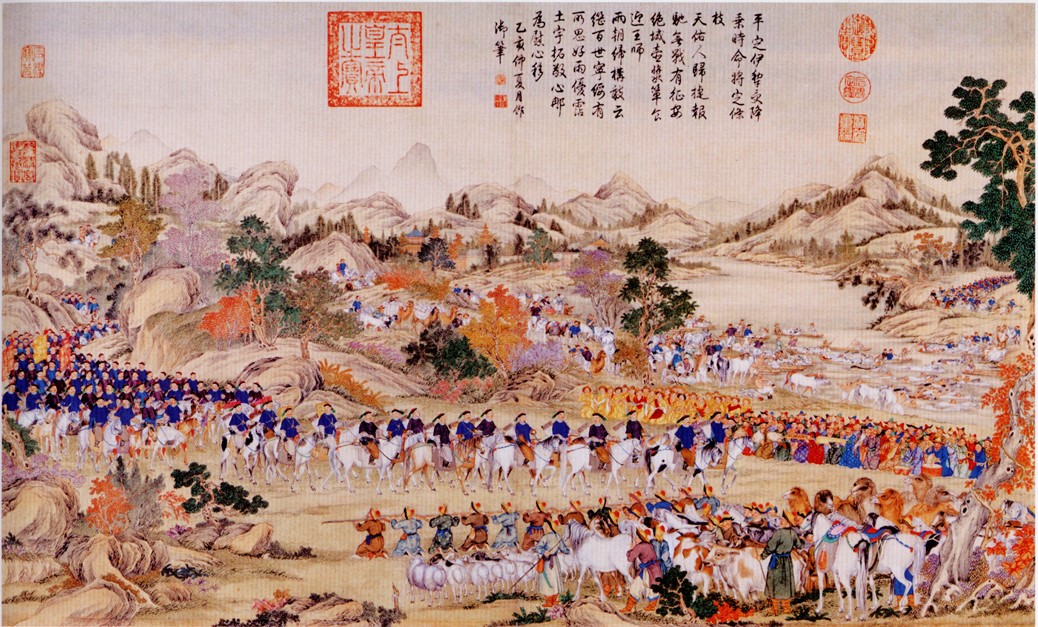 The Chinese army reaching the Ili river without opposition during Qing Dynasty's military campaign against the Dzungars in 1755.

(Inside Science) -- "There are only nine meals between mankind and anarchy," once said American journalist Alfred Henry Lewis (1855-1914). A recent study that examined the correlation between thousands of natural disasters and wars in China’s history may prove him right. The paper, published in the journal The Holocene, adds to the growing body of literature on the sociological impact of extreme weather events, a field that researchers argue will be important to understand as the current climate continues to change.

The Mandate of Heaven

"The essence of Confucianism is about maintaining social order in agrarian society. The king should not be challenged, the young should respect the old, etc.," wrote Harry Lee in an email to Inside Science. Lee is a historian from The University of Hong Kong and author of the paper. "Under Confucianism, the peasants can only use 'the Mandate of Heaven' as an excuse to rebel against their ruler."

The Mandate of Heaven is the ancient Chinese belief that the king, sometimes referred to as "the Son of Heaven," was chosen by the gods. When a drought or an epidemic devastates a region, the people would see it as a sign that the gods are no longer satisfied with the ruler, and they are free to revolt without violating the ideals of Confucianism.

Wars triggered by natural disasters is nothing new, but Lee discovered peculiarly distinctive trigger patterns for wars in northern China versus southern China. By evaluating more than 5,000 instances of natural disasters and more than 1,000 internal wars that occurred between 1470 and 1911 and were documented in historical texts, Lee discovered that wars were more likely to be triggered by epidemics in the north and famines in the south.

To explain his findings, Lee theorizes that northern China’s vulnerability to epidemics during that time period might be caused by its denser and more mobile population, which included many animal herders and farmers from different areas interacting frequently. On the other hand, southern China is historically the more agriculturally productive area, and the reasons why it was vulnerable to famines are less intuitive. Lee thinks that a famine in such an agriculturally productive region would imply the food yield had decreased more dramatically than what was considered a famine elsewhere, creating a more desperate population hungry for war.

It is also possible that the infamous Malthusian Trap, sometimes known as the population trap, played a role in southern China’s vulnerability to famines, said Colin Kelley, a climate scientist from Columbia University's International Research Institute for Climate and Society, and not affiliated with the study. Because of its abundant food supply, the population in southern China might have boomed during times when food was plentiful, only to create more dead bodies when a famine did occur. Lee notes that since his study did not include statistics on population fluctuation and food yield, it is difficult to estimate the significance of the population trap theory in southern China.

Not all regions and disasters are created equal

In anticipation of the effects of current climate change trends, researchers across scientific disciplines are looking at the socio-economic impact of natural disasters and trying to evaluate how different regions may react to different threats, such as floods and droughts.

Kelley pointed to the recent conflicts in Syria as perhaps caused in part by a drought in the region, wondering if the same kind of conflicts could arise in regions like California when severe droughts occur.

"Of course, the circumstances are very different, not only with respect to the drought impacts. It’s very important to consider the context. California is one of the richest states in one of the richest countries in the world, and so they have a much higher resilience to the same level of environmental shocks," he said.

Intuitively, natural disasters and socio-economic catastrophes today are more likely to affect less developed societies that are still largely agrarian. In other words, poorer countries that contributed the least to the current global climate problems may also be the ones most vulnerable to its consequences.

Kelley said that the number of variables in a problem like predicting armed conflicts means more data and research are needed before we can accurately forecast how different environmental disasters will affect different regions of the world. For instance, one region may be more resilient to a mild, prolonged drought than a short, severe drought, while a different region may be the opposite.

"These kinds of interdisciplinary studies have been less common in the scientific literature, but I believe physical and social scientists are focusing increasingly on collaborative research surrounding these kinds of ideas," said Kelley. "Looking at the big picture is important, and it's not always something that's easy to do."