NASA will soon see if specially designed blades spinning really fast can carry a small chopper through the planet’s barely there atmosphere.
Image 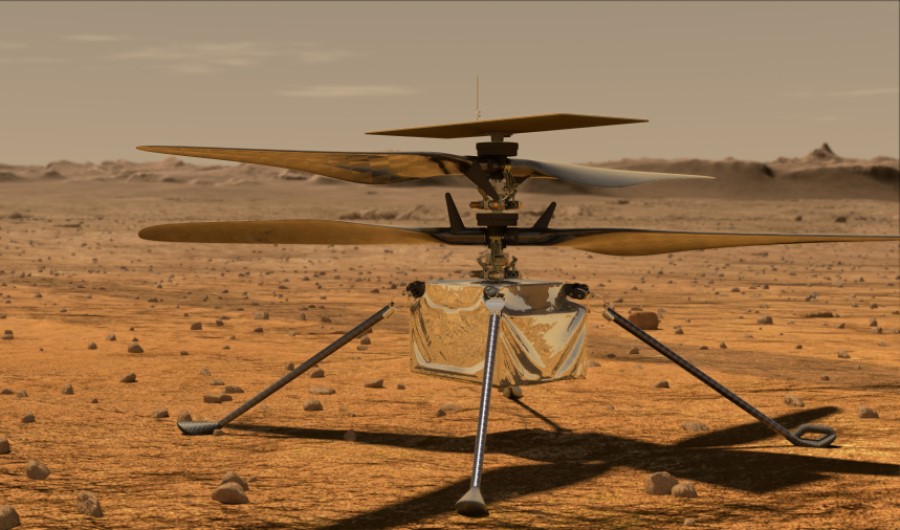 An artist's conception of the helicopter on Mars.

(Inside Science) -- This summer, the Mars 2020 mission is set to blast off from Cape Canaveral, Florida, on the start of a half-year journey to the red planet. Its star passenger is the Perseverance rover, tasked with searching for signs of ancient life and collecting rock and soil samples. But tucked underneath the 1-ton rover is a 4-pound companion vehicle that could quietly make space exploration history, becoming the first power-controlled aircraft to fly on another planet.

Called Ingenuity, or simply the Mars Helicopter, the small craft is carefully designed to fly in a place where there is little air to push around. Mars’ atmosphere is 100 times thinner than Earth’s, so flying near the surface of the planet is equivalent to flying at around 100,000 feet on Earth, a feat no helicopter has attempted.

The team working on the Mars chopper had to balance numerous competing constraints -- the blades had to be big enough to generate sufficient lift, but small enough to fit under the rover; the structure had to be sturdy enough to withstand the harshness of launch and the "seven minutes of terror" of landing, but light enough to fly; and on and on.

The final design, arrived at after a nearly 7-year effort, houses the "brains" of the helicopter in a small box mounted below two 4-foot rotors that spin at up to 2,800 rpm in opposite directions. The sharp leading edge and flat shape of the rotors’ blades are tailored to get better lift in Mars’ thin air. Four skinny legs support the Mars Helicopter on the ground, and a solar panel above the blades recharges the high-power lithium ion batteries.

The design passed crucial tests in a special chamber at the Jet Propulsion Laboratory in Pasadena, California. The researchers mimicked Mars’ atmosphere by pumping out air and pumping in the right amount of carbon dioxide, and they rigged a motorized pulley and tether to mimic the effects of Mars’ lighter gravity, which is about 38% that of Earth’s. The real test will come next May, when the helicopter is scheduled to begin a series of short flights on Mars. The craft is designed to fly at a maximum speed of approximately 7 miles per hour and has a range of about 600 feet per trip. Its first mission is simply to demonstrate that it’s possible to get off the ground, fly a set course and land safely.

If all goes according to plan, the helicopter could be the first in a line of extraplanetary aircraft. While the design team doesn’t think a Mars helicopter will ever be big enough to transport a human pilot, they envision future missions where aircraft weighing up to 45 pounds could scout terrain; explore steep slopes, cliff walls or caves; or ferry scientific instruments and samples. But first, a small helicopter must boldly fly where no helicopter has flown before.