How Important Is Curry To The Warriors' Playoff Performance?

How Important Is Curry To The Warriors' Playoff Performance?

When will Curry come back and how good is the team without him? 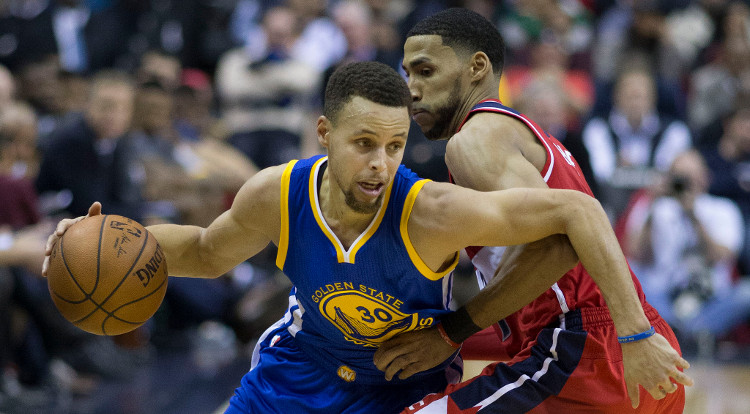 (Inside Science Currents) -- During this year's NBA finals, the Golden State Warriors have climbed to a 2-0 series lead against their second round opponent the Portland Trailblazers, despite the absence of star guard and likely league MVP Steph Curry due to an injury. The team entered the playoffs as a favorite to win the title. Even though Curry, their top player, has played in just two of the seven games, the Warriors are 6-1 overall. Then, on Thursday, head coach Steve Kerr announced that Curry will not play in Saturday's Game 3 in Portland.

The Warriors need to win this series and the two that would follow in order to repeat as NBA champions, leaving the team with two important questions: When will Curry come back and how good is the team without him?

Curry has suffered two injuries during the playoffs, both in the first round series against Houston, a right ankle injury on April 16 in Game 1, and a sprained right knee, in April 24th's Game 4. Team staff initially announced that he'd be out about 2 weeks with a grade 1 sprain of the medial collateral ligament in his knee, as reported in Sports Illustrated. This general information from the University of California San Francisco Medical Center says that grade 1 tears typically heal within a week and a half.

Curry also announced this week that he had platelet-rich plasma treatment on his knee, as reported by the San Jose Mercury News. In this type of treatment, doctors inject platelet-rich plasma, gathered from the player's own blood, into the injured area. Platelets include substances called growth factors that can help promote healing within the knee. Doctors aren't convinced that it works to speed up recovery, but according to this Wired article, they don't think that platelet-rich plasma injections are harmful.

The Warriors are left to wait and see if Curry's recovery continues to drag on, or if he'll soon be ready to play. In the meantime they still have to play the games. What do we know about how good he is?

Last month, numberFire writer J.J. Zacharlason tried to figure out where Steph Curry's 402 3-pointers in one season ranked among all career, single season and single game sports records. Building from research published online in the Journal of Sports Analytics, Zacharlason placed Curry's record in 4th place overall, ahead of Joe DiMaggio's 56-game hitting streak and Wilt Chamberlain's 100-point game, but behind baseball outfielder Barry Bonds' 688 intentional walks, baseball pitcher Nolan Ryan's 7 no-hitters, and hockey player Wayne Gretzky's 1963 assists. Each of the marks ahead of Curry's record is far ahead of the person in second place. But still, it's difficult to consider this ranking objective -- it's definitely debatable, and dependent on the definition of best, or most impressive. Many people have compared Curry's 3-point shooting success to Babe Ruth's home run hitting. Ruth set a record with 29 homers in 1919, then the next year hit 54, and the next year hit 59, all with the New York Yankees. It's pretty impressive when a player can be reasonably compared to Babe Ruth.

It doesn't require advanced analysis to realize that Curry is a talented player. It's harder to figure out how good the team is without him. ESPN.com's Micah Adams says that the Warriors without Curry are the second best team in the NBA, behind the team favored to be their conference finals opponent, the San Antonio Spurs (currently tied 1-1 in their series with the Oklahoma City Thunder). Adams found that the Warriors best lineup without Curry still includes two of the best performers from this season in Klay Thompson and Draymond Green, at about 8 points better than opponents over the course of 100 possessions. (With Curry, Thompson and Green, the Warriors were more than 20 points per 100 possessions better than their opponents.)

Earlier this week, I spoke to Sameer Deshpande, a graduate student in statistics at the Wharton School of the University of Pennsylvania, in Philadelphia. Deshpande's research on the value of individual NBA players will be published in an upcoming issue of the Journal of Quantitative Analysis in Sports, and is currently available online.

Deshpande's research looked at the 2013-14 NBA season and also the previous five years, trying to identify the lineups that performed the best according to a metric based on how much that performance increased the team's likelihood of winning the game. So a basket that allows a team to take the lead with a few seconds left is weighted more than increasing the lead from 20 to 22 points in the middle of the third period. Even two seasons ago the Warriors stood out as having the first and third best-performing lineups in the league, Deshpande and co-author Shane Jensen found.

Deshpande said that if he were to run his analysis for this season, then he would probably see Curry atop the leaders, but that the overall results might be surprising.

"Steph Curry might show up, but you might also have somebody like [Warriors forward] Andre Iguodala come up because he was on a lot of their very successful lineups," he said. "It's hard to disentangle [Curry] away from the rest of his teammates. … I think it definitely would be cool to look at."

The other important question in Curry's recovery of course is whether he'll be at the top of his game when he returns. We might find out on Monday, May 9 if Curry is able to return for Game 4 of the series against the Trail Blazers.

Researchers Study Violinists To Learn How Humans Act in Synchrony
Alligators May Be Able to Survive Venomous Snake Bites
New Theory Says We’ve Been Wrong About How Bubbles Pop
Crustacean Genes May Solve Debate Over How Insects Evolved to Fly
Some Beetles Survive Being Eaten, New Study Finds
END_OF_DOCUMENT_TOKEN_TO_BE_REPLACED

COVID-19 Vaccine, Sharks and Mezcal
Crabs Use Belly Sounds To Communicate
Touring The Trinity Test Site
Protests, A Retracted Paper, and a Super-Earth Planet
Why Is an Empty Shampoo Bottle So Easy To Knock Over?
END_OF_DOCUMENT_TOKEN_TO_BE_REPLACED