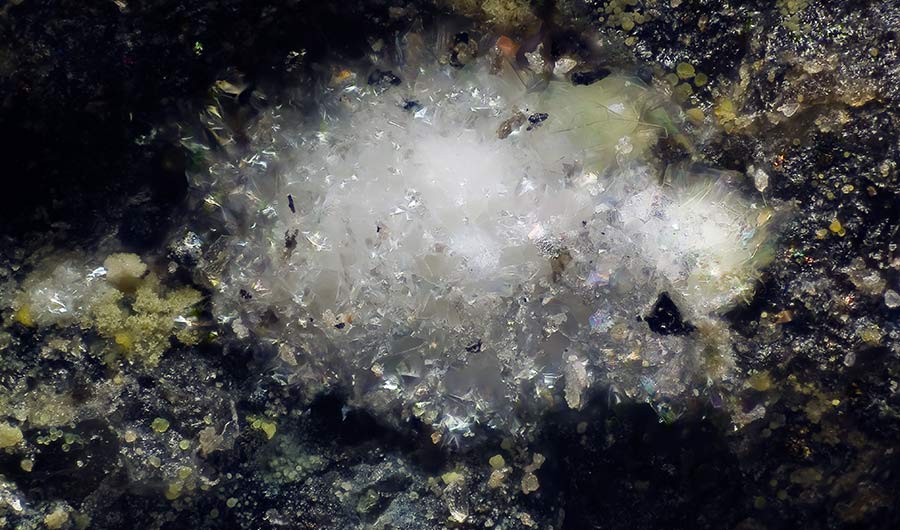 Abellaite, a mineral that Hazen's team predicted in a paper published last year, was recently discovered in a mine in northeastern Spain.

(Inside Science) -- Last Wednesday, mineralogist Robert Hazen opened an email and learned that he had been right once again. On the wall of a Chinese cobalt mine, a colleague had found tiny black crystals that turned out to be a type of cobalt oxide that had never before been found in nature, with a ratio of three atoms of cobalt to four of oxygen. Hazen's team had predicted it would be there using "big data" statistical methods, an approach common in other fields but only now being applied to mineral discovery.

A mineral is any chemical compound with a distinct crystal structure that is formed naturally on Earth or in space and not created by the body of a living organism. More than 5,200 minerals have been named and described, and Hazen and his colleagues estimate that at least 1,500 remain undiscovered. In a series of papers published in the last couple of years, the team has made detailed predictions about the types of minerals that are missing and where they might be found. Several have already been discovered, including the new cobalt oxide.

"It's amazing -- this whole technique of visualizing the world in a very rich way where you immediately see patterns that you'd never see otherwise," said Hazen, who is a researcher at the Carnegie Institution for Science and executive director of the Deep Carbon Observatory in Washington D.C.

For example, the types of rare copper-containing minerals that formed in the last 70 million years are strikingly different from those that formed in the early days of our planet, before life filled the atmosphere with oxygen, according to the new study. The researchers even claim to have found evidence of a previously unknown mass extinction that occurred more than 540 million years ago, according to an unpublished analysis of fossils from the Ediacaran period.

More on networks from Inside Science

Understanding Languages with Physics and Math

The "big data" approach would have been impossible until recently. A team at the University of Arizona has spent the last few years combing through thousands of publications describing mineral structures and properties, combining their findings into a single database called the RUFF Project. And since 2001, a nonprofit group called the Hudson Institute of Mineralogy has been gathering data on where people find particular minerals. Its MINDAT.org database now has about a million mineral-location pairs, according to Shaunna Morrison, a mineralogist at the Carnegie Institution for Science in Washington and first author of the new network analysis study.

To make their predictions, Morrison, Hazen and their colleagues use the RUFF and MINDAT databases to compare well known minerals with rare ones that have only occasionally been collected. In this way, they can calculate the likelihood that researchers and collectors will identify new minerals in a given place or category in the future, said Hazen.

For example, igneous minerals -- those formed from melted rocks deep in the Earth -- are all relatively common and well studied, so chances are good that we've found them all, said Morrison. But of the 66 named cobalt-containing minerals, 22 have been found only in one or two locations. The team predicts that at least 15 cobalt minerals remain undiscovered.

Some predicted minerals, including the cobalt oxide crystals just discovered in China, are compounds that were previously synthesized in the lab, so prospectors know exactly what they're looking for. But, said Hazen, other minerals will be completely new to science.

"We could predict that there's a new copper mineral, or there's a new cobalt mineral. Just statistically, it has to be there," he said. "But in many cases, we don't know what it looks like."

The colored circles in this diagram represent different types of copper-containing minerals, with each color representing a chemically related group and lines connecting minerals that are found together. The way the groups cluster in the diagram may help researchers discover new copper minerals.

Mineral Networks on Earth and Beyond

Social networks often use dots to represent people and lines to represent relationships between them. Similar diagrams have been used to study everything from the brain to Earth's climate, with visualizations created and analyzed using sophisticated mathematical techniques. Hazen and his colleagues began applying these methods to minerals on June 7, 2016, during a data visualization workshop at the Rensselaer Polytechnic Institute in Troy, New York.

"The data scientists were telling us about some of the techniques they used. And it just struck us: 'Whoa, we could do this with minerals!'" said Hazen.

In mineral networks, each dot is a type of mineral, and the lines usually connect types of minerals that are found together. By representing minerals this way, Hazen, Morrison and their colleagues can turn a dense spreadsheet of data into a picture from which patterns jump out. Thus far, they have completed network analyses of igneous rocks, chromium minerals and copper minerals. They are continuing to add new groups of minerals and new types of network diagrams, with ideas coming "faster than our coders can write code," said Hazen.

The implications range from the practical to the cosmic. For example, Hazen is working with the U.S. Geological Survey to find valuable ore deposits. Morrison, meanwhile, is diagramming minerals from meteorites and moon rocks, and finding that they don't much resemble networks of minerals formed on Earth. She suspects the differences are related to Earth's lush coating of living things.

"What we're seeing so far is that Mars and the moon have pretty different networks than we see on Earth," she said. "So we think we might be able to apply this to looking at other worlds."

The techniques used in the new study have already proved their worth in other fields, said Alex Lex, a computer scientist in the Visualization Design Lab at the University of Utah in Salt Lake City, who was not involved in the project. He sees Hazen and Morrison's latest work as part of a growing trend, with more and more people from across the sciences discovering the value of viewing data as networks.

Hazen and Morrison's techniques will be free for anyone to use, and Hazen hopes they will be adopted by other mineral researchers. But the techniques are still unfamiliar to mineralogy veterans like Anthony Kampf, curator emeritus of mineral sciences at the Natural History Museum of Los Angeles County in California. Kampf has named and described around 200 minerals over his career. He said he feels no personal need for statistical predictions, as his team of hobbyists already sends him more new mineral specimens than he can keep up with.

All the same, Kampf can see the potential of what Hazen, Morrison and their colleagues are doing. "The paper seems to be an ambitious and insightful approach to understanding mineral systems on a broad scale," he wrote in an email. "It’s always exciting to see a new way of looking at things that reveals hidden relationships."

The scope for discovery may be vast. Indeed, Kampf suspects the universe holds far more than the 1,500 undiscovered minerals that have so far been predicted. In his estimate, "we're never going to find them all."