How To Pack For A Space Mission

Astronauts should pack sleeping tablets and congestion medication before heading for the space station.
Image 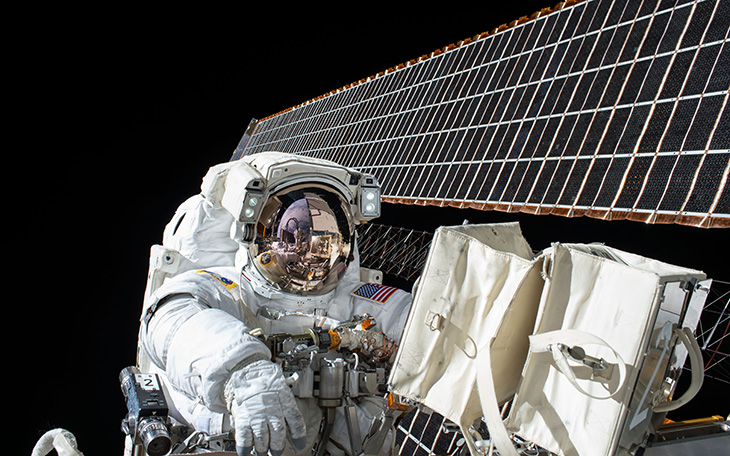 (Inside Science) -- Packing for a long trip can feel like a daunting task. For no one is this more true than the men and women who don domed visors.

Astronauts must do without whatever items they forget, which can become a serious issue when you consider the medical needs that may arise during a mission.

Each U.S. crewmember of the International Space Station has two so-called "flight surgeons" assigned to them. It's the responsibility of these surgeons to pack the pills. They have to plan for any number of medical eventualities.

New research suggests the surgeons should pack lots of sleeping pills and congestion-relieving medication for their astronauts.

There are several different medical boxes on the space station, which are grouped into categories such as injections, topical medication, oral medication, and emergency equipment. Then there's a personal pack to help individual astronauts cope with illnesses and injuries that might come their way during a mission.

"We try to contour the personal pack to each person," said one of NASA's flight surgeons Dr. Anil Menon. His task is confined by dimensions; the packs are typically about two feet wide, two feet long, and four inches thick.

Astronauts are usually in good health before setting out for the space station. Menon confirmed that crewmembers are screened prior to selection to reduce medical problems in flight. NASA's space physical is similar to a military health check; they look at things like visual acuity and blood pressure. Although if sight deteriorates then glasses are allowed onboard.

Finally, any other issues that develop are reviewed on a case-by-case basis.

"Our doctors will look at those things and do waivers to see if it is okay to fly," said Menon.

While bacteria and other microbes can survive space travel, anecdotal evidence suggests that infections are rare; there are fewer people to transmit the germs. Nevertheless, the space station carries a plethora of antibiotics just in case.

"We usually have just six people up there with good filtering systems," said Menon, "They're also not around kids. They get a lot less cold symptoms."

A study recently published in The FASEB Journal has sought to make Menon's pill-packing job more data driven. It identified the medicines most frequently taken by astronauts. The paper analyzed the medical records of 24 space station crewmembers on missions lasting longer than 30 days from 2002 to 2012.

The analysis highlighted areas of persistent irritation for the space-dwelling patients.

"The chief drivers of medication use were sleep and congestion or allergy symptoms," said study author Virginia Wotring, an assistant professor at the Center of Space Medicine at Baylor College of Medicine in Houston.

While the sample size is a limitation of the research, Wotring maintained that NASA is used to working with small data sets and that 24 is actually relatively large for a study such as this. Other experts agreed.

"These studies are useful" said Menon. "Anything that gives us further insight into what to expect can be used in designing the packs." These types of studies will become more pertinent should humans ever venture a mission to the red planet, said Menon. "If we go to Mars we'd have even smaller packs and maybe just one. Then the pressure would really be on."

"I don't know if these were true allergies," said Wotring. Humans have evolved certain adaptations to deal with Earth's gravity. One of them is a physiological system that prevents blood from pooling in the feet and legs. All of those adaptations remain active when in space, which could mean there's more fluid in the head than usual, creating a sensation of sinus pressure or pains. "That's fairly speculative though; we still don't fully understand how fluids are moving about in the body during space flight," said Wotring.

Wotring was not able to access the diagnoses behind the use of medication. While it's likely the astronauts were taking sleeping tablets and congestion-relieving drugs because they were sleep deprived and felt congested, she doesn't know that for sure. Doctors frequently prescribe drugs for issues aside from the medication's primary use.

"The use is implied, but not known," explained Wotring.

Nor did the study did look at the medical records of the crewmembers before or after their mission.

"One caveat of this study is that I don't know how often they would have used that medication on the ground," admitted Wotring, "I don't know if their usage is typical." That's something she's looking into with a follow up study.

Encouragingly though, Wotring's results match up with previous work. Laura Barger, instructor in medicine and associate physiologist at Harvard Medical School's Division of Sleep and Circadian Disorders in Boston, researches the sleep patterns of astronauts. She said that Wotring's findings complement her own studies, "It gives you confidence when someone else's results align with your own."

Instead of a 24-hour light-dark cycle we experience on earth, crewmembers on the space station see a sunrise and sunset every 92 minutes. The light on the station is also quite dim and occasionally the astronauts have to work odd shifts. All this is likely to have an effect on their circadian rhythm and sleep pattern, said Barger.

Meanwhile, Menon says more studies such as these will help him prepare for longer and more adventurous missions.