Brood X is emerging across 15 states. Here's how to decode all that buzzing from the trees.
Image 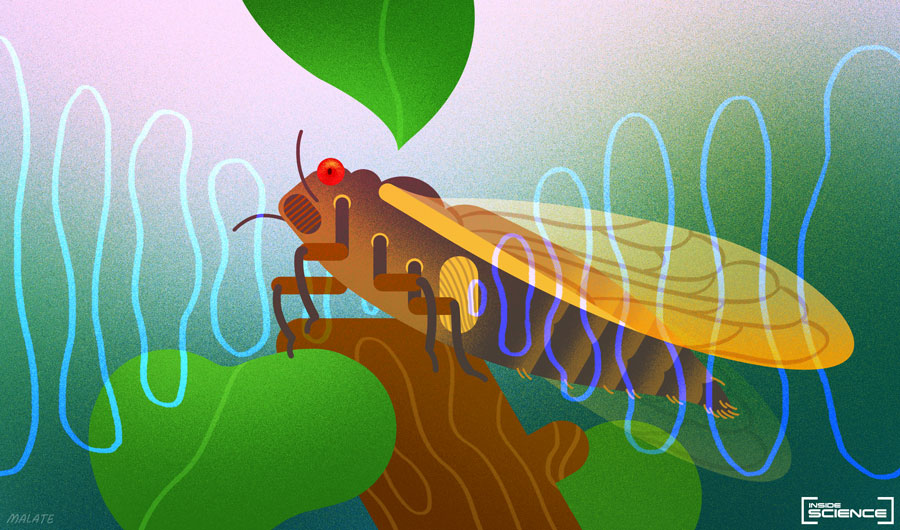 (Inside Science) -- When you first hear it, a cicada chorus may sound like simple buzzing. But to a cicada, that cacophony is full of meaning.

There are three species in Brood X, the cohort of 17-year cicadas now emerging in much of the eastern U.S. Members of each species congregate with their own kind and talk to each other with their own species-specific sounds. Males sing to court females and "jam" the songs of other males, while females make clicks with their wings to encourage or repel suitors.

Humans can learn to decode these sounds. John Cooley, a biologist at the University of Connecticut, can speak cicada so well he can seduce insects of either sex. He uses his voice to imitate males and gentle finger snaps to imitate females.

"All the females are cueing in on is the pitch and the rhythm," he said. "You hit that, and you're going to get a response."

Males "sing" by vibrating tymbal organs located on the sides of the abdomen. They also produce alarm calls when handled, as seen in this video by Greg Holmes.

Cicadas spend most of their lives as juveniles called nymphs, living underground and feeding on fluid from tree roots. Eventually, they dig to the surface, shed their nymphal exoskeletons, and fly into the trees to sing, breed and die.

Most species don't synchronize their emergence; instead, a small batch will come out to breed every year. Such species are often called annual cicadas, even though they may live for several years as nymphs.

A male annual cicada will find his own spot from which to sing, and interested females who hear the song will fly to meet him. The louder the male's song, the farther it will travel, and the more females he can call in. As a result, the songs of annual species are often deafeningly loud.

Male annual cicadas like this Neocicada hieroglyphica must call in females from far away, so their songs are often deafeningly loud.

The songs of periodical cicadas, including the 17-year cicadas, sound loud en masse, but each male's song is typically quieter than that of an annual cicada. That's because periodical cicadas emerge on the same schedule, waiting for a set number of years and then all coming out to breed at once. The adults gather in dense choruses with huge numbers of individuals, so there's little point trying to call in females from far away. Instead, periodical cicada males use their songs to get the attention of females that are already nearby.

"It's obvious where the females are. They're right here in this giant pile of bugs," said Cooley. "The chorus is such an acoustical mess anyway, your sound's only going to travel a very short distance before it's washed out in the general chaos."

The three species now emerging in Brood X -- Magicicada septendecim, M. cassini and M. septendecula -- have the longest documented lifespans of any cicadas in the world, according to Floyd Shockley, an entomologist with the Smithsonian National Museum of Natural History in Washington. Different regions have their own broods that emerge in different years, but all broods containing those three species are on 17-year schedules.

Females only want to mate with males of their own species, and songs are how they tell the difference. Species that emerge together in the same brood typically have songs that are easy to tell apart.

In Brood X, M. septendecim's song is low and haunting, resembling "a UFO landing or a strange musical note in the woods," said David Marshall, an evolutionary biologist with the University of Connecticut. M. cassini's is similar to M. septendecim's in structure, but higher and faster. M. septendecula has a more complicated song made up of rapid pulses that change tone half way through.

In the early 2000s, Cooley and Marshall discovered a previously unknown cicada species that appears to have changed its song to avoid being mistaken for its neighbors. While they can't be sure how the new species arose, evidence suggests the process started when some of the 17-year M. septendecim switched to a 13-year schedule. Marshall suspects the split happened at least several thousand years ago.

In the northern edge of its range, the new species, dubbed M. neotredecim, doesn't encounter any similar-sounding species, and it retains the song of its 17-year ancestors. But farther south, it meets another closely related 13-year species, M. tredecim, which sounds almost the same. In areas where M. neotredecim and M. tredecim emerge together, the new species appears to have shifted to a higher pitch. Evidently, the females' need to identify their own species was so strong that it drove males to evolve from baritones to tenors.

For a long time, the courtship rituals of cicadas in the Magicicada genus appeared to make little sense. The males would go through an elaborate series of songs and behaviors, while the females, to all appearances, "just sat there like lumps," said Cooley.

What was missing was a signal by the female to show she approved of a male's efforts. Researchers in the late 70s failed to spot it, and so did Marshall during his first field season in 1991. But four years later, Cooley and Marshall noticed what the male cicadas had been watching for all along: a flick of the female's wings that produced a soft click.

This wing-flick signal means "yes, come mate with me" -- but only if done at precisely the right time. Performed at any other time, it means "go away, I'm not interested."

To make matters worse, nearly all the wing-flicks one sees are of the "go away" variety, because females typically mate only once. By the time most researchers spotted the "come hither" wing-flick, they had already seen so many of the other kind that they'd learned to discount it.

"The females that you see obviously out in the chorus are the ones that are either not yet ready to mate, or they have already mated, and so they're not interested in mating," said Cooley. "They come into sexual receptivity unpredictably and gradually, and then they flick their wings, and boom, they're out of the mating pool."

Because mating opportunities are so rare, males will pursue anything that seems even vaguely promising. If a random movement or clicklike sound occurs at the right time, a male may mistake it for a receptive female.

"They'll try to mate with acorns. They'll try to mate with spiders. Anything," said Cooley. This was fortunate for the researchers, because it allowed them to perform experiments by snapping their fingers and posing miscellaneous objects as model cicadas. The caps of Sharpie pens worked well, being about the same size and color as a female cicada. So did an old light switch, which had "plenty of places on it where the male can attach his genitalia," said Cooley.

This video by Greg Holmes shows courtship and mating in Magicicada tredecim, a 13-year species that is very similar to M. septendecim.

The experiments confirmed how the wing-flick signals work, which in turn unlocked the whole process. A hopeful male will give a call, which for most Magicicada species consists of a sustained note that falls in pitch at the end. Then he will pause, watching and listening for a potential partner. If no one replies, he'll continue searching through the throng, often flying a short distance before trying again.

When a female does signal approval, the male will approach her, shifting to a faster series of calls with little pause in between. If another male tries to court the same female, the first male may sing over top of his rival's call, preventing the female from hearing the down-slurred ending that would entice her to reply.

When the male reaches his intended, he extends a tentative foreleg that often vibrates gently as he touches her. Then, if she allows it, he will climb aboard, shifting to a staccato song that lacks the down-slur. He keeps crooning until his body connects with hers.

Editor's note (May 28, 2021): This article was edited after publication to clarify when David Marshall believes the species M. septendecim and M. neotredecim split and the date of his first field season.