Chimps that experience the most dramatic human impacts have less behavioral diversity.
Image 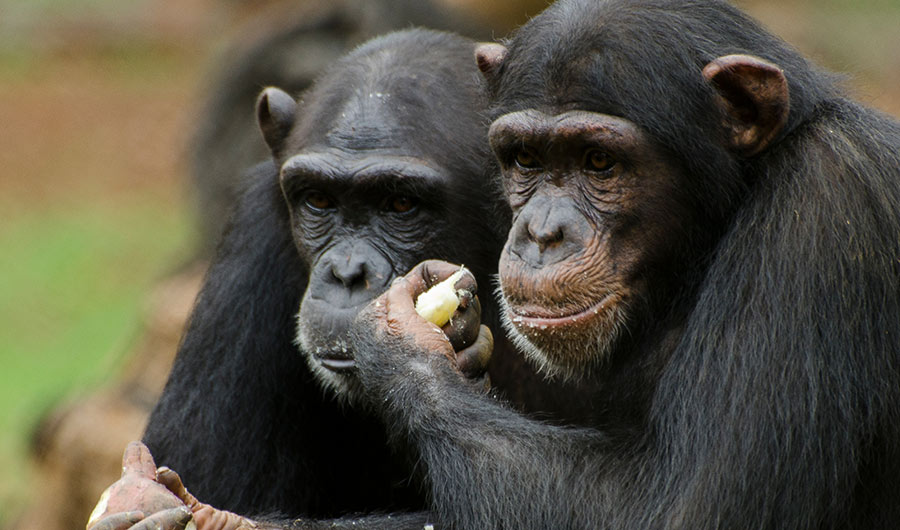 (Inside Science) -- Humans aren’t the only primates that can boast an incredible array of cultural behavior.

Chimpanzees in some places use sticks to fish termites from tiny holes while others don’t bother with tools for the same task. Some throw rocks against trees in a type of display scientists still don’t fully understand while others living in hot and dry areas dwell in the caves for protection against temperature extremes. Still others use a type of stone hammer and anvil to crack open the nuts they eat.

Now new research has found that humans may be having a direct impact on the incredible behavioral diversity among chimpanzees. Their findings may help inform and improve conservation efforts across the globe.

“[Chimp] populations living in the high-impacted areas always had a lower diversity of behaviors compared to those living in less impacted areas,” said Hjalmar Kühl, of the Max Planck Institute for Evolutionary Anthropology and the German Centre for Integrative Biodiversity Research, and the lead author of a study published today in the journal Science.

Chimpanzee populations are already dropping. The largest group, which lives in West Africa, declined by 80 percent between 1990 and 2014. But Kühl and his coauthors wanted to know whether these declines in number were matched by a loss in behavioral diversity or culture as well.

They compiled information on 31 different behavioral traits -- such as digging for tubers with tools, cave dwelling, and extracting honey -- in 144 chimp communities or social groups. On top of mining data already collected, the researchers conducted field work at 46 locations in 15 different countries from Senegal to Tanzania over nine years. They measured human impact by including factors such as the density of nearby human populations, development and roads, as well as by how much forest cover had been disturbed. They estimated behavioral diversity among chimps by measuring the number of the 31 chosen traits a given group exhibited.

Kühl said that humans may be contributing to the problem in other ways as well. One possibility is that the individual chimps in a given population exhibiting these behaviors are directly killed, since populations of chimps decline in general around humans.

Another is that humans eliminate the resources that chimps adapted special behaviors to exploit, either through deforestation or because we compete for some of the same resources. Over time, and without practice, the specialized chimp behavior eventually falls into disuse and is forgotten.

A culture for conservation

Kühl said the research shows that conservationists should take more than just numbers into account when considering which populations to protect. Small groups -- and sometimes even individuals -- can be critical in maintaining behavioral traits and passing them on to others.

“Biodiversity is not only species diversity, it’s also behavior diversity. You can’t just exchange one population for another,” he said.

Rebecca Kormos, a National Geographic explorer who has studied chimpanzees for more than a quarter century but who was not involved in Kühl’s recent study said the research adds an extremely important element to chimp conservation.

“[Culture] just adds another factor that we should look at when prioritizing what populations to protect,” she said, adding “we’re losing behaviors as well as losing individuals” due to human impact.

One such at risk population of chimps was recently discovered within the newly established Moyen-Bafing National Park in Guinea. Kühl and others observed the group's unique behavior of using long sticks to fish slimy snacks of nutritious algae from waterways similar to the way a vendor gathers cotton candy to serve it.

A Chinese company recently signed a contract to build the Koukoutamba dam in the area, which would swamp part of the area and could kill up to 1,518 chimps, according to the Wild Chimpanzee Foundation.

“The sad thing about the dam -- it is right in the middle of the park so it’s going to fragment these populations,” Kormos said. If populations are split by the dam and related infrastructure, “there’s less opportunity for one population to learn this behavior, and there’s a possibility that they might lose access to this resource.”

According to Kühl, the loss of any one behavioral trait may not impact a social group. But losing several could threaten the population.

“It’s likely that they do not do all these behaviors just for fun,” he said. “They need these things to survive.”

Kormos also worries whether the loss of culture will make chimpanzees less adaptable in the face of future challenges like any impacts of climate change. She speculates that larger behavioral diversity could help animals cope with long-term weather shifts.

Kühl said that while he and his colleagues studied the impact humans had on chimpanzee culture, it’s possible that we also have a negative effect on other animals with culture like whales, dolphins, birds or elephants.