Ice, Ice, Bacteria (Not Too Cold) 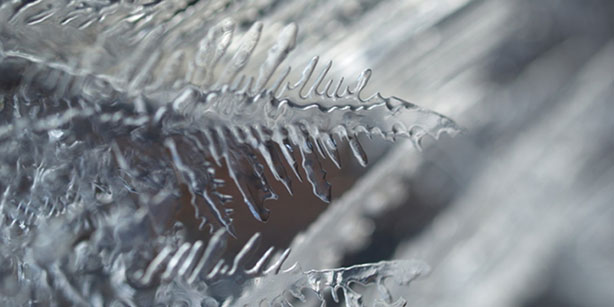 (Inside Science) -- Proteins can help grow teeth and bones in the body, crops in the ground, and even ice in the atmosphere. Some proteins have an uncanny knack for kick starting ice formation at unusual temperatures, and they have piqued the interest of people working in climate, agriculture and even mountain ski resorts where snow is created on demand. Now, new research shows how bacterial proteins interact with water molecules to form ice.

Bioengineer Tobias Weidner, leader of the surface protein group at the Max Planck Institute for Polymer Research in Mainz, Germany, who authored the new research, happened to hear a talk by a climate scientist about bacteria proteins in the sky that can control precipitation patterns. He was intrigued -- and found that no one had ever looked at these substances at a microscopic level.

Weidner and his colleagues worked with Pseudomonas syringae, a common bacterium that attacks plants by growing ice crystals, also known as frost, and allowing plants to catch infections -- even when temperatures are above freezing.

"These bacteria are like the fruit flies of the bacterial world," said Weidner. "They travel on the wind all over the planet, where they cause agriculture [plant growth] -- but they’re also found in the ice in remote areas of Antarctica where nothing can grow."

The scientists took sample fragments of the plant bacteria and created a film over water. Then they blasted intense laser beams with short pulses of just 40 femtoseconds -- that's the amount of time it takes light to travel just one one-hundredth of a millimeter --  over the sample to examine the atomic motion of the protein and water molecules as they dropped the experiment from balmy room temperature to near-freezing.

They watched as the water molecules became super-slow and transferred energy out of the surrounding water layers. While that is common in freezing water, it's not something that happens with protein structures. They call these proteins ice nucleators because they cause ice crystals to form around them.

"That's something never seen before with a protein," said Weidner -- and it could be useful for growing crystals and understanding how ice forms in clouds and causes rain. At room temperature the ice nucleators act like regular proteins.

The new experiment confirms what has so far only been suggested by theoretical models, said Tina Santl Temkiv, a post-doctoral researcher at the Stellar Astrophysics Centre at Aarhus University in Denmark. She was not involved in Weidner's research but has published studies showing that storm clouds can harbor ice-nucleating bacteria.

"Despite the potential importance of ice-nucleating proteins for cloud formation, the actual role of ice-nucleating bacteria in the atmosphere remains a mystery," she said.  "We need to know more on both the mechanism, in which the proteins cause freezing, as well as about their numbers and activity in the clouds." Temkiv said this study starts to show how the process works. "These bacteria are the most efficient ice-creators in the world."

Weidner is interested in pursuing the environmental implications of the proteins' unique abilities in assisting ice formation under low-pressure and other atmospheric conditions at the elevation of clouds. He pointed out that when particles of dust or soot are present in the atmosphere, ice crystals can form around them, but that only begins at temperatures around -20 degrees Celsius. These bacteria can freeze water at temperatures much closer to the familiar zero degrees Celsius freezing point, around -5 degrees.

"We want to know what this could mean for climate models," said Weidner.

Brent Christner, a microbiologist at Louisiana State University in Baton Rouge who also studies ice-nucleators, said that scientists still understand very little about the precise way in which these proteins interact with water molecules and limit supercooling -- the process by which water or another liquid can drop below its freezing point without turning solid. So the new work appears to be contributing on this front. Plus, he said, the applications for the new bacteria could be wide: "Substances that enhance the growth of ice crystals could offer new possibilities for a number of agricultural, biomedical, and industrial applications."