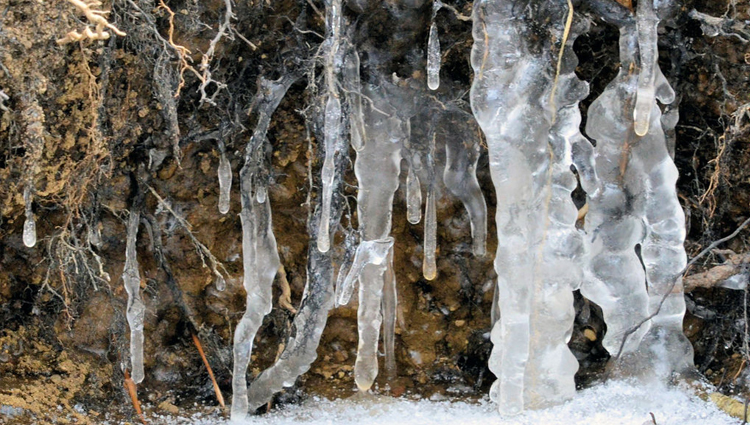 (Inside Science) -- Look out your window at the icicles beginning to grow on the edges of roofs and car bumpers, and you might think that all icicles are shaped the same -- long, straight and pointy.

But Canadian scientists have found that subtle differences in wind and water can produce icicles with strange shapes. Using an indoor icicle-making machine, the researchers have challenged a mathematical theory claiming that all icicles tend to grow towards the idealized cone-like shape they have in cartoons.

"The ideal icicle, the mathematically-minimum icicle, is elegant and beautiful," said icicle grower Stephen Morris, a physicist at the University of Toronto. "But the reality has turned out to be much more complicated."

An icicle grows because it is wet. As water runs down the surface of an icicle in a thin film, some freezes in the cold air, and the rest drips off the tip -- which isn't actually pointy but, under a magnifying glass, concave like an upside-down cup.

At the University of Arizona, Tucson, physicist Martin Short claimed last year that all icicles tend to grow towards an ideal shape and provided the physics rules needed to explain this shape.

Having grown up in the Southwest United States, Short has seen few icicles in his everyday life. He was inspired to study the winter phenomena after years of visiting Arizona caves and studying stalactites, which are also created by dripping water and grow downwards.

The secret to the icicle's long and pointy form, he suggests, is the air around it. As dripping water freezes on the surface of an icicle, it releases heat into its surroundings. In still air, this warm air should rise, forming a blanket around the icicle. The tip stays colder than the base, keeping the top from growing wider as the wet tip freezes and elongates.

This effect, according to Short's calculations, should guide icicles towards a shape that tapers from wide to narrow according to a specific mathematic function.

"Most icicles should have this shape," said Short. "They want to have this specific (cone-like) form."

But Morris wasn't convinced by the seven photographs of icicles Short looked at to test this theory.

"We wanted to drive around and collect 100 icicles from roofs (to test the theory)," he said. "But that turns out to be not that easy to do."

Instead, he and Antony Szu-Han Chen built a device to grow 93 icicles under a variety of different conditions and different water sources. At the top of the device, a nozzle sprinkled water onto a growing icicle hanging from a platform that rotated rotisserie-style. The rotation, too slow to affect the shape of the icicle, helped to expose all sides of the growing icicle equally to a fan's cold breeze.

"It's like meat on a spit at a barbecue," said Morris. "We rotate it (one revolution every four minutes) to give the same treatment to all sides."

The type of water also affected the shape. Icicles grown from tap water tended to bend and bulge.

Explaining this may require a closer look at these icicles, said Kazuto Ueno of the University of Quebec in Chicoutimi.

Instead of studying the overall shape of icicles, Ueno focuses on how the thin film of water freezes on the surface of an icicle. He hopes to inspire better ways to combat icing problems on power lines and aircraft wings.

The surface of an icicle isn't always smooth. It's often covered with tiny ring-like ripples. In 2003 Ueno discovered that these ripples are always spaced the same distance apart.

"The distance between two peaks of ripples always measures around a centimeter scale, which is almost independent of air temperature, water flow rate and airflow," said Ueno, who developed a theory to explain this based on the surface tension of the water.

In Morris' experiments, published online to arxiv.org, these ripples appear to crawl up the sides of growing icicles as new ice is added. This was predicted by Ueno's theory, but the ripples, like the overall shape, are still not completely understood.

By putting theories to the test, the icicle-making machine may have raised more questions than it answered. But that's all part of the scientific process for Morris, who has spent a career exposing the complexity of objects in nature -- from sand dunes to turbulent water.

"Some say you can see the world in a grain of sand," said Morris, quoting British poet William Blake. "I can also see it in an icicle."

Protests, A Retracted Paper, and a Super-Earth Planet
Why Is an Empty Shampoo Bottle So Easy To Knock Over?
COVID-19 Vaccine, Monkeys and Bumblebees
Smart Speakers Could Detect Cardiac Arrest
Light And Art Come Together
END_OF_DOCUMENT_TOKEN_TO_BE_REPLACED