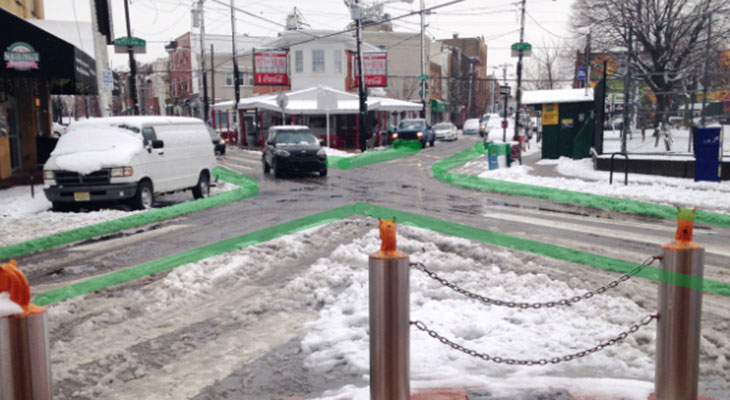 (Inside Science) -- Large swaths of America’s densely packed urban areas are completely unused, but it’s only in winter that car tracks and footprints in the snow make it obvious.

This is in large part because most city streets like those in Philadelphia, New York and Chicago were designed decades ago when the only real consideration was getting cars from point A to point B as quickly as possible, said Jon Geeting, the engagement editor at PlanPhilly and advocate for traffic calming measures.

“Anything that made cars slow down was seen as a bad thing,” he added, “So naturally lots of space was assigned to car traffic.”

Other experts agree with Geeting.

“There was an assumption in the 30s and 40s that a town planner could do no wrong in devoting more space to automobiles,” said Matthew Roe from the National Association of City Transportation Officials.

But as the snow begins to accumulate, it becomes apparent that much of this space is superfluous to the motorist’s needs. The patches of snow left unblemished by cars effectively widen the sidewalk, and photographs of this phenomenon have enjoyed enough viral fame that social media has granted it a name: Sneckdown. It’s a homogenization of the words “snow” and “neckdown,” which is a road design that aims to slow traffic.

In parts of the country that don't receive snow, rarely used road areas are often called dirty zones, said Roe, due to the trash and dirt that tend to collect there.

Last winter Geeting traipsed through the snow to take pictures of sneckdowns in his Philadelphia neighborhood, an area he says would especially benefit from more recreational space. “South Philly is notorious for a lack of green spaces.”

Roe estimates as much as 75 percent of any given city’s publicly owned spaces are its streets and avenues. Scale up the sneckdown on your block, he said, to consider the rest of the city and it presents a significant space to review and put to better use. It also offers an opportunity to kick-start economic renewal and gentrification, he added.

Some cities in the U.S. have already begun to re-imagine intersections.

“In New York they’ve put out planters to make them green spaces, which also helps with storm water absorption too. Other places are beginning to follow suit as well,” said Geeting.

Back in 2006 Roe worked for the New York City Department of Transportation, where he was involved with the Plaza Project, which initiated a transformation of these wasted spaces into more useful public areas.

“We began experimenting in 2006 with the edges of streets and by 2008 we had a more comprehensive remit,” he said.

They decided not to rebuild curbs further into the street to widen sidewalks — that would have been too costly and disruptive. “We repurposed the road with paint, gravel or plants. Motorists tend to respect those boundaries just like a curb anyway,” said Roe.

The city's transportation department added street furniture like patio chairs, tables and planters. They then partnered up with local business improvement associations, which are often happy to take responsibility of maintenance — hoping the improvements will bring new customers with them, said Roe.

One of the more successful redesigns that the city's transportation department likes to boast is the Broadway – Fifth Avenue intersection in Manhattan, which re-routed traffic flow to provide a sizable seating space.

“It’s great that New Yorkers in the neighborhood have a place to eat and lunch or just chat,” said Roe. In his mind, the project is intrinsically linked to the economic revival of the area, including the 2011 opening of a gargantuan and upscale Italian food hall. “It’s hard to imagine Eataly there without all the plazas.”

The Plaza Project hasn’t received sizable resistance, but that’s not to say that such schemes aren’t without their concerns.

“You’ll get a push back from fire departments that need to get big trucks through and fast,” said Geeting, “Whenever a new intersection is designed, they’ll lobby for the largest space.”

Political will in some city governments and transport departments can also be in short supply, said Roe.

What is holding the rest of New York and other cities back, pondered Roe, “A lot of it is either lazy or nonexistent planning.”

Researchers Study Violinists To Learn How Humans Act in Synchrony
Alligators May Be Able to Survive Venomous Snake Bites
New Theory Says We’ve Been Wrong About How Bubbles Pop
Crustacean Genes May Solve Debate Over How Insects Evolved to Fly
Some Beetles Survive Being Eaten, New Study Finds
END_OF_DOCUMENT_TOKEN_TO_BE_REPLACED

COVID-19 Vaccine, Sharks and Mezcal
Crabs Use Belly Sounds To Communicate
Touring The Trinity Test Site
Protests, A Retracted Paper, and a Super-Earth Planet
Why Is an Empty Shampoo Bottle So Easy To Knock Over?
END_OF_DOCUMENT_TOKEN_TO_BE_REPLACED