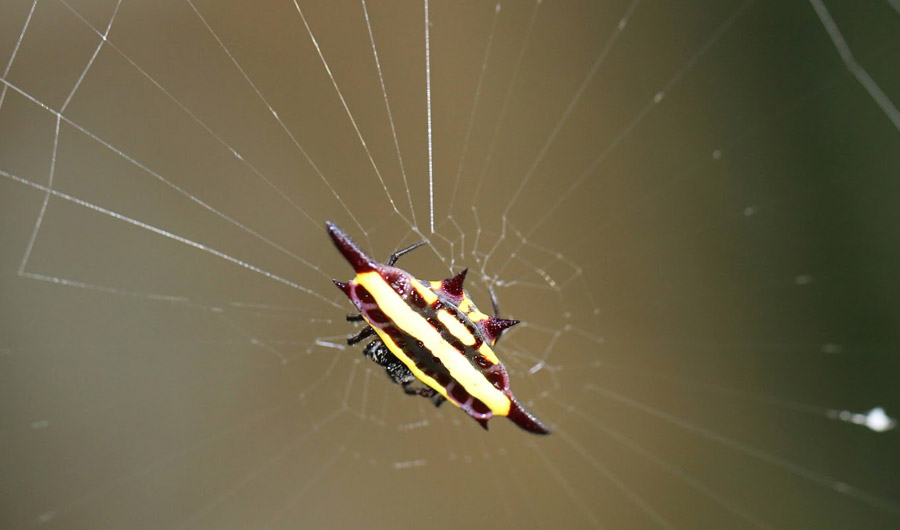 A spider of the species Gasteracantha fornicata sits in its web in the Australian rainforest.

(Inside Science) -- In the Australian rainforest, flashy spiders mimic flowers to attract hungry insects into their 6-foot-wide webs. The striped backs of the spider Gasteracantha fornicata, or northern jeweled orb-web spider, act as deceptive traps for flies and bees, a new study finds.

The nickel-sized spiders sit in the center of their large webs, with their wide white-and-black or yellow-and-black stripes conspicuously displayed against the green forest. This visibility led study lead author Tom White, an evolutionary biologist at the University of Sydney, to wonder why the spiders would want to be so noticeable.

Predators that disguise themselves as flowers, such as the orchid mantis, are well studied in the insect world. But it was not clear whether this was the northern jeweled orb-web spiders’ strategy. Previously, researchers suspected two possibilities. Either the spiders might simply be taking advantage of insects’ natural preferences for certain colors, or the spiders were deceiving the insects into believing they were flowers.

The designs found on the spiders’ backs probably do not look much like flowers to people. But pollinating insects view flowers differently: They extract little cues about a blossom’s color, symmetry and orientation and piece them together to identify their sources of food. “If you just tap into a couple of those little cues and exploit those, you can get away with not being a perfect copy,” said White.

To test if this is what the spiders were doing, the researchers cut out tiny ovals, crosses and asymmetrical “L” shapes from card stock printed all black, all yellow or with black-and-yellow stripes, for a total of nine different styles, a common way researchers mimic flowers to test food preference for bees. The researchers trekked out into the forest and taped these different shapes onto the wide, flat backs of wild spiders in their natural habitat -- between 17 and 29 spiders for each design. They also placed clear tape on a group of spiders as a control, leaving their natural shapes and colors exposed. Then, they paced along transects in the forest, watching the webs and counting how many insects each spider trapped.

“Usually we think in terms of [bees] finding things they want,” said Jessamyn Manson, an ecologist who studies plant-pollinator interactions at the University of Virginia and was not involved with the study. “This is, unfortunately [for them], finding things they don’t want.”

Spiders wearing the symmetrical oval or cross-shaped cutouts that included yellow caught the most insects -- as many as the “naked” control spiders. Since native Australian bees are black, not black and yellow like bumblebees or honeybees, it’s unlikely the spiders were masquerading as fellow bees, White said.

The results show that both color and shape matter. If the yellow color alone attracted insects, then spiders wearing asymmetrical, all-yellow “L” shapes would have attracted more prey than the spiders wearing black-and-yellow striped ovals or crosses. But this was not the case. The symmetrical ovals and crosses were more attractive to prey than asymmetrical “L” shapes, regardless of whether they were all yellow or black and yellow. Spiders wearing all black in any shape attracted the fewest insects, likely because it’s not a common color for flowers and hard to see in the forest.

Previously, no one could say for sure how the appearance of northern jeweled orb-web spiders improved their catch; this study clearly reveals that their floral mimicry helps, said Mariella Herberstein, a biologist at Macquarie University in Sydney, Australia, who has collaborated with the study authors in the past but was not involved in this project.

Douglas Tallamy, an entomologist at the University of Delaware who was not involved with the work, was surprised that the researchers were able to tap accepted sensory cues like color and shape, which are known to influence insect behavior, to uncover a predatory strategy “that has not really been recognized before.” Other spiders such as the spiny-bellied orb weaver, an American forest dweller that also is black and white or yellow and lives alone in large webs, hint that this kind of floral mimicry may be more widespread, but confirming that would require further research, he said.

The relationship between the northern jeweled orb-web spiders and their insect prey emphasizes the interconnectedness of food webs, said Tallamy. These spiders attract insects interested in small white or yellow flowers. If any part of that chain disappears, from the flowers to the insects to the spiders, the rest of it may fall apart, he said.

These findings were published online May 8 in Evolutionary Ecology.

Editor's Note: This piece was produced with support from the National Association of Science Writers’ David Perlman Mentoring Program. 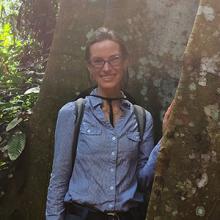 Veronica E. Tremblay is an editor and research administrator at King Abdullah University of Science and Technology, on the Red Sea coast of Saudi Arabia, and a graduate student in the MA in Science Writing program at Johns Hopkins University. Veronica enjoys exploring new places, going on desert hikes with her family, and doodling. Her greatest guilty pleasure is ramen noodles.